Jefferson poised down the stretch 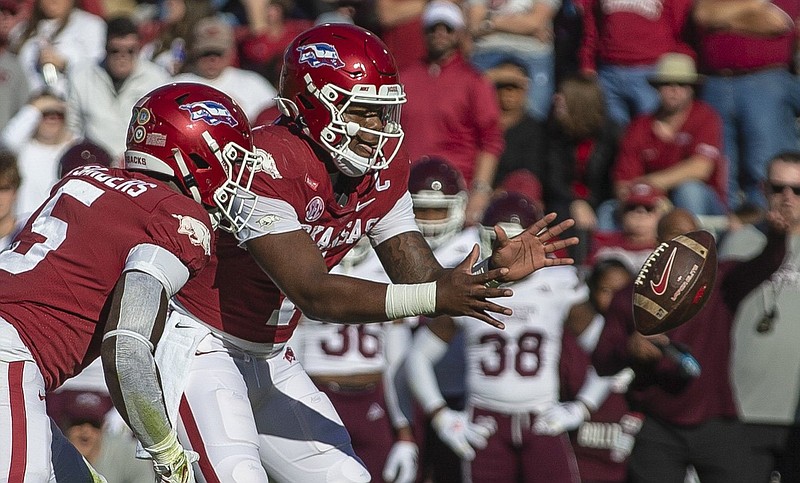 KJ Jefferson led Arkansas on a 75-yard scoring drive in the closing minutes of Saturday’s victory over Mississippi State. (Special to the NWA Democrat-Gazette/David Beach)

FAYETTEVILLE -- KJ Jefferson has shown the ability to be effective in the two-minute drill as the University of Arkansas quarterback.

In 10 starts the past two seasons, Jefferson has led 75-yard drives in three games that gave the Razorbacks a chance to win in the final seconds.

Saturday, Jefferson and the Razorbacks finally got to celebrate a last-second victory involving those clutch drives after two heart-breaking losses.

The Razorbacks held on to beat Mississippi State 31-28 after they went 75 yards in 10 plays in a 2:01 span, capped by Dominique Johnson's 4-yard touchdown run with 21 seconds left and his subsequent two-point run.

Jefferson, a redshirt sophomore, completed 6 of 7 passes for 45 yards on the drive.

Earlier this season, Ole Miss beat Arkansas 52-51 when Jefferson's pass on a two-point attempt fell incomplete after his 9-yard touchdown pass to Warren Thompson with no time left capped a 75-yard drive in nine plays in 1:07.

Jefferson completed 7 of 8 passes for 70 yards on that drive.

Missouri beat Arkansas 50-48 last season on a field goal on the game's final play to overcome the Razorbacks' 75-yard, 13-play drive in 4:04 in which Jefferson was 5 of 8 for 48 yards, including a 14-yard touchdown pass to Mike Woods with 43 seconds left.

Jefferson and Woods then connected on a two-point conversion to give Arkansas a 48-47 lead.

Mississippi State had a chance to send Saturday's game into overtime, but Nolan McCord missed a 40-yard field goal attempt wide left on the final play.

"I was watching the whole time," Jefferson said. "Actually I was just leaning over the field a little bit, so I was anxious."

"I love him," Pittman said. "I mean, he was so poised in that two-minute drive.

"I think once you do it, you become more confident. I'm not saying I knew we were going to go down and score, because that's a lie, but I felt confident that if we got the first first down in that drive, and we did it fast, I felt like we could score."

The Razorbacks got a first down on two plays on their game-winning drive when Jefferson hit Johnson for a 7-yard gain, then Johnson ran for 11 yards.

Arkansas had two timeouts when it faced fourth and 1 at the Mississippi State 25 with 1:05 left.

Pittman said he kept saying on the headset to offensive coordinator Kendal Briles to get the first down rather than try for a big play.

Jefferson's pass fell incomplete, but Mississippi State cornerback Martin Emerson was called for holding receiver Treylon Burks, which gave Arkansas a first down at the 15.

"I saw the guy tackle Treylon and I just had to put the ball in the area and make it seem like he couldn't get to the ball," Jefferson said. "I knew the flag was coming."

Pittman said he saw the flag but wasn't sure if the call was against the Razorbacks or Bulldogs.

"Somebody up top said they got a holding call," Pittman said. "I figured at that point we'd have a pretty good chance to score."

Tight end Trey Knox, who had been slowed by an ankle injury he suffered at Ole Miss, had three catches for 13 yards on the final drive.

"Trey stepped up big in that two-minute situation," Jefferson said. "He just took advantage of his opportunity like Dominique did.

"Just knowing I have a weapon like Trey out there on the field, I can give him the ball and he's able to make people miss in space, get positive yards."

Johnson said Jefferson gave his teammates confidence in the huddle before the final drive.

"He's the leader of our offense and also a captain on this team," Johnson said. "So that was big for him to go in the huddle and say, 'Hey, we're going to go down here and we're going to score.'

"Then to have the confidence and poise to go out there and do what he did for us."

"KJ, he just really has gotten better," Pittman said. "He's poised, and he's a heck of a quarterback."