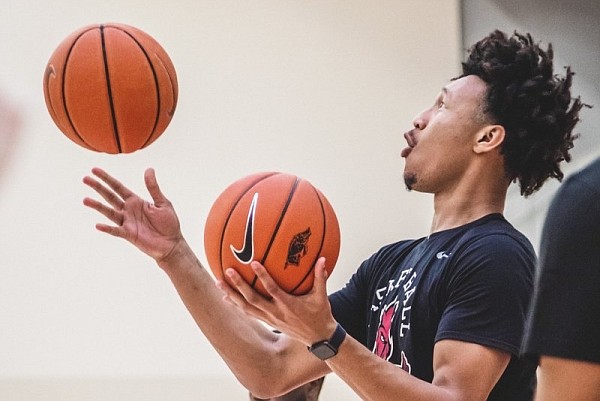 Arkansas sophomore Jaylin Williams juggles basketballs, which is part of the Razorbacks’ pregame warmup routine that was instituted by Coach Eric Musselman, who learned it from father. (Photo courtesy of the University of Arkansas)

FAYETTEVILLE -- Fans attending the No. 16 Arkansas Razorbacks' season opener against Mercer will want to be in their Walton Arena seats at least 30 minutes before the 7 p.m. Tuesday tipoff to see the show before the game.

The Razorbacks will go through an elaborate pregame warmup routine that University of Arkansas Coach Eric Musselman has patterned after what his late father, Bill Musselman, did with his teams at Ashland (Ohio) College and Minnesota.

"Does this add an element of entertainment for our fans? Absolutely," Musselman said. "It's not a normal two-line layup drill.

"Nine of our players have learned to juggle three basketballs. Most of our team can all spin the ball on their finger.

"There's a lot of two-ball dribbling. Just a lot of skill stuff that we've worked on. Then it's well choreographed."

The Razorbacks have worked on the drills during practice.

"It's been really cool, it's been really fun," junior forward Kamani Johnson said. "You never know what to expect with Coach Muss, so it's another one of those crazy things he brought to us and we just all thought it was cool and fun."

Senior forward Trey Wade said he's anxious to show he's a better ball-handler than a lot of people might think.

"I've got some tricks up my sleeve, so I'm pretty excited about the warmup," Wade said. "I think it's big for our team as far as being concentrated before the game and having focus. It will be a big deal for us."

Bill Musselman led Ashland, an NCAA Division II school, to a 109-20 record in five seasons from 1965-66 through 1969-70, but it was the Eagles' pregame warmup routine that resulted in Sports Illustrated doing a story on the program in December 1969.

"The Ashland Eagles are college basketball's greatest showboaters," according to the Sports Illustrated article. "It is their pregame act that drives the people wild and causes a kind of collective schizophrenia that in the minutes between warmups and the game turns Eagle players from troupers to grinding, selfless defensive robots and their fans from carefree shriekers to tense nail-biters.

"The scriptwriter for the show is Bill Musselman, 29, a bright man in his fifth season whose short muscular frame and light close-cropped hair are archetypal of proper coachly appearance, even if his scenario is not.

Eric Musselman said the fan interest created by Ashland's pregame routine -- along with his father's .845 winning percentage -- helped him land the Minnesota job.

"They wanted to try to fill up Williams Arena," Musselman said of Minnesota's basketball facility which in the 1970s had a seating capacity of 18,000. "They had some years of bad attendance."

According to the Minneapolis Star-Tribune, the Gophers averaged 7,202 fans in the five seasons before Bill Musselman's arrival and 16,004 in his four seasons when he led Minnesota to a 61-32 record before leaving to coach in the ABA.

"Fans filled Williams Arena an hour before tipoff to make sure they didn't miss the warmup," according to a 2015 Star-Tribune article. "Games became so popular that the school moved overflow crowds to the hockey rink adjacent to Williams Arena and showed the game on closed-circuit TV. Some nights fans left immediately after the warmup."

After Bill Musselman died in May 2000, Eric -- an NBA assistant coach for the Orlando Magic at the time -- went to his father's Sarasota, Fla., home to go through his personal belongings.

Eric Musselman found an old suitcase in the back of a closet.

"The only thing in the suitcase was the exact instructions on how to teach the warmup," Musselman said of his father's hand-written and typed notes. "That was the first time I had ever seen it."

Musselman had his team at Nevada perform the drills early in the 2015-16 season and decided now is a good time to have the Razorbacks do it.

Musselman said the routine is about more than entertainment, that the drills also help make the players better.

"Anybody that knows any history about my father, probably the most old-school, disciplined coach that there ever was," Musselman said. "He wanted to be organized. He wanted his players to have great fundamentals handling the basketball.

"He wanted his team to be locked in, and the warmup helped with skills as well."