ARKANSAS SIGHTSEEING: Five cemeteries in Arkansas honor the sacrifices of our service members 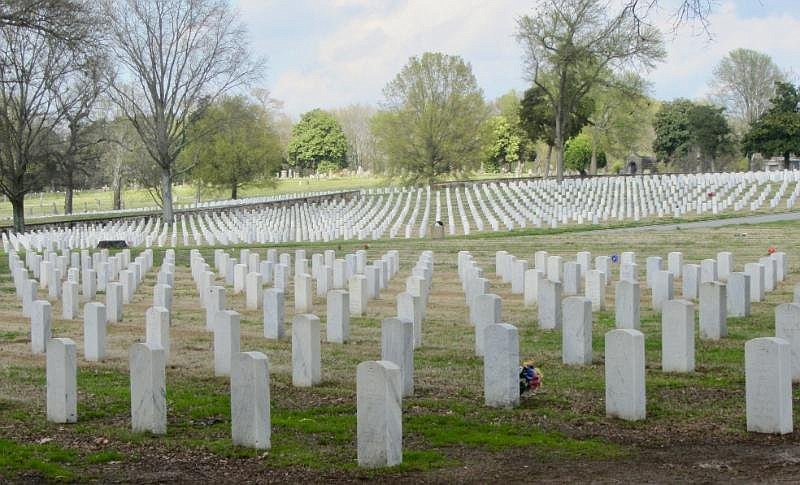 The three oldest of the five Arkansas cemeteries for military veterans were founded just after the Civil War. The two newest opened earlier this century.

All five share an air of solemn serenity, befitting the honor due the hundreds of thousands of Arkansans who have served during war and peace in the Army, Navy, Marines, Air Force and Coast Guard. Their resting places will come into focus Thursday on Veterans Day, which began in 1919 as Armistice Day and took its present name in 1954.

The respect these men and women earned is echoed by a monument at North Little Rock's Arkansas State Veterans Cemetery. It bears Abraham Lincoln's 1863 Gettysburg Address, whose 272 words fill just 14 lines of large type on the plaque. One passage key notes the troops' endeavors:

"The brave men, living and dead, who struggled here, have consecrated it, far above our poor power to add or detract. The world will little note, nor long remember what we say here, but it can never forget what they did here."

The vast majority of the more than 60,000 graves and columbaria at the five Arkansas cemeteries hold the remains of veterans who completed their military service and in many instances lived into old age. That doesn't diminish their role as citizens who did their patriotic duty, whether they served as volunteers or were drafted. Details on all five of the burial sites can be found online.

When Fayetteville National Cemetery opened in 1867, remains were interred from the Civil War battlefields of Pea Ridge, Prairie Grove, Cane Hill and Fayetteville. Sections were marked for Union troops from Arkansas, Illinois, Indiana, Iowa, Kansas, Missouri, Wisconsin and for "Indian" soldiers. Recent additions include a carillon donated by the Military Order of the Purple Heart Service Foundation in 2000. The address is 700 S. Government Ave.

Fort Smith National Cemetery, also dedicated in 1867, grew around a small military-post cemetery dating to about 1819. A noted burial here is Isaac S. Parker, known as "the Hanging Judge" for the 151 death sentences he handed down from the federal bench. Also buried on the site is Brig. Gen. William O. Darby, famed leader of World War II's Darby's Rangers. A carillon given in 1986 by AMVETS (American Veterans) sits at the main entrance. The cemetery is at 522 Garland Ave. and South Eighth Street.

After Little Rock National Cemetery opened in 1868, 5,400 Civil War remains were brought for interment from DeValls Bluff, Lewisburg, Marks Mills and other battle locales. About half the bodies were unidentified. A former Confederate burial ground on the site was renamed in 1913 as the Confederate Section. A prominent cemetery feature is the Minnesota Monument, dedicated in 1936 to honor the 36 soldiers resting here from that northern state. The address is 2523 Springer Blvd. 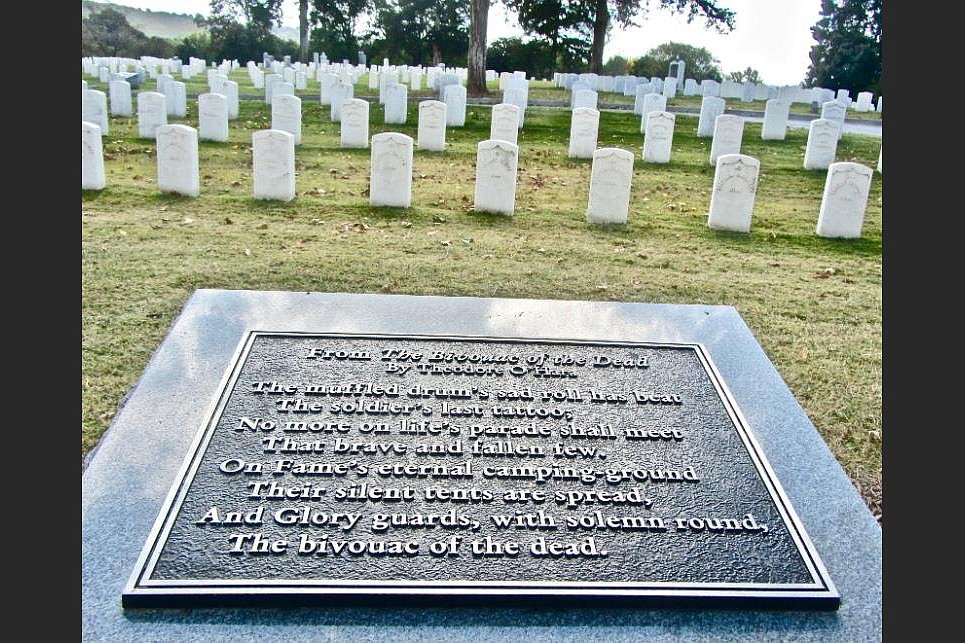 An elegiac poem, “The Bivouac of the Dead,” is engraved at Fayetteville National Cemetery. (Special to the Democrat-Gazette/Marcia Schnedler)

Arkansas State Veterans Cemetery at North Little Rock, 1501 W. Maryland Ave., opened in 2001 on an 82-acre site near North Little Rock Airport. One novel feature is a Global War on Terror Memorial, installed in 2018. Land transferred from Camp Robinson a year ago increased the cemetery's size from 82 acres to 223 acres. The expansion is expected to provide burial space for another century.

A Cross County hamlet is the site of the newer Arkansas State Veterans Cemetery at Birdeye, opened in 2012 off Arkansas 163. As in the other cemeteries, some tombstones carry brief personal inscriptions. For 91-year-old Lt. Col. Bob McGough, a World War II aviation cadet, the message notes that he spent time as a German prisoner of war. He is lauded, in words spanning three generations, as "loving husband, father, paw paw."

Jack Schnedler served as an Army information specialist in 1967-68. His entire tour of duty was spent at Fort Knox, Ky. He never saw the gold.

CORRECTION: Arkansas State Veterans Cemetery at Birdeye opened in 2012. The year was misstated in an earlier version of this story.