Public forums in Bentonville to inform search for next college president 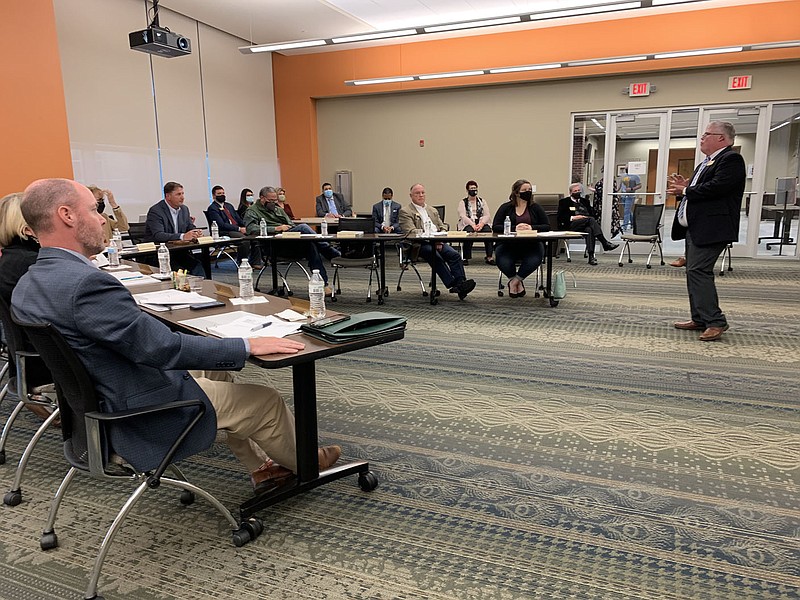 BENTONVILLE -- Northwest Arkansas Community College will be featuring public forums Nov. 16 to help shape the search for the college's next president, administrators said.

Forums will be held in the White Auditorium of Burns Hall on the college's campus at 9 a.m. and 2 p.m. for faculty and staff, 11 a.m. for students and 4 p.m. for the community, said Ron Branscum, Board of Trustees chairman, Monday during a board meeting.

"The goal of it will be to have an approved presidential profile," he said.

Representatives from search firm Association of Community College Trustees out of Washington, D.C., will be present for the forums and will use gathered information to help inform the search to replace Evelyn Jorgenson, NWACC president.

Jorgenson, 69, has worked in education for 48 years and began as the college's third president in 2013. She'll retire when her contract ends June 30.

The search for Jorgenson's replacement will begin once the presidential profile is formed, Branscum said.

The search firm will select five to seven semifinalists and will present three to five candidates for the board to choose from for the next president, he said.

A finalist for the college presidency is projected to visit the college in March, Branscum said. The board plans to select a new president in April. The process could start over if they're initially unable to find a good fit for the position, he said.

The president's position won't be the only role to fill on the college's administrative staff, as Todd Kitchen, Student Services vice president, said he's accepted a position as the new president of Cuyahoga Community College's Eastern Campus in Ohio.

Kitchen met with Cuyahoga Community College students, faculty and staff in a pair of town halls last month, according to an announcement from the college. He'll join the Cuyahoga faculty in the fall.

"I owe you all a debt of gratitude," Kitchen told administrators and the Board of Trustees at the meeting, adding the opportunity to serve as a president on Cuyahoga's staff wouldn't have been possible without the years he served at NWACC.

In other news, Jorgenson said the state's nine independent colleges have formed the Consortium of Arkansas Independent Colleges to help create a united voice in the state.

The consortium will allow the colleges to collaborate on areas such as legislative advocacy, operational best practices and professional development for employees and trustees, Jorgenson said.

The consortium will also provide an opportunity for the colleges to come together to effect change in areas that impact all their students and staff, she said.

"We could speak with one voice and carry more clout," Jorgenson said.

Meeting business also included the election of new board officers.

The board voted 8-0 to elect DeAnne Witherspoon as board chairwoman, Mark Scott as vice chairman and Rachel Harris as secretary.

Board member Mauricio Herrera was absent.

Witherspoon previously served as vice chairwoman, and Scott was the board's former secretary.

Northwest Arkansas Community College will feature a fundraising fun run at 8 a.m. and a 5K at 8:30 a.m. on Nov. 20 on the Bentonville campus in support of the college’s cross country running program.

Register for the event online at https://runsignup.com/Race/AR/Bentonville/NWACCEagle5K