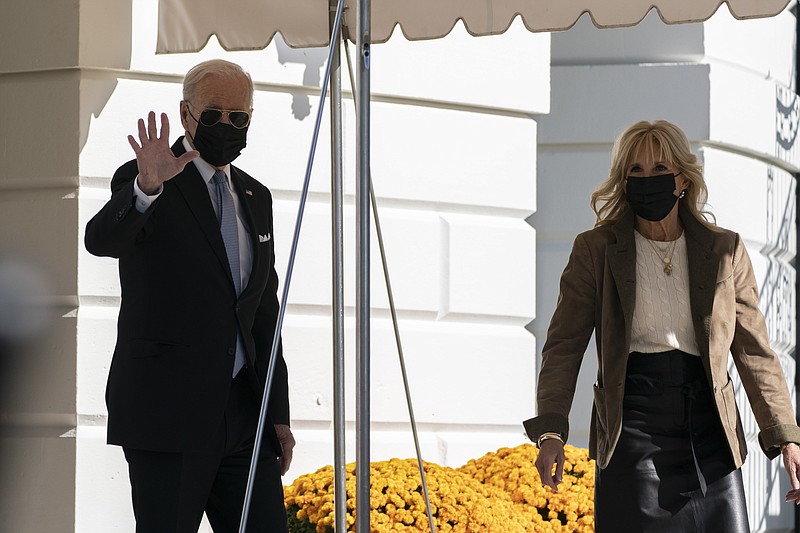 President Joe Biden, and first lady Jill Biden walk to board Marine One on the South Lawn of the White House in Washington, Saturday, Nov. 6, 2021. Biden is spending the weekend at his home in Rehoboth Beach, Del. (AP Photo/Alex Brandon)

WASHINGTON -- The Biden administration is encouraging local school districts to host clinics to provide covid-19 vaccinations to kids and information to parents on the benefits of the shots as the White House looks to speedily immunize those ages 5 to 11.

First lady Jill Biden and Surgeon General Dr. Vivek Murthy on Monday visited Franklin Sherman Elementary School in McLean, Va. -- the first site in the country to administer the polio vaccine, in 1954 -- to launch the campaign to promote child vaccinations.

The visit came just days after federal regulators recommended the covid-19 vaccine for the age group. The White House says the first lady will visit pediatric vaccination clinics across the country over the coming weeks to encourage the shots.

[Video not showing up above? Click here to watch » arkansasonline.com/119schools/]

"The vaccine is the best way to protect your children against covid-19," she told parents in the school's cafeteria after touring a clinic in the gymnasium that vaccinated 260 students. "It's been thoroughly reviewed and rigorously tested. It's safe. It's free. And it's available for every child in this country, 5 and up."

Health and Human Services Secretary Xavier Becerra and Education Secretary Miguel Cardona are sending a letter to school districts across the country calling on them to organize vaccine clinics for their newly eligible students. The officials are reminding school districts that they can tap into billions of dollars in federal coronavirus relief money to support the pediatric vaccination efforts.

The Biden administration is providing local school districts with tools to help schools partner with pharmacies to administer shots. And it's asking schools to share information on the benefits of vaccines and details about the vaccination process with parents, to counter disinformation surrounding the shots.

The White House is encouraging schools to host community conversations and share fact sheets on the vaccines and is working with the American Academy of Pediatrics to partner local physicians with schools aiming to share science-based information about the shots.

"Parenthood and worrying go hand-in-hand -- it's just what we do," the first lady told parents. "So I can't promise you that the dangers of the world will become any less frightening. Just wait until your kids start driving! But with this vaccine, we can take away at least one of those worries. A big one."

About 28 million kids 5 to 11 are newly eligible for shots now that the Pfizer vaccine is approved for them. The White House says the federal government has procured enough of the two-dose vaccine for all of them.

A Pfizer study of 2,268 children found the vaccine was almost 91% effective at preventing symptomatic covid-19 infections. The Food and Drug Administration studied the shots in 3,100 vaccinated children in concluding that the shots are safe.

While kids are less likely than adults to develop severe covid-19, with the delta variant they get infected and transmit "just as readily as adults do," Dr. Anthony Fauci, the government's top infectious diseases expert, said at a recent White House briefing.

Since the pandemic began, at least 94 children 5 to 11 have died from covid-19, more than 8,300 have been hospitalized and more than 5,000 have developed a serious inflammatory condition linked to the virus.

In 1954, working- and middle-class families lived in McLean, many over several generations, said Lonergan, now 75, who can still recall when the first upscale subdivision was built, with homes offered for $34,000. Lonergan and the neighborhood's other children roamed one another's rolling yards and ventured to the variety store "downtown" to buy sodas and candy bars.

"There was so much freedom and so little fear," she said.

Lonergan's father, a carpenter who had served in the Navy during World War II, purchased a half-acre lot on Old Chesterbrook Road for $500 and built the family home himself, next door to her grandparents.

Lonergan's mother had also attended Franklin Sherman as a child, and her uncle taught there, too. In 1954, the school, led by Principal Ruby Dunkum, was still new but was already bursting with little baby boomers, with some students attending classes in steel Quonset huts.

Yet the devastation of polio lurked at the edges of Lonergan's otherwise idyllic childhood bubble. She recalled a boy in her class with a shriveled leg and seeing people lumbering in leg braces while she was out shopping with her mother.

In 1952, cases of the polio virus had peaked at nearly 58,000 in the United States, with more than a third of sufferers dying or left paralyzed.

Unlike covid-19, polio afflicted mostly very young children, who spread it asymptomatically during the summer months through fecal matter due to poor hand hygiene. Parents lived in fear that their children would be crippled, killed or confined to an iron lung -- making vaccination more appealing than in today's pandemic.

Children can spread the coronavirus but are rarely hospitalized or die. In Virginia, 237 children have been hospitalized with covid-19, and just one has died since March 2020.

In 1938, President Franklin D. Roosevelt, who had lost the use of his legs after a polio diagnosis as an adult, co-founded the National Foundation for Infantile Paralysis, later renamed the March of Dimes, to combat the disease. Fifteen years later, in 1953, American virologist Jonas Salk, whose research the foundation had funded, announced a breakthrough -- the creation of a safe polio vaccine that he had successfully tested on his own children.

The stage was set for a sprawling national trial involving about 600,000 schoolchildren who would receive either the real vaccine containing killed virus or a placebo. Another million or so children, who did not receive a shot, formed a second control group and were kept under observation.

In the weeks before the trial began, D.C. officials pulled out of the plan that would have made the nation's capital the first vaccine site. Montgomery County in suburban Maryland withdrew soon after. Then in early April, influential radio personality Walter Winchell issued an on-air warning.

"In a few minutes, I will report on a new polio vaccine. It could be a killer," he said, spooking parents and school officials across the country.

Fairfax County, however, persisted, and at 9:35 a.m. on April 26, 1954, a Franklin Sherman second-grader named Randy Kerr became the first child in the nation to be vaccinated.

Lonergan's family doctor, Richard Mulvaney, a no-nonsense former Army doctor who had won a Bronze Star during the Korean War, was heralded as a campaign hero.

The photo of the physician vaccinating Lonergan, who recalls barely flinching, became a March of Dimes poster, among those featuring the newly minted "Polio Pioneers."

The trial achieved its goal: Sixty-five years later, the United States and most of the world are polio-free.

In Tennessee, business leaders unhappy with recent efforts by the Republican-led Legislature to unravel covid-19 prevention requirements hope to persuade lawmakers to revisit some changes when they reconvene in January.

Two prominent business groups say they are especially troubled by a provision empowering citizens to sue businesses they believe slighted them with vaccination requirements, which the bill largely bans for companies and government entities.

So far, Republican lawmakers who spearheaded the bill have given a cool reception to the call to revisit it by the Tennessee Chamber of Commerce and Industry and the state's National Federation of Independent Business chapter.

The dispute, while largely couched in delicate language, offers a rare glimpse at a public rift between groups that tend to be closely aligned. Republican leaders are usually eager to highlight their close ties to business and tout Tennessee as a low-tax, low-regulation haven for companies.

Those alliances were tested during the three-day special session, which ended after an hourslong standoff in October. Lawmakers met privately after manufacturers including Ford Motor Co. -- for whom lawmakers had just approved an economic development package for a massive electric vehicle and battery production project -- opposed the bill's change that would let most businesses implement mask requirements only in rare, dire public health scenarios.

In the dark of night, Republicans relented and carved private businesses out of stringent mask restrictions. Still, the bill was unsavory enough that the chamber and the business federation opposed its final form. Nine House Republicans voted no, two chose not to vote and others weren't around for the overnight finale.

Republican Gov. Bill Lee hasn't said whether he'll sign the measure, which lawmakers passed after calling themselves into session because he declined to do so. Leaders of the business groups said they have let the governor know their concerns but aren't lobbying for a veto. Tennessee lawmakers can easily override vetoes, and Lee hasn't vetoed anything in his tenure.

Both business groups have expressed concerns about Biden administration requirements for workers at larger employers to get a vaccine by Jan. 4 or face rigorous covid-19 testing, which a federal appeals court has paused amid legal challenges.

But the wide-spanning state bill would put Tennessee law in conflict with the federal policy, with businesses stuck in the middle facing the prospect of lawsuits.

Before the bill passed, the national business group's Tennessee director, Jim Brown, warned lawmakers their votes could affect their scorecards with the group. Brown told the AP that it was only one vote -- albeit, a big one -- and "a lot of good friends of ours in the Legislature felt they had to vote for this and they're still going to score high." However, the group also plans to consider sponsors of separate bills opposed by business when discussing endorsements and campaign contributions, Brown said.

Bradley Jackson, president of the Tennessee Chamber of Commerce and Industry, said it's in Tennesseans' best interest for lawmakers and business to get back on the same page.

"I would equate it to two really good friends that have gotten along on so many issues had a disagreement," Jackson told the AP. "Hurtful things have been said, but we know how each other feels on this issue and fundamentally agree on the future of Tennessee on economic prosperity and working together to achieve that."

Legislative leaders have defended their work. House Speaker Cameron Sexton "disagrees with the direction NFIB [National Federation of Independent Business] and Tennessee Chamber is requesting," spokesperson Doug Kufner said. He also said there is "much discussion" about whether there's a need to extend covid-19 liability protections for businesses past July 2022.

Senate Speaker Randy McNally's spokesperson, Adam Kleinheider, said McNally is open to hearing ideas to improve laws but is proud of the work done by lawmakers, adding that the two business groups "had ample opportunity to weigh in at any point in the process and chose to engage only in the later stages."

Republican Sen. Todd Gardenhire had similar criticism when he ridiculed the chamber of commerce as the "chamber of horrors" in a committee meeting.

Brown said his group is disappointed in the "outcome and the process," saying it wasn't transparent and was rushed.

Information for this article was contributed by Zeke Miller and Jonathan Mattise of The Associated Press; and by Sydney Trent of The Washington Post.