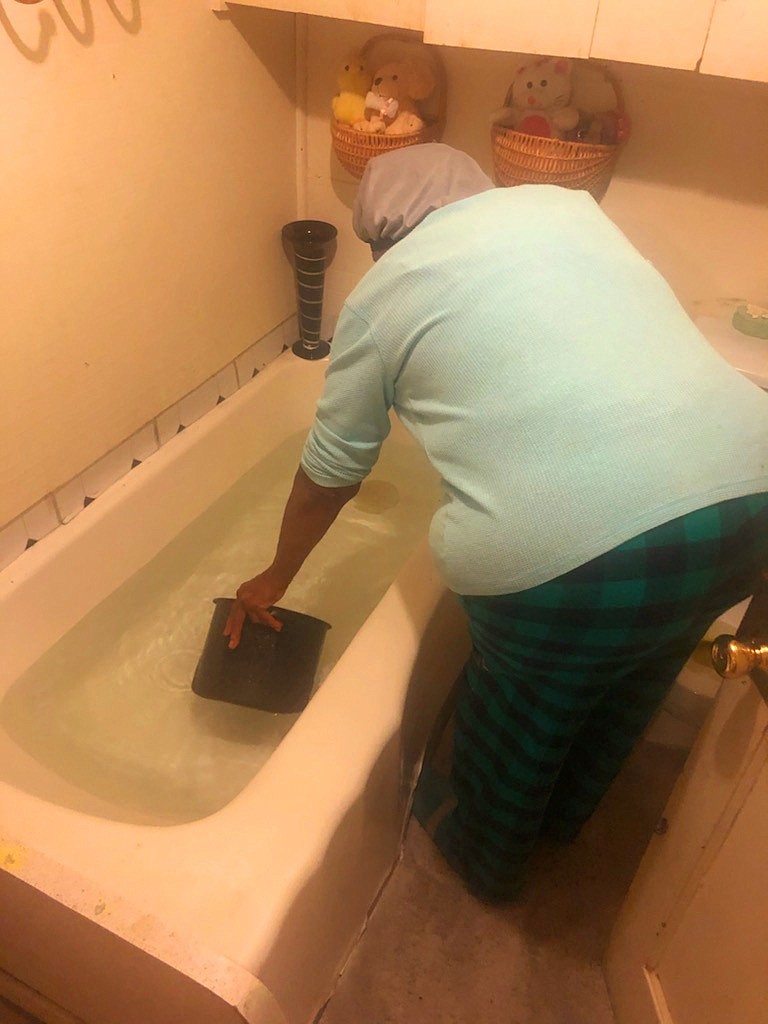 Gloria Harris, who does not have running water due to burst pipes from February's storm, scoops store-bought water she keeps filled in her tub into a cooking pot. (Special to the Commercial)

Gloria Harris was one of the many Pine Bluff residents who lost water during February's bitter winter weather. Nine months later, Harris still remains without running water because of corroded and burst pipes, and her daughter is pleading for help for her 72-year-old mother.

Charita Cason of Oklahoma and Harris' daughter said the pipes in mother's home -- a home she has lived in since 1984 --burst as a result of the storm, during which temperatures remained below freezing for several days and reached zero at one point. The water was turned off to prevent further damage and an extremely high water bill.

"The home is old, over 100-years old," said Cason. "Her house is sinking and her floors are weak."

Cason said she moved from Oklahoma to try to help her mother, who couldn't afford to get her pipes fixed for an estimated cost of $1,700.

In March, funds were allocated to people who qualified for assistance to have their plumbing repaired from the damage that occurred during the cold snap, which included more than a foot of snow.

Liberty Utilities gave $250,000 to the United Way of Southeast Arkansas, with the money earmarked for paying for repairs to residents' water lines that broke and burst from the cold weather. Liberty noted that it would limit what it pays on a single repair to $500.

Larry Matthews, Economic and Community Development director, said his office could step in and make up the difference if a repair was more than $500 and also if the person qualified for the U.S. Department of Housing and Urban Development money the department would use.

Liberty also designated $50,000 of the $250,000 donation to help customers with their water utility bills with the managed by Pine Bluff's Neighbor to Neighbor food pantry. That money was exhausted in just a few days.

"I reached out to Community Development and they said there was a waiting list and said they had already come and did my mom's floors in the bathroom from where it was leaking," said Cason, who added that the bathroom floors were still warped from the water damage. "That didn't fix the plumbing problem."

A representative from Economic and Community Development said they were not familiar with Harris' case but said they still had money allocated for those still in need.

The United Way was not involved in determining who did and didn't qualify for the money for repairs and instead acted as a clearinghouse for the repairs, paying plumbers after being presented with receipts. One of the key problems with the program was in finding plumbers willing to make the repairs.

Cason said she reached out to local plumbers who refused to make the repairs on her mother's house unless the total cost was paid upfront. Currently, Harris is purchasing water to fill up her bathtub.

"She may turn the water meter on just long enough to run some water when she runs out of the store-bought water," said Cason. "She uses that water for everything -- to cook and to clean."

Harris said she has not taken a bath in her tub and she doesn't want to leave her property to move somewhere else.

"The land means a lot to her," said Cason. "She struggled to get where she is now. When we moved there in 1984 we were the first Black people in that neighborhood because it was all white."

Residing in the 5200 block of West Bulloch Street, Cason said her mother and siblings endured many trials when they moved into their home because of their race. Due to the struggle to get there and the fight to stay there, Cason said her mom's blood, sweat and tears are the reasons her mother wants to stay.

"They would tell us to go back to our own neighborhood. It was really bad at first," she said. "She saved up her money and paid for that house in cash."

Cason said the water damage from the burst pipes made the old flooring more unstable, to the point that Cason doesn't walk past the living room when she visits her mother.

Because Harris doesn't want to leave her property, Cason sought other options and looked for financing opportunities for a trailer.

Harris said she even paid the fee to have the location zoned. Due to her mom's fixed Social Security income, Harris couldn't get approved for a loan.

"We went to Little Rock, Hot Springs, and right here in Pine Bluff," said Cason. "Everyone said no because she's on a fixed income."

Cason is afraid the city will condemn her mother's home even though she said that, because of the damage caused by the broken pipes, the house likely needs to be torn down.

"The home just went downhill from the storm, and I hate my mom is having to live like that because she doesn't want to leave," said Cason, who added that her mother has done so much for so many in her life. "It's just her. She raised six children, many grandchildren and even took in people not related to us. I really would like it if there is any kind of way to get her to live comfortably again."