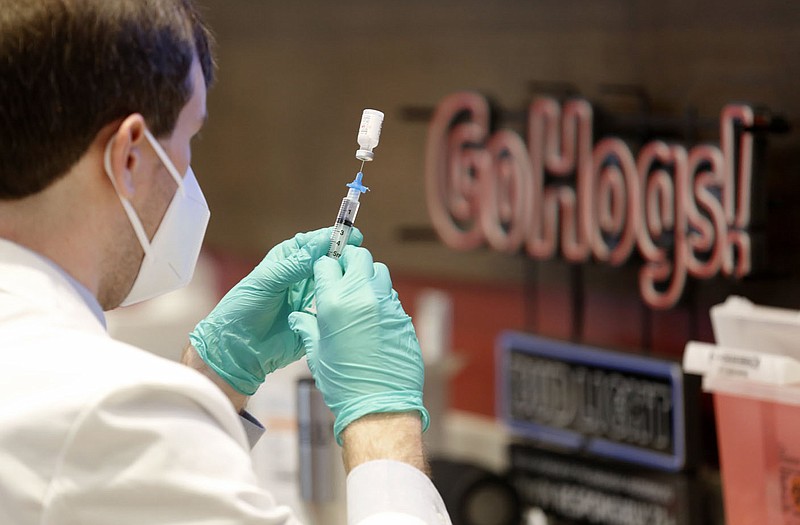 Matt Calhoun, a fourth year pharmacy student at the University of Arkansas for Medical Sciences Northwest College of Pharmacy, prepares a covid-19 vaccination shot Thursday, April 1, 2021, during an open covid-19 vaccination clinic hosted by the Northwest Arkansas Council in collaboration with the region's health care systems at Donald W. Reynolds Razorback Stadium on campus of the University of Arkansas in Fayetteville. Check out nwaonline.com/210403Daily/ and nwadg.com/photos for a photo gallery. (NWA Democrat-Gazette/David Gottschalk)

The number of new coronavirus cases, hospitalizations and active cases in Arkansas climbed higher Wednesday, while the daily death toll from the disease tumbled to single digits.

Another 675 new coronavirus cases were added — 61 more than the previous day, and 129 more than the same day last week, according to the Arkansas Department of Health. That raised the cumulative total since March 2020 to 517,675. Of those, 504,468 are considered recovered.

With new cases outpacing recoveries, the number of cases in the state that were considered active rose by 177 to 4,537 — 41 more than last week.

"New and active COVID cases have increased slightly from last week. This is worth noting," Gov. Asa Hutchinson said via Twitter on Wednesday afternoon. "Vaccine doses are above last Wednesday’s level, and this is important. Let’s encourage vaccinations before winter sets in."

The number of patients hospitalized with covid-19 jumped by eight to 296, while the number of virus patients who were on ventilators increased by three to 66.

The state’s death toll from the virus since March 2020, as tracked by the Health Department, rose by three to 8,525. It was the lowest daily total since the state reported two deaths on Oct. 18, and one of only 10 times in the past four months in which the state has reported five or fewer deaths in a single day.