On-the-job infection worries grow into efforts at worker organization by The Associated Press | November 10, 2021 at 2:11 a.m. 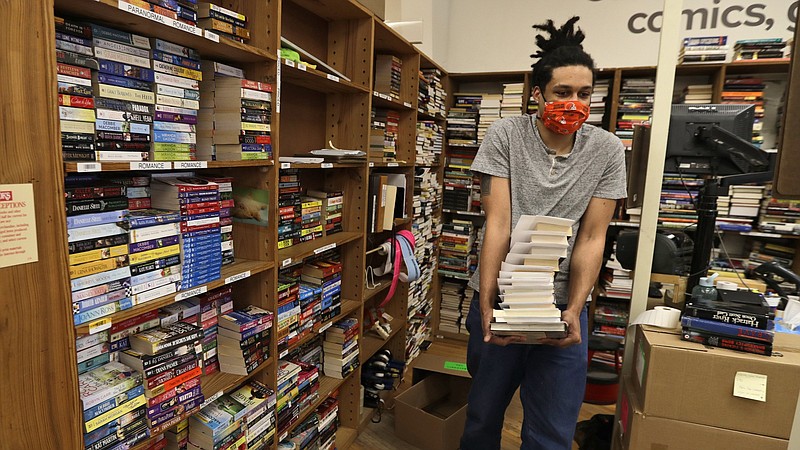 FILE - Dan Loftus carries books at Half Price Books in Mayfield Heights, Ohio on May 11, 2020. Half Price Books was co-founded in 1972 by Ken Gjemre, a former corporate employee who in middle age wanted to make a living more in line with his ideals as an environmentalist and anti-war protester. (AP Photo/Tony Dejak, File)

NEW YORK -- Britta Larson, a shift leader at Half Price Books in Roseville, Minn., has been with the store for nearly 12 years but only recently thought about whether she wanted to join a union.

"With the pandemic going on, we all were just weary of the constant dismissals we got when we raised concerns about staffing and workload to upper management," said Larson, noting that the staff had been reduced when the store shut down for a time and was "stretched extremely thin" once it opened again.

"Before the pandemic, I'd say we would have kind of just thought 'Things aren't great' because it was all we had ever known. The pandemic forced us to do some things differently and we learned from that."

Labor action has surged in many industries over the past two years, including in bookselling, a business where unions had been rare. Since 2020, employees have unionized or are attempting to do so everywhere from Printed Matter in New York City to Elliott Bay Book Company in Seattle and Bookshop Santa Cruz in California. In Minnesota, workers at four Half Price Books stores have announced plans to affiliate with locals of the United Food and Commercial Workers union.

"I think covid-19 was a rude awakening for bookstore workers, and really anyone who works with the public," says Owen Hill, a buyer at Moe's Books in Berkeley, Calif., which unionized earlier this year. "We were given no say regarding safe working conditions, even though we were risking our health by showing up for work. We had to organize in order to be a part of the conversation around worker safety."

The publishing world has not been a magnet for those seeking to get rich. Bookselling, especially independent bookselling, has a long affinity with liberal politics and a long sense of mission that transcends the desire to make a profit. Larson told The Associated Press that she and fellow Half Price staffers would rather unionize than quit because of their "enjoyment of books and love of our jobs as booksellers."

But when workers organize, even the most progressive-minded owners might object.

Moe's Books was co-founded in 1959 by the cigar-smoking Moe Moskowitz, a longtime activist and agitator known in part for letting his store serve as a refuge for anti-war protesters in the 1960s. Moe's is now run by his daughter, Doris Moskowitz, who has spoken of the store's egalitarian atmosphere and tradition of valuing dissent and social consciousness.

But when the staff announced in March that it was affiliating with the Industrial Workers of the World union, Moskowitz acknowledged mixed feelings, telling the digital news site Berkeleyside that the "decision to unionize, which I deeply respect from a political perspective, has left me very sad and confused." In September, workers picketed the store and alleged unfair labor practices (denied by Moskowitz), though Hill says the situation has since improved.

"After lots of ups and downs, and major disagreements, the parties have come together," Hill said. "We're zeroing in on a contract, and both sides are negotiating in good faith."

In a recent email to the AP, Moskowitz wrote: "Booksellers all over the country are participating in an important conversation. We are proud to be part of that, and we are especially proud of the progress made toward our first labor contract."

Some owners say they are at peace with unions despite tensions. When staff at the McNally Jackson stores in New York City organized in 2019, owner Sarah McNally acknowledged that the action was initially a shock that "offended" her "indie spirit." But she now says the union has brought clarity and structure to everything from salaries to job descriptions, and overall made management of the store more efficient.

At Green Apple Books in San Francisco, co-owner Pete Mulvihill had just joined the staff when workers joined the local United Food and Commercial Workers union around 30 years ago, and he remembers a "brutal" process that including picketing, layoffs and "an astounding amount of money spent on legal bills." He says tempers still rise when contracts are negotiated every three years, but he believes that staff and management are largely united as "like-minded book lovers."

"It's helpful to have clear, written policies on things like scheduling, health insurance and paid time off," he says. "It also sets realistic expectations for incoming staff around what the store can offer in compensation. And San Francisco is historically a labor town, so I think customers feel good knowing that our employees are backed by a union."