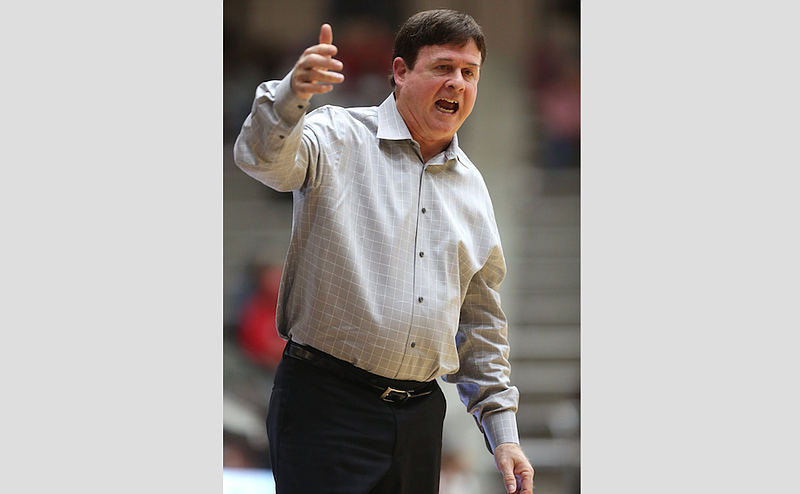 FILE — UALR head coach Joe Foley calls a play during the third quarter of the Trojans' 68-55 win at the Jack Stephens Center in Little Rock in this Feb. 2, 2019 file photo. (Arkansas Democrat-Gazette/THOMAS METTHE)

UALR women's Coach Joe Foley's emotions on the sideline never changed Tuesday night, even when his team took the lead late in the third quarter. He knew going into the game what kind of test his team was going to get.

While it took Missouri State more than 35 minutes to show it, the Bears gave a taste of why they've reached the Sweet 16 in back-to-back seasons.

Missouri State overpowered the University of Arkansas at Little Rock 76-62 at the Jack Stephens Center in Little Rock, running away after leading by only two points with seven minutes remaining.

The Bears got a game-high 24 points from Cleveland State transfer and two-time Horizon League Defensive Player of the Year Mariah White.

The Trojans had three players score double-digit points, led by Raziyah Potter's 16, but they were plagued by 22 turnovers.

"For an opening game, a non-experienced team against a very experienced team, I thought it was a heck of an effort," Foley said. "We played with a lot of intensity. ... We kept our heads up and kept battling ,and that's what I wanted to see out of this thing."

There were multiple points at which it seemed like the game might get away from UALR (0-1). The Trojans, after leading 9-8 at the first media timeout, allowed Missouri State (1-0) to surge ahead 23-15 by the end of the opening quarter.

UALR then pulled back within two points only to allow the Bears to stretch their advantage back out to nine and leading 38-32 at halftime. Missouri State led 46-36 early in the third quarter.

The Trojans crawled right back, even taking a 53-52 lead on a Sali Kourouma layup with 36 seconds remaining in the third.

But the Bears went back in front before the horn sounded and the reigning Missouri Valley Conference champs would never trail again.

"Just go out there and play hard," UALR's Krystan Vornes said of her team's mindset going into the fourth quarter. "We're a new team ... so right now, we're just asking everybody to play hard, figure out what we do best and then we can work on our weaknesses later."

Foley said he ended up getting about as good of a result as he could've asked for.

"I've always heard there's no such thing as moral victories. That's bull crap," Foley said. "When your kids play hard and play well, just because it's not on the scoreboard that doesn't mean we didn't make a lot of improvement."