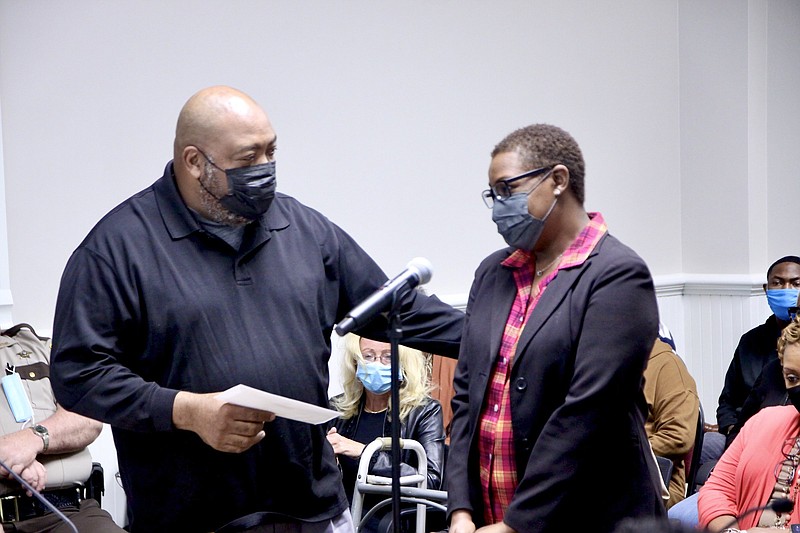 The Jefferson County Quorum Court approved a resolution supporting the establishment of an income tax credit for full-time law enforcement officers in the state.

Under Senate Bill 304, full-time law enforcement officers would be allowed a tax credit of up to $3,000 off their state income tax.

Starting pay for police officers in Arkansas is barely above that of a minimum-wage worker, according to the resolution, despite the fact that the state is among the nation's worst in its violent crime rate, and it is the fourth-most-dangerous state in the country.

SB304 did not become law during the spring's legislative session and was recommended for study by the Senate Interim Committee on Revenue and Tax.

The Quorum Court convened Tuesday for a special meeting before its regularly scheduled meeting at 5:30 p.m.

County Judge Gerald Robinson said there were some "time-sensitive" items that needed to be added to the agenda.

One item came from County Clerk Shawndra Taggart, who asked to fill a slot within her budget after the resignation of an employee who handled accounts payable. With the year ending, Taggart asked that the position be filled immediately so there are no delays in processing paperwork in her office.

As the special meeting concluded, the Quorum Court began the presentation of covid benefits to five families.

Justice of the Peace Reginald Adams presented a check to a family friend, saying that both he and the friend had been hurt by the death of a loved one due to covid-19.

"This is one of the ones that sometimes get personal to you," said Adams. "Marcie was married to my cousin, and as much as I am happy to present this, I am as well sad as she is and feel the pain that she feels."

Morris said her husband died in March and that he was the sole provider for the family.

"Almost five years ago, we took on the responsibility of raising three grandchildren," she said. "Now I'm left alone raising these children, and I'm going to do it. They're worth it to me."

All recipients said they were grateful for the monetary gift.

On another matter, an appropriation to eliminate a district court slot and pay a portion of that salary to the current employees every year after was approved by the Quorum Court.

District Judge Kim Bridgforth's request will allow $8,400 to be divided equally among seven employees, with the remaining balance of $19,160 eliminated from the yearly budget.

Also, a request from the Jefferson County sheriff's office for a 6% salary increase for the Juvenile Justice Educational Fund and the Tri-County Drug Task Force fund was approved. The two groups were not included in the recent ordinance enacting raises for county employees.

The 6% increase will be retroactive to September.

As the meeting concluded, Robinson announced that he was excited about the grand opening ceremony of the Sgt. Elga Lee Roberts Veterans Center and Memorial.