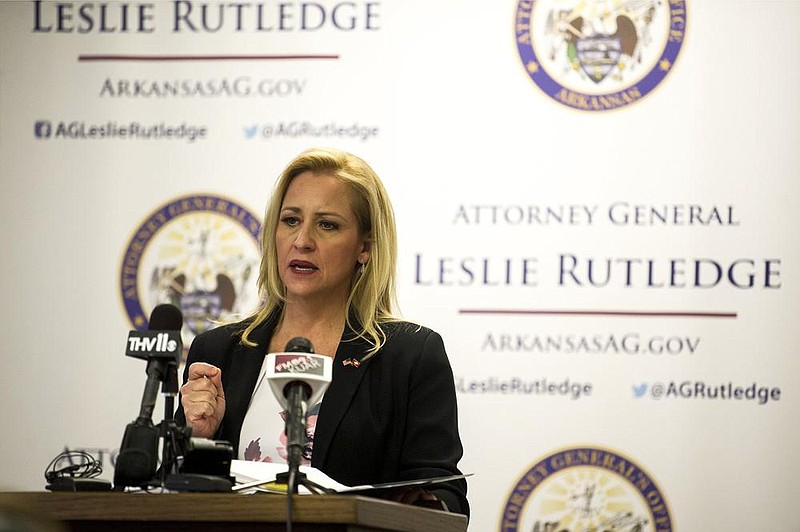 State Republicans late Tuesday began congratulating Sanders as the presumptive GOP nominee, though potential candidates still have three months to decide whether to enter the race.

Rutledge's entrance into the lieutenant governor's race further crowds the six-candidate Republican primary for the state's No. 2 job.

Rutledge on Tuesday did not give a reason for her withdrawal from the governor's race.

"Since announcing my candidacy for governor, I have been blessed by an outpouring of support from Arkansans in every community," Rutledge said in a news release. "At this crossroads in our country's history, now is a time for Christian conservative leaders to unite and fight together against those who wish to destroy the America we know and love."

"Sarah Sanders has been a friend for many years, and I know that as Governor she will stand strong against the onslaught of the liberal Left's attack on our home state," said Rutledge, who served a stint as an aide to Huckabee when he was governor.

In a statement, Sanders thanked Rutledge for her leadership.

"I look forward to uniting Arkansans behind my vision to grow our economy and create high-paying jobs, increase access to quality education, and deliver bold, conservative reforms that take our state to the top," she said.

At the end of the third quarter of this year, Sanders reported raising $11 million for her campaign, a record for a gubernatorial candidate, and spending $4.2 million. That left the campaign with more than $7 million cash on hand, according to a recent news release.

Gov. Asa Hutchinson of Rogers has served as governor since 2015 and is barred from seeking reelection under the state's term limits. Republican Lt. Gov. Tim Griffin of Little Rock also has been in office since 2015.

The filing period for state candidates begins Feb. 22, and the primary election is May 24. The general election is Nov. 8 next year.

Jones was the top fundraiser among the Democrats, raising more than $1 million for his campaign, according to campaign finance reports.

Jones' campaign manager Rhonna-Rose Akama-Makia said in a statement that "voters now have a clear choice."

"We would love a healthy exchange of ideas but Sarah Sanders had made it clear that she is more focused on division and doing what's best for the connected few and her national reputation, and that's the truth," she said. "We have pressing challenges here in our state and being Governor is a job that has an immediate direct impact on people's lives. Arkansans need someone they can trust in office."

Rutledge of Maumelle has served as the state's attorney general since 2015. She was first elected in 2014 and reelected in 2018.

She is the second announced Republican gubernatorial candidate to change races since Sanders announced her bid for governor in January by vowing to defend Arkansas from what she called the "radical left now in control of Washington" and to promote law and order, cut state income taxes, and champion good schools and teachers.

On Feb. 8, Griffin announced that he was leaving the governor's race to run for attorney general.

"While I believe Arkansans are ready for my message of bold, conservative leadership, my conversations with friends and supporters have persuaded me that at this time, I can do more for Arkansas in a different capacity," Griffin said in a written statement at that time.

A year ago as a then-gubernatorial candidate, Griffin said he wanted to phase out the state's individual income tax, though it could take 10 years or possibly more.

In July of this year, Rutledge announced plans to try to get a proposed constitutional amendment to eliminate the state's individual income tax on the 2022 general election ballot, hoping to eliminate the tax within eight years. She hasn't yet filed a proposed ballot title or popular name for the proposed constitutional amendment nor created a ballot question committee to promote the proposal.

In mid-September, Sanders said: "As governor, I will begin to phase out the state income tax to reward work, grow our economy, and create high paying jobs."

"This is a process that will take time, and it must be done responsibly," she said.

Rutledge is the seventh candidate to join the race for the state's number-two job and the sixth Republican.

The lieutenant governor's position is considered part time, and the annual salary is $46,704.

The official duties of the office, as described by the Arkansas Constitution, include presiding over the Senate with a tie-breaking vote; and serving as governor if the governor is impeached, removed from office, dies or is otherwise unable to discharge the office's duties. The position of lieutenant governor was created in 1914, but Arkansas did not have one until 1926.

As lieutenant governor, Rutledge said she would work alongside Sanders to "make transformational changes to protect our rights and ensure top notch educational opportunities, lower taxes, and job creation."

"As Lt. Governor, I will stay on the frontlines fighting for Arkansans' constitutional rights and protecting our conservative values," Rutledge said in her news release, noting that she has taken over 60 legal actions against President Joe Biden's administration, including challenging the federal vaccination mandate.

Before Griffin's Feb. 8 announcement that he was running for attorney general, Rutledge said she didn't plan to leave the governor's race to run for lieutenant governor.

"There is absolutely no truth in that whatsoever," she said when asked about speculation in some political circles that she'd switch races.

"After working a full-time job with a staff of 180 people, I'd be bored with a part-time job and a staff of two," Rutledge said.

"It's probably wishful thinking by one of my opponents," she added.

Kelly Krout, a foster care advocate from Lowell, is seeking the Democratic nomination.

Rapert said the state needs its next lieutenant governor to be a "strong right arm for our next Governor, Sarah Huckabee Sanders."

"That cannot happen with a candidate who has continually attacked our likely nominee by questioning her leadership and ability at every turn," he said in a written statement.

Webb in a statement congratulated Sanders, who he called "Arkansas' next Governor."

"Let the fact remain, I am the only candidate seeking the actual office of Lieutenant Governor," Webb said. "I am not using that office to run for another office eight years from now, and am not jumping out of this race.

"As someone who has offered the Attorney General much advice and friendship, I am severely disappointed with her decision to switch to this race; an office she does not respect," said Webb, who served as chief of staff to the late Lt. Gov. Win Rockefeller and a redistricting aide to Rutledge.

Bequette said Rutledge wouldn't fight for Arkansans because she "raised the flag of surrender" in the governor's race.

"I picked the Lieutenant Governor's race because I can do the most good, I will not surrender and I will not betray Arkansans," he said in a written statement.

Bledsoe said in a written statement that he was 100% committed to the race.

"Our team is excited about where we are at this point, and we firmly believe the people of Arkansas are tired of career politicians. We look forward to seeing the other candidates on the campaign trail," he said.

Wood could not be reached for comment by telephone Tuesday evening.