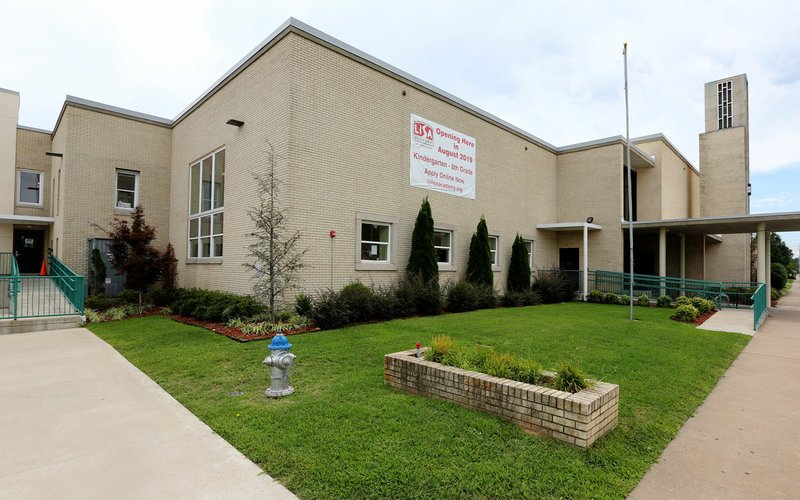 NWA Democrat-Gazette/DAVID GOTTSCHALK Lisa Academy Springdale is visible Friday, August 16, 2019, at 301 Holcomb Street in Springdale. The academy is now in the location of the former Ozark Montessori Academy.

The Arkansas Board of Education on Wednesday gave final approval to plans by LISA Academy Public Charter Schools to offer kindergarten through 12th grades in Fayetteville.

The newly approved amendment to the LISA Academy's state-issued charter calls for the construction of two buildings to house three schools at South McGuire and West Van Ashe streets in north Fayetteville. The kindergarten through fifth grades are to open in the 2023-24 school year to be followed by a middle school in 2024-2025 and a high school in 2026-27.

The Education Board ratified the charter school plans at a meeting in which -- for the first time -- it reinstated a teacher license to an individual who had permanently surrendered his license in 2011 in the midst of a state investigation of allegations that he had violated the state's educator code of ethics.

Education Board members noted that LISA's Fayetteville campus will be in a location some distance from residential neighborhoods.

Hasan Sazci, an assistant superintendent and principal of LISA Academy's Springdale campus, told the board that a traffic study showed that the school is within a 20-minute drive of multiple residential communities and that the system will provide school bus transportation if there is a demand for it.

Luanne Baroni, another assistant superintendent and director of communications for the system, told the board that the advantage of the location is that it is accessible to families in Fayetteville and in Springdale. LISA Academy has a kindergarten-through-eighth grade school in Springdale and families there want access to a LISA high school, she said.

The state Education Board followed up by accepting the panel's recommendation to add three schools to the charter and to raise the system's maximum enrollment cap by 1,168 students to a total of 6,800 students to be served in both Central and Northwest Arkansas.

The Education Board has the authority to either accept the charter panel's recommendation on a charter plan or conduct its own review of the proposal before making a final decision.

The LISA Academy system, headquartered in Little Rock, is the largest charter system in the state in terms of numbers of campuses.

The system currently operates seven schools in Little Rock, North Little Rock and Springdale plus the Arkansas LISA Hybrid School. It is in the process of building three additional schools for kindergarten through 12th grades in Rogers to serve the Rogers and Bentonville areas. The Rogers campus will begin opening to elementary pupils in August 2022.

KLS II Leasing is building LISA Academy's Rogers campus on Horsebarn Road and will also build the Fayetteville campus. KLS will own the buildings and lease them to the LISA Academy system.

KLS, an affiliate of the Walton Family Foundation, will charge the system 12% of the state funding that the campuses generate.

The state Education Board routinely puts on probation, suspends, revokes or takes other actions on teacher licenses.

The conditional reinstatement of Christopher Parker's permanently revoked license by the Education Board on Wednesday was a first for the board and only recently made possible by Arkansas Code Annotated 6-17-40.

The reinstatement of his license to teach English/language arts as well as drama and speech are conditioned on his acquisition of 36 hours of professional training. Once hired by a district, he will be on probation for three years and must work with a mentor teacher for that time.

The statute allows the reinstatement after the passage of 5 or 10 years and the meeting of other qualifications.

Parker told the board that he surrendered his license in 2011 rather than go through a state investigation of allegations that he violated the state's teacher code of ethics while working in the Lake Hamilton School District.

Parker, who has since acquired teacher licensure in South Dakota and applied for reinstatement of his Arkansas credentials, admitted to not adequately supervising his classes of students, failing to report inappropriate student behavior to his supervisors and promoting a philosophy on creativity that was interpreted as indoctrination.

He told the Education Board that he had incorrectly focused his attention on the school's large theatrical production to the detriment of his other teaching responsibilities.