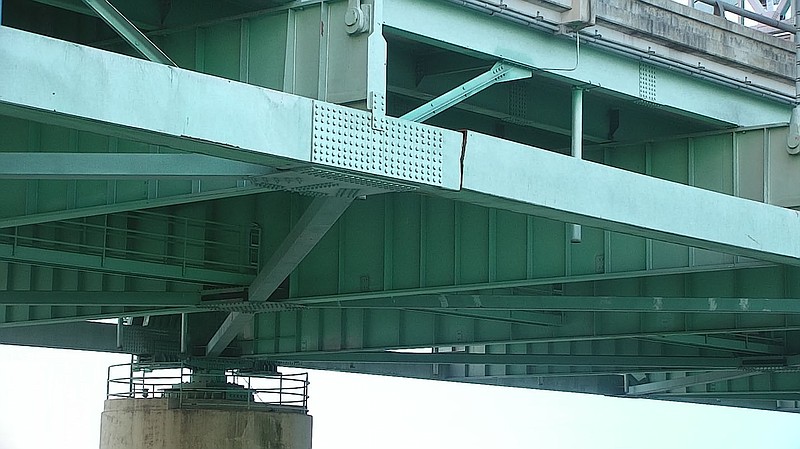 Cracked beam on the I-40 Mississippi River bridge between West Memphis and Memphis. (Special to the Arkansas Democrat-Gazette)

The fracture in the tie girder that shut down the Interstate 40 bridge over the Mississippi River for three months this summer likely developed in a weld repair made during the fabrication of the bridge piece before the bridge was built, according to a forensic analysis of the fracture.

"In all likelihood the cracking in the weld occurred within hours of its completion but was not detected by any post-weld repair fabrication testing and remained unchanged for a number of years," said the report by Wiss, Janney, Elstner Associates -- a global engineering, architecture and material science consulting firm based in Northbrook, Ill.

The 47-page report also said that based on its analysis, such a fracture likely won't be replicated on the crossing connecting West Memphis and Memphis. The bridge is known as the Hernando DeSoto Bridge.

"Given the 48-year service life of this structure, the fact that the subject fracture occurred in three separate phases over several years, the recent inspection efforts to identify welding defects at the tie girder thickness transition welds and no evidence of observed fatigue crack growth during this study, it is highly unlikely that an additional major fracture of a similar tie girder thickness transition weld will occur," the report concluded.

Still, it called it prudent to conduct "arms-length" inspections of the bridge, as well as periodic inspections using ultrasonic testing, which can detect anomalies that cannot be seen by the naked eye.

The precise location of the partial fracture was in "the tie girder just west of T22 at the welded splice in the north tie of Span B (NB222W)." More specifically, it occurred in a welded splice between two plates in the tie girder.

[DOCUMENT: See the issues, amendments in the infrastructure bill » arkansasonline.com/1111fracture/]

A Michael Baker International inspector who was inspecting another part of the bridge discovered the partial fracture by chance on May 11 and quickly had the bridge closed to traffic.

The bridge is an old design lacking redundancies common in more modern bridges. Lacking the redundancies, the bridge was in danger of collapsing into the river if the tie girder fractured completely.

The fracture developed over several years from a defect "in the area of the weld where two weld repairs had been performed during fabrication," according to a separate Arkansas Department of Transportation report.

"The weld repairs were more susceptible to cracking because of the type of steel and the welding method used in the fabrication of this bridge in the 1970s," it said. "In all likelihood the cracking in the weld occurred within hours of its completion but was not detected by any post-weld repair fabrication testing and remained unchanged for a number of years."

Even an ultrasonic testing inspection performed in 1982 failed to detect the defects at the fracture location.

The partial fracture went through three distinct phases over the life of the bridge before its discovery in May, according to the department report.

The initial fracture took place on the interior face of the box, which isn't visible by conventional inspections.

"The second phase of crack propagation fractured through the remaining thickness and was later identified in the 2019 drone video," the report said. "The third fracture event propagated up the remaining web, across the top flange, and arrested in the flange to web weld of the tie girder."

Further, the report said it's "likely the existing weld cracks became unstable as a result of a unique combination of low temperatures, increasing tie girder stress, and the effects of live loads to which the bridge had not been previously subjected."