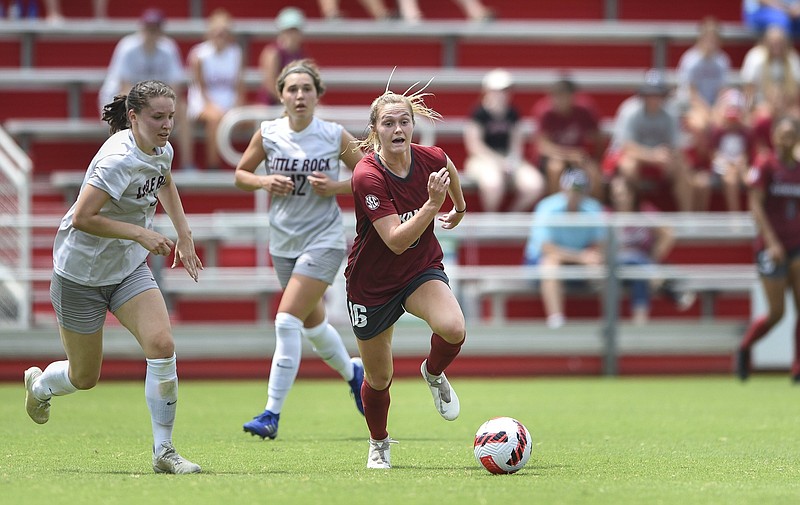 FAYETTEVILLE -- University of Arkansas women's soccer Coach Colby Hale admitted the opportunity to make a run in the NCAA Tournament is likely why several of his player elected to return this season.

The No. 7 Razorbacks (16-4) claimed their third consecutive SEC regular-season title, but fell short for the sixth straight year in the conference tournament final. They also put together a school-record 14-game winning streak during the regular season.

But now an Arkansas team, which includes a host of veterans, will get the chance to leave another lasting mark on a program.

The Razorbacks, a No. 2 seed, host Northwestern (La.) State to open the at 6:30 p.m. today at Razorback Field.

Thanks to their high seed, Arkansas now has the opportunity to host the first three rounds. It was a No. 2 seed last year, too, but didn't get the benefit of hosting as all games were played at neutral sites because of the pandemic. That's a difference-maker for the Razorbacks, Hale said.

Arkansas is 29-3-2 in Fayetteville since 2018. The Razorbacks lost in the Sweet 16 to eventual national champion Santa Clara. It was the second Sweet 16 appearance in school history.

But he's also not looking past anyone.

"Everyone in the NCAA Tournament's there for a reason," Hale said. "We've told our players, we're only gonna focus on one game at a time. It's a good team and won their league for a reason."

The Lady Demons (12-5-2) won both the Southland Conference regular-season and tournament titles. They are making their fourth NCAA Tournament appearance, but first since 2005.

The teams have never played and the only common opponent this year is Arkansas-Little Rock. Arkansas blanked the Trojans 5-0 in a scrimmage, while Northwestern State lost 1-0 to UALR in an exhibition game.

Hale was also pleased with a talented, deep recruiting class of 14 that was signed on Wednesday.

That group included Sydney Handel, a defender from Lee's Summit, Mo., who had opportunities to play other sports in college, along with midfielder Ainsley Erzen of Carlisle, Iowa, who is a national 800-meter champion and will also run track for Arkansas.

"Sydney Handel is a three-sport athlete we picked up pretty late," Hale said. "I think she had like 12 Division I volleyball offers and had some basketball offers as well. She's pretty interesting. She was a goalkeeper for a while and now she plays center back. It's a good class."

Midfielder Makenzie Malham was the Gatorade Player of the Year in Oklahoma and will follow in the footsteps of her sister, Taylor. Taylor Malham recently earned her second All-SEC first-team selection.

The Razorbacks head into the NCAA Tournament getting healthier.

Ava Tankersley played some in the Sunday's loss in the SEC Tournament final. She missed three games after being injured in the first half of the Arkansas' regular-season home finale against Mississippi State. The sophomore forward has four goals and six assists in 17 games this season, including nine starts.

"She didn't play a ton, but she's getting better," Hale said.