Gas-supply-cuts warning adds fuel to crisis with Europeans by Compiled by Democrat-Gazette Staff From Wire Reports | November 12, 2021 at 4:11 a.m. 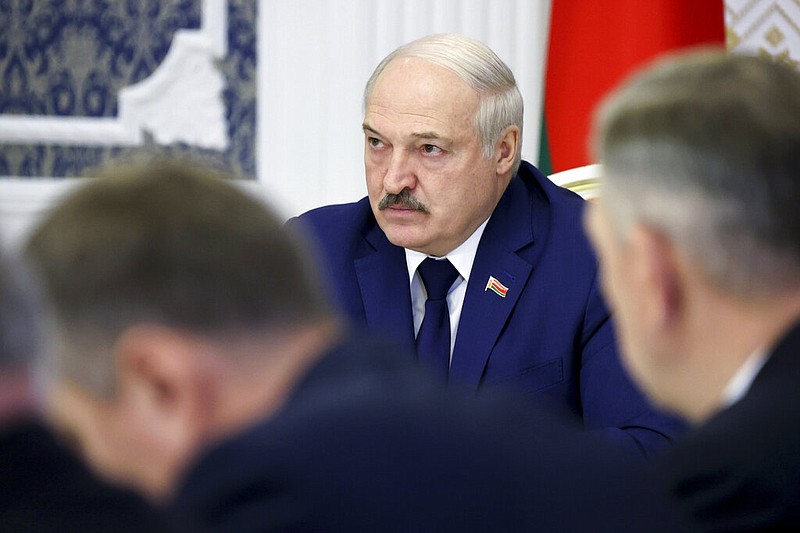 Belarusian President Alexander Lukashenko speaks during a Cabinet meeting in Minsk, Belarus, on Thursday, Nov. 11, 2021. Lukashenko on Thursday called the Russian bomber flights a necessary response to the tensions on the Belarus-Poland border. (Nikolay Petrov/BelTA Pool Photo via AP)

MOSCOW -- Belarusian President Alexander Lukashenko opened another potential front against Europe on Thursday, threatening to choke off gas supplies amid a deepening crisis that has migrants surging to European Union borders and Western leaders planning to retaliate with more sanctions.

Lukashenko's warning jolted energy markets and further suggested his authoritarian regime still had the backing of its key ally Russia, whose natural gas pipelines -- including one crossing Belarus -- are critical for European supplies.

It is also Russian President Vladimir Putin who would decide whether Lukashenko could follow through with threats to turn off the Belarus pipeline, which supplies about 20% of Europe's Russian gas, according to analysts. So far, Russia has insisted it has no part in Lukashenko's growing feud even as it declines to rein him in.

"It's clearly a very serious threat and the next step is to watch what Russia says or does about this," said Nigel Gould-Davies, a Belarus analyst at the International Institute for Strategic Studies and a former British ambassador to Belarus.

[Video not showing up above? Click here to watch » arkansasonline.com/1112hrodna/]

In another display of Moscow's support, two Russian strategic bombers flew near Belarus's border with the European Union for the second day Thursday.

Lukashenko -- often called Europe's last dictator by his foes -- has steadily escalated his fight with the EU and its allies since elections last year that handed him victory but were widely viewed by Western leaders and others as riddled with fraud.

His threat over gas supplies comes as EU officials plan new sanctions as early as next week, with other possible measures to follow by the United States, European Commission President Ursula von der Leyen said Wednesday after talks in Washington with President Joe Biden.

German Chancellor Angela Merkel called Putin for the second time in two days to press him to use his sway over Lukashenko to end the standoff, but Putin shrugged off any role. Putin said the EU should restore contacts with Belarus to resolve the problem, according to the Kremlin press service.

Kremlin spokesman Dmitry Peskov said Thursday that Russia wanted to see the migrant crisis resolved "just like any other country."

Yet Putin remains a political lifeline for Lukashenko, who has been in power since 1994 and still appears emboldened by Kremlin support. In the Belarus capital, Minsk, Lukashenko told Belarusian Prime Minister Roman Golovchenko that if the EU imposes new sanctions, "you must not forgive them anything."

In a sign of worries about a potential supply squeeze from Belarus, the price of future contracts at a benchmark exchange in the Netherlands was up more than 3% at one point Thursday before falling back.

[Video not showing up above? Click here to watch » arkansasonline.com/1112belarus/]

Europe relies on Russia for about 35% of its natural gas through pipelines such as Nord Stream 1 via the Baltic Sea, TurkStream and Blue Stream via Turkey, and the Yamal-Europe pipeline via Belarus and Poland to Germany.

But Russian gas flows via the Yamal-Europe gas via Belarus pipelines were halved Thursday from the previous day, Reuters reported.

A controversial new pipeline, Nord Stream 2, opposed by Ukraine and criticized by the United States, is undergoing a regulatory approval process in Germany, with Russia pressing Europe to speed up the process.

Russia sent two nuclear-capable strategic bombers on a training mission over Belarus for a second straight day on Thursday in a strong show of Moscow's support for its ally amid a dispute over migration at the Polish border.

The Belarusian Defense Ministry reported two Russian Tu-160 strategic bombers practiced bombing runs at the Ruzany firing range, located in Belarus about just over 37 miles east of the border with Poland. As part of the joint training, Belarusian fighter jets simulated an intercept, the ministry said.

The missions marked the second time in two days that Russia sent its nuclear-capable bombers into the skies over Belarus. The Belarusian Defense Ministry said that such Russian bomber flights will be conducted on a regular basis.

The Russian military said the bombers spent over 4½ hours in the air during the mission intended to buttress the countries' alliance. It noted that the bomber patrol "wasn't aimed against any third countries."

Belarus denies the allegations but has said it will no longer stop refugees and migrants from trying to enter the EU.

Russia and Belarus have a union agreement envisaging close political and military ties. Lukashenko has stressed the need to boost military cooperation in the face of what he has described as aggressive actions by NATO allies.

Information for this article was contributed by Robyn Dixon and Perry Stein of The Washington Post and by Vladimir Isachenkov of The Associated Press.