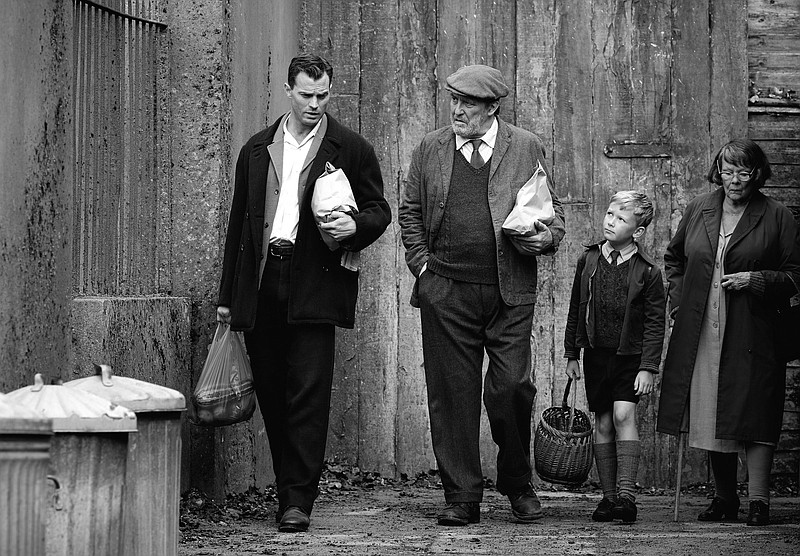 Rating: PG-13, for language and some violence

Rating: PG-13, for language and some violence

I walked to the screening for "Belfast," the Kenneth Branagh-helmed semi-memoir of growing up in tumultuous late-'60s Ireland in what felt like appropriately drab weather: 4 degrees, wet with the kind of cold, heavy dampness that takes its time to leach out of you when you're finally able to get indoors.

But Branagh's film, at least at first blush, wasn't particularly accommodating toward my dreary ends. After a full-color coda of pleasing, brightly lit imagery from the titular northern city, the film begins proper in black and white, in mid-August 1969. On a busy neighborhood street, there's a cacophony of noise, from kids playing in the street to neighbors chatting back and forth. When, at last, the camera settles in on the glowing visage of a young lad named Buddy (Jude Hill), he's holding a fake sword and garbage can-lid shield, to ward off the entreaties of Moira (Lara McDonnell), one of his innumerable cousins. Called in for his afternoon tea by his loving Ma (Caitriona Balfe), he's seconds away from the door, when a sudden burst of violence down the street catches his eye and stops him fast.

An angry group of Protestant rioters, bent on ridding the neighborhood of any remaining Catholic families, come streaming down Buddy's street, throwing Molotov cocktails and smashing the windows of those they suspect as such, leaving the boy trapped in a sea of churning bodies and tumultuous fury. When Ma comes to rescue him out of the mass of chaos and rushes him back to the relative safety of their row house, along with his older brother, Will (Lewis McAskie), it's clear a new, most unwelcome epoch has suddenly arrived.

Branagh's film moves from this flashpoint through the next few months, as continued violence and Protestant uprisings threaten the stability of the neighborhood -- and the city -- around the family. When Pa (Jamie Dornan) returns from his job, doing bi-weekly stints in England as a joiner, he's quickly wrapped up in the roiling politics of the now divided community, approached by fellow Protestant Billy Clanton (Colin Morgan), a power-driven thug, to join up with "his side" against his neighbors. Steering clear as best he can from the danger all around him, Pa gets a permanent job offer in England, and tries to convince his wife to leave Ireland, a move she desperately doesn't want to make.

Buddy, for his part, is mostly protected from a lot of the complicated and confusing drama around him (at one point, he has a conversation with one of his myriad cousins about how to tell if someone is Protestant or Catholic in all this furor: If they're named "Paddy," they're the latter, they determine, but anyone named "Billy" or "William" is definitely the former ("Thomas" could seem to swing either way). Instead, he focuses his attention on a long-haired girl named Catherine (Olive Tennant), a schoolmate with whom he has a substantial crush, receiving romantic advice from his beloved grandfather, Pop (Ciaran Hinds), who lovingly dotes on Buddy's grandmother, Granny (Judi Dench) in similar fashion.

The idea of leaving Belfast, and his grandparents, and all their cousins and other family members and friends, fills Buddy with similar dread as his Ma, but when the situation in the city continues to deteriorate, it becomes clear soon enough the family must decide to either exit their beloved city or stay and endure the hardships together.

The obvious comparison here is to Alfonso Cuaron's brilliant "Roma," also a black and white-shot memoir of a similar timeframe that has to do with a sort of political coming-of-age amidst the strife of a stricken city. But whereas Cuaron's film felt singular in its detail and storytelling, Branagh, who also wrote the script, too often settles for something a good deal more pat. It's an uneven effort. At times, he shows considerable restraint -- a scene between Buddy and his Pop, as the older man oils a saddle while opining about the nature of love as Granny listens in from the window, feels engagingly light -- and at other times, he makes things almost cartoonishly blatant -- a discomfiting close up of a spewing priest (Turlough Convery) at the family's local church, sweating profusely, spittle at his lips, exhorting his flock to turn away from wickedness, feels like something else altogether -- which gives the film an uneven, rutted quality.

There's also a certain rote element to Branagh's vision. He has a way of telegraphing many of the film's emotional beats -- one character with health problems becomes instantly recognizable as a totem for things going wrong; Buddy draws a literal forking road to display what the priest was warning them about -- that hits less hard than Cuaron's much more subjectively particular narrative. The nearly constant drawl of Van Morrison songs in the background soundtrack -- because, of course -- also suggests the filmmakers are making the most obvious choice instead of a potentially more moving one (see also the film's reference to "High Noon," with respect to Pa's choice to do the right thing in the face of community backlash).

The film shares a certain DNA with "Hope and Glory," John Boorman's 1987 film about a young boy's experience of the London Blitzkrieg, only there too, Boorman made the film almost solely through his young protagonist's perspective, limiting their ability to understand what was truly going on around them. Branagh keeps Buddy's arc as the central journey, but includes the comings and goings of other family members and conflicts in a way that saps it of resonance. We more or less understand the conflicts all too perfectly well, without the more engaging benefit of a distinct perspective.

For all its technical beauty, there can also be a meandering quality to the visuals -- Branagh gets cute with his use of color, reserving it for times the family attends live theater -- and, in but one example, a peculiar, low-angled upshot of the family as they attend a funeral together seems blatantly off-tone for the scene's intended emotional heft.

As such, it feels somewhat halfway between a distinct memoir and a Hollywooded treatment of the tumultuous time period, glossing over complexities in favor of emotional through-lines and cutesy blasts of whimsy ("There is no road to Shangri-La from Belfast," Granny laments). The kind of film that seems to beg the Academy members watching it to be taken seriously, but not so much as to bring a pall to their day.

There's nothing wrong with presenting a difficult era from a myriad of perspectives (what makes Boorman's film so delightful, by contrast), but too often Branagh hedges his emotional bets in ways that feel inorganic instead of endearing. Given the subject matter, I anticipated something as bleak and raw as a mid-November day in Bialystock; what we get instead feels closer to mid-April in Montpelier, Vt. 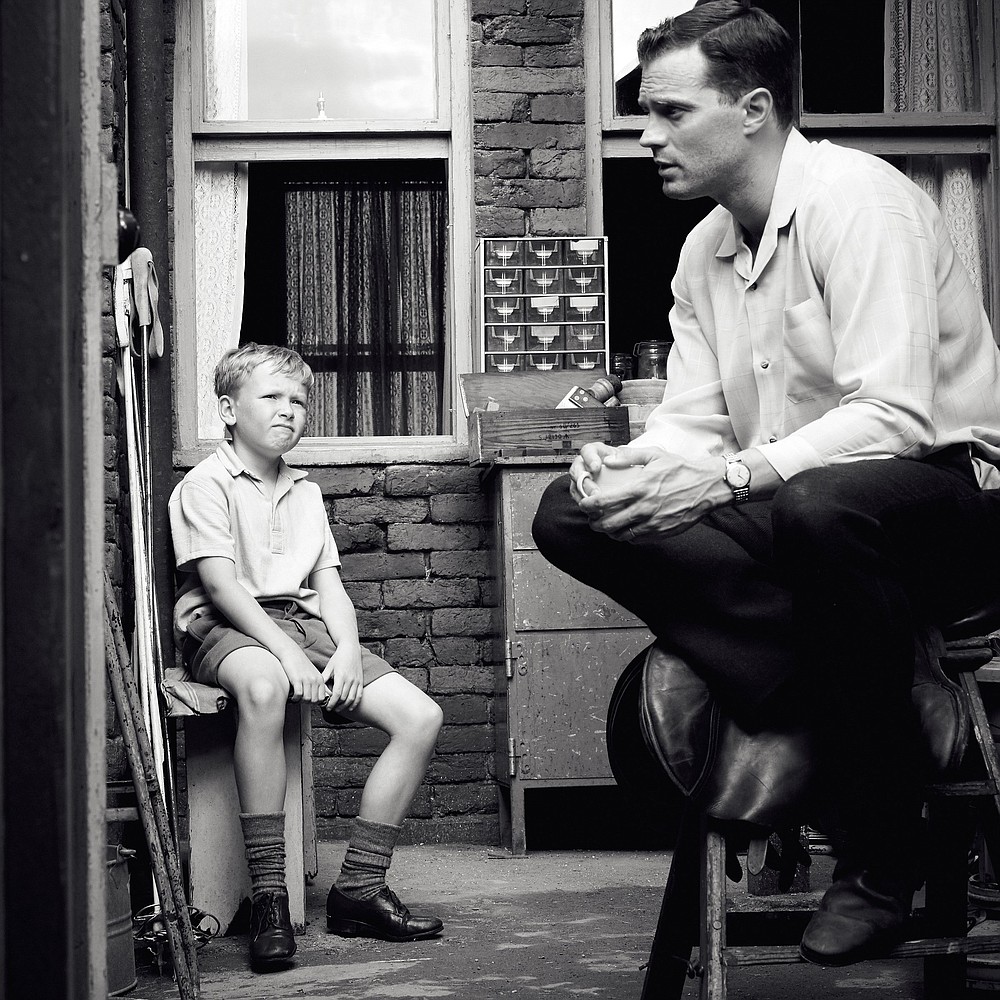 Buddy (Jude Hill) and his father, Pa (Jamie Dornan) perform in Kenneth Branagh’s “Belfast,” a semi-autobiographic film about a working class family and their young son’s childhood during The Troubles in Northern Ireland.
ADVERTISEMENT