Energy-price surge gives hint of easing, but no drop on horizon 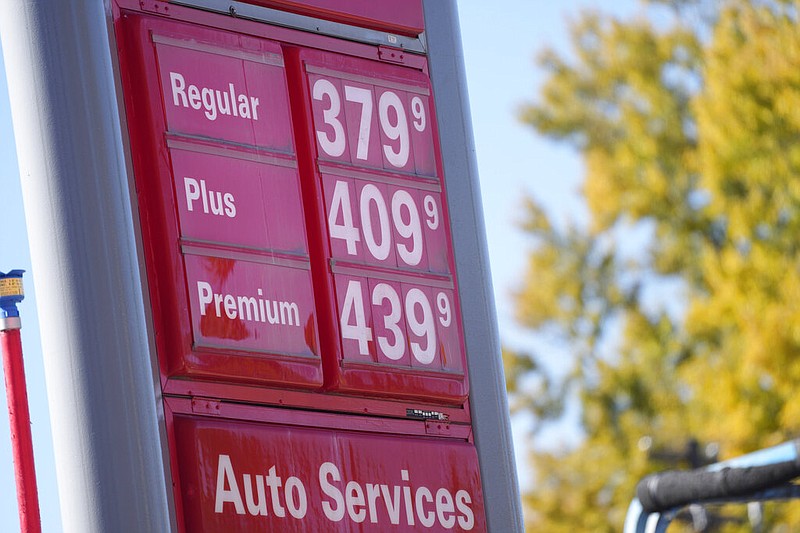 The prices for grades of gasoline are shown on a sign outside a Conoco station in Denver on Friday, Nov. 5, 2021. (AP/David Zalubowski)

A main driver of the wave of inflation besetting the country is the price of energy -- all forms of energy.

Gasoline, diesel fuel, heating oil, natural gas, electricity and coal all cost more -- in some cases much more -- than they did a year ago, or even a month ago. The national average for gasoline is $3.40 a gallon, up by more than a dollar from last November and the priciest it has been in seven years.

The explanation is not complicated. Demand for energy -- from motorists, truckers, airlines, shipping lines, manufacturers -- rebounded from the pandemic slump much more quickly than production has been able to recover.

The good news for consumers is that the worst of the surge may already have happened. The bad news is that any factors that could exert serious downward pressure on prices are nowhere in sight. And the winter heating season is just getting started. Higher natural gas prices will mean bigger heating bills for CenterPoint Energy customers in Arkansas. The utility said last week that average winter month bills will rise about 42% compared with last year. CenterPoint serves about 400,000 Arkansas residential and business customers.

The increased cost of energy spreads throughout the economy, so anything that has to be manufactured or shipped becomes more expensive.

From one perspective, the high prices are a sign that the economy is getting back into full gear.

"[President Joe] Biden's infrastructure bill is a strong oil-demand signal for the future and the lifting of U.S. travel restrictions is also supporting oil prices," Louise Dickson, an analyst with the Norwegian firm Rystad Energy, said in a note.

The $1.2 trillion infrastructure bill awaiting Biden's signature would not only pour a lot of money into the economy but a large part of it is directed at energy infrastructure, which in the long run could help bring prices down.

But many researchers, including a forecasting firm that Biden often cites to support the economic benefits of his proposals, say the bill is structured in a way that could add to inflation next year, before prices have had time to cool off.

Some economists and lawmakers worry about the timing, arguing that the risk of fueling more inflation when it has reached record highs outweighs the potential benefits of passing a big spending bill that could help to keep prices in check while addressing other social goals. Prices have picked up by 6.2% over the past year, the fastest pace in 31 years and far above the Federal Reserve's inflation target.

In the meantime, the inflation pinch will hurt Americans in varying ways. If this winter's weather conforms to seasonal averages, the Energy Information Administration predicted last month, home heating oil bills will be up 39% over last year. Natural gas bills should be 26% higher than a year ago, and electricity 6%. But the pain will vary from region to region, with the increase in natural gas prices highest in the Midwest, and that of electricity highest in the Northeast.

And a cold winter would push those bills considerably higher.

Biden has called on the OPEC oil-producing nations and Russia to step up production in the face of the global price rise. China, the world's largest oil importer, has, too. But Moscow and the Organization of Petroleum Exporting Countries have recommitted to the course they plotted this summer to permit only gradual increases in supply. At the same time, production in Nigeria and Angola has fallen below targeted levels.

Analysts nevertheless point to signs that acute upward pressure on prices may be fading.

In the United States, natural gas production this week is up more than 3% from October and, even as stockpiles start to build, forecasters predict relatively mild weather for much of the country in December. Futures prices for natural gas declined on Wednesday but rose Thursday to break a four-day skid.

Oil refineries on the Gulf Coast have restarted after being shut down in August by Hurricane Ida. That recovery was "earlier than expected," Farzin Mou, vice president of Enverus Intelligence Research, said in a note. That could ease pressure on gasoline prices, but the underlying cost of crude oil should remain high, in part because of the recovery in demand for jet fuel and diesel fuel. A barrel of West Texas Intermediate is selling for about $80, double what it cost a year ago.

In a separate note from Enverus looking further ahead, analyst Jen Snyder said, "We expect oil and gas production growth to outpace demand growth in 2022 and 2023 -- a return to normal weather conditions in key markets and a recovery in upstream activity levels this year will restore some balance." Upstream activity refers to the extraction of petroleum from wells, as opposed to refining or distribution.

Dickson, at Rystad Energy, also expects a growth in the supply of oil next year.

The monthly OPEC and Russian production increases, though gradual, will begin to add up, Dickson wrote, and the continuing high price of oil should encourage U.S. shale production to experience a growth spurt. Also, she said, if a new Iran nuclear deal is worked out, as seems possible, that could lead to the "re-emergence of Iranian barrels" on the world market.

The price of coal from Central Appalachia has increased about 60% over the past year, according to the EIA, with somewhat smaller increases in other regions. Coal accounts for about 20% of the electricity generated in the United States, EIA figures show. The global price is nearly triple what it was a year ago, but it is declining after a sharp spike in October when shortages of natural gas and wind power struck Europe and electric power companies there leaned heavily on coal.

Information for this article was contributed by Will Englund of The Washington Post, Kamaron Leach and Emily Graffeo of Bloomberg News and Jeanna Smialek and Jim Tankersley of The New York Times.