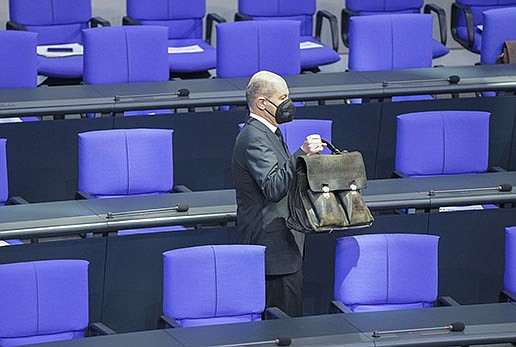 German Vice Chancellor and Finance Minister Olaf Scholz arrives for a debate about the measures to battle the coronavirus and COVID-19 at the parliament Bundestag in Berlin, Germany, Thursday, Nov. 11, 2021. Germany’s national disease control center reported a record-high number of more than 50,000 daily coronavirus cases on Thursday as the country's parliament was set to discuss legislation that would provide a new legal framework for coronavirus measures. (Kay Nietfeld/dpa via AP)

MOSCOW -- Europe was one of the first regions in the world to deploy coronavirus vaccines, yet parts of the continent are now seeing a resurgence in cases, with some countries experiencing their highest infection levels of the pandemic.

Covid-19 infections and deaths in Russia remain at all-time highs. A task force on Thursday reported 40,759 new confirmed cases and 1,237 deaths -- both numbers only slightly lower than the record daily tallies of 41,335 infections and 1,239 deaths registered earlier this month.

The surge in infections and deaths comes amid low vaccination rates, lax public attitudes toward taking precautions and the government's reluctance to toughen restrictions.

In Russia, the Sputnik V vaccine has been widely available since the spring but has been met with a mix of ambivalence and mistrust.

A doctor in St. Petersburg, Lev Averbakh, recently told The Washington Post that he was "so sick and tired of explaining to people what this virus is about and why they need to be vaccinated."

Fewer than 40% of Russia's nearly 146 million people have been fully vaccinated, even though the country approved a domestically developed covid-19 vaccine months before most of the world.

Germany reported a record-high number of more than 50,000 daily coronavirus cases on Thursday as lawmakers mulled legislation that would pave the way for new coronavirus measures.

Sputnik V, however, was excluded from the U.S. list of accepted vaccines because it has not yet been approved by the World Health Organization. King said that authorization from the World Health Organization or European Union could make international travel an incentive for Russians to get vaccinated and also "eventually help change attitudes towards the vaccine within the country."

The institute also reported 237 daily covid-19 deaths, bringing Germany's pandemic death toll to 97,198. One of the country's top virologists, Christian Drosten, warned on Wednesday that another 100,000 people could die in the coming months if the country's vaccination rate didn't accelerate quickly.

Safe and effective vaccines have been available for months. But as winter approaches in Central and Eastern Europe, vaccination rates in many countries are lagging behind.

"The pandemic is anything but over," German Health Minister Jens Spahn said at a recent news conference.

"We are currently experiencing a pandemic mainly among the unvaccinated," he said. "And it is massive."

Unlike some other European countries, Germany has balked at making vaccinations mandatory for certain categories of workers and has struggled to persuade more people to voluntarily get shots.

At least 67% of the population of 83 million is fully vaccinated, according to official figures.

"In Germany, I must say, unfortunately, that our vaccination rate isn't high enough to prevent the fast spread of the virus," Chancellor Angela Merkel said late Wednesday.

Russian authorities said Thursday they were preparing new restrictions aimed at curbing the unrelenting surge of coronavirus infections that has engulfed the vast country in recent weeks.

The state coronavirus task force announced it was drafting legislation to expand the system of QR codes, already used in many regions to restrict access to certain public places, to include public transport, cafes and shops. The system only allows access to people who have been vaccinated, have recovered from the virus recently or can provide a negative coronavirus test no older than 72 hours.

It wasn't immediately clear when the new measures will be imposed, whether they would be nationwide or when this legislation will be introduced into the parliament.

Shortly after the task force's announcement, officials in the Russian republic of Tatarstan said they would introduce QR codes on the region's public transport.

Russian President Vladimir Putin ordered many Russians last month to stay off work between Oct. 30 and Nov. 7. He authorized regional governments to extend the number of non-working days if necessary, but only five regions have done so.

Other regions have restricted access to restaurants, theaters and other public places under the system of QR codes, which must be obtained from a government website.

Daily tallies of new infections and deaths have remained high throughout the non-working period and after it ended. Around 40,000 cases and over 1,100 deaths have been reported every day since late October.

St. Petersburg, Russia's second largest city, and the southern Krasnodar region, home to the popular Black Sea resort of Sochi, have made vaccinations mandatory for those older than 60 and those suffering from chronic illnesses. Residents of the two regions that fall into either of the two categories must get their first shot before mid-December and complete their vaccination before mid-January.

In total, Russia's state coronavirus task force has reported more than 8.9 million confirmed infections and over 251,000 deaths -- by far the highest death toll in Europe.

Some experts believe the true figure is even higher.

Russian officials have said the task force only includes deaths for which covid-19 was the main cause, and uses data from medical facilities. Rosstat uses wider criteria for counting virus-related deaths and takes its numbers from civil registry offices where registering a death is finalized.

Vice Chancellor Olaf Scholz, who is likely to take over as chancellor, echoed Merkel, telling lawmakers that everything must be done to get more people vaccinated.

"The virus is still among us and threatening our health," said Scholz. "We must make sure that vaccinations are conducted and that they are conducted at high speed."

A caretaker national government has governed Germany since a September parliamentary election. The three parties that are expected to form the new government are looking to replace a March 2020 "national epidemic" declaration at the end of the month with new legislation for enacting covid-19 measures.

Scholz announced that the three parties -- his own Social Democrats, the Greens and the pro-business Free Democrats -- plan to to re-open vaccination centers across the country so that people can receive booster shots swiftly.

Other virus measures include free tests, daily or frequent testing at nursing homes and schools and tougher enforcement of measures.

Germany has had a patchwork of regional rules throughout the pandemic. Most places permit access to many indoor facilities and events only to those people who have been vaccinated, have recovered from covid-19 or had a recent negative test.

Scholz said both he and Merkel agreed that the federal government and all 16 states need to meet again next week to find common solutions on how to counter the infection spike.

"That is what we need now: for the country to stick together and pull in one direction so that we can get through this winter," said Scholz.

Information for this article was contributed by Daria Litvinova and Kirsten Grieshaber of The Associated Press and by Bryan Pietsch of The Washington Post. 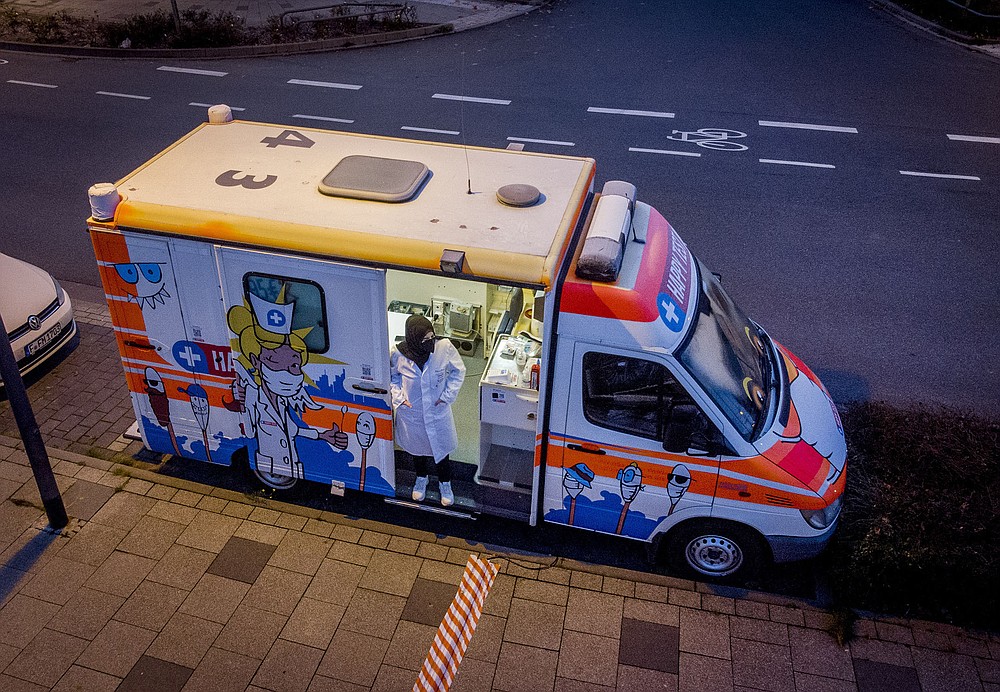