After snapping skid, Golden Lions look to build on victory 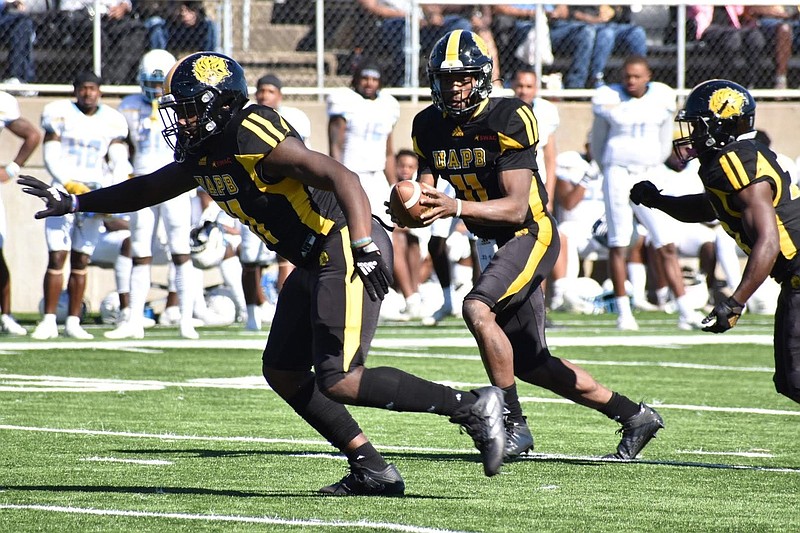 UAPB quarterback Skyler Perry, one of two reigning SWAC Offensive Players of the Week, is hoping to pick up another win at home today against Florida A&M. (Pine Bluff Commercial/I.C. Murrell)

In a season full of disappointments, the past seven days could hardly turn any brighter for the University of Arkansas at Pine Bluff football team.

On top of winning its first game since Sept. 4, the Golden Lions earned two Southwestern Athletic Conference Player of the Week honors, one for quarterback Skyler Perry as top offensive player (shared with Alabama A&M University wideout Dee Anderson) and another for cornerback Andre Fuller as Defensive Player of the Week.

Now the Golden Lions (2-7, 1-5 SWAC), who ended a seven-game losing streak in last week's 33-26 home win over Grambling State University, are going for their first winning streak since April, when they closed the spring regular season 4-0 and had won five overall, counting a season-ending win in 2019.

"It was especially good because it helped us stop the bleeding over the past couple of months," Lions Coach Doc Gamble said.

The Lions pulled out a win despite playing with what Gamble called a "M*A*S*H*" unit on defense, seeing some wide receivers move into the secondary and linebackers move down to defensive end to fill the roles of injured starters.

"I started out last Sunday and Monday looking through the roster to see who had a defensive background coming out of high school," Gamble said. "We made it happen. They thought I was crazy when I started running through dudes – 'What about him? What about him?' -- and as I started going through the injury report, we started looking at 'Here's what we can do' and watered down coverages and allowed the guys to line up and play."

Gamble simplified his defense to man-to-man coverage, which he terms "Cat defense," meaning "I got that cat, and you got that cat."

Next on the docket is Florida A&M University (7-2, 5-1), which has won six straight and played consistently in its first season since 2019, as the Mid-Eastern Athletic Conference canceled its 2020 season due to the pandemic. Kickoff in the Lions' home finale is 2 p.m. today at Simmons Bank Field at Golden Lion Stadium, with a live stream available on ESPN+.

"It's going to be another tough game," Gamble said. "Florida A&M is another good football team. Their two losses come from an FBS program [University of South Florida] and another good team in Jackson State. They're rolling right now, and they've figured out things at the quarterback position, which I hoped by this time of the year, they hadn't figured things out."

The Rattlers, who beat Southern University 29-17 last Saturday, have settled on junior Rasean McKay, who has thrown for 1,701 yards and 14 touchdowns and four interceptions while completing 57.6% of his passes.

McKay had shared snaps with freshman Junior Muratovic (20 for 35, 180 yards, 1 touchdown, 2 interceptions) earlier in the season.

"He's a guy who really studies the game," Rattlers Coach Willie Simmons said. "He really cares, cares as much as anyone I've been around. Extremely hard worker and tough kid. He's taken tough shots this year physically, but also mentally. He's taken a lot of criticism, some just, some unjust, but that's the nature of the quarterback position at FAMU. He just continues to get better every week, maturing, growing. The game is slowing down for him."

UAPB and FAMU are meeting for the first time as conference foes. FAMU and in-state rival Bethune-Cookman University joined the SWAC on July 1.

The only game keeping the Rattlers out of the driver's seat for a spot in the SWAC championship game is a 7-6 loss to Jackson State University in the season opener.

Still, Simmons has kept the Rattlers in a playoff mindset, hoping they can win out and Jackson State can drop two games in order to win the Eastern Division. While the SWAC typically does not send a team to the NCAA Division I playoffs – the division champions would play in the conference title game for a berth in the Celebration Bowl during the tournament – Simmons sounded hopeful the Rattlers would at least receive an at-large bid.

"Aspirations are contingent on us winning out," Simmons said. "As far as FCS playoffs, we feel a loss would knock us out of contention for that, as well."

Senior Bishop Bonnett has rushed 114 times for 774 yards and four touchdowns for the Rattlers.