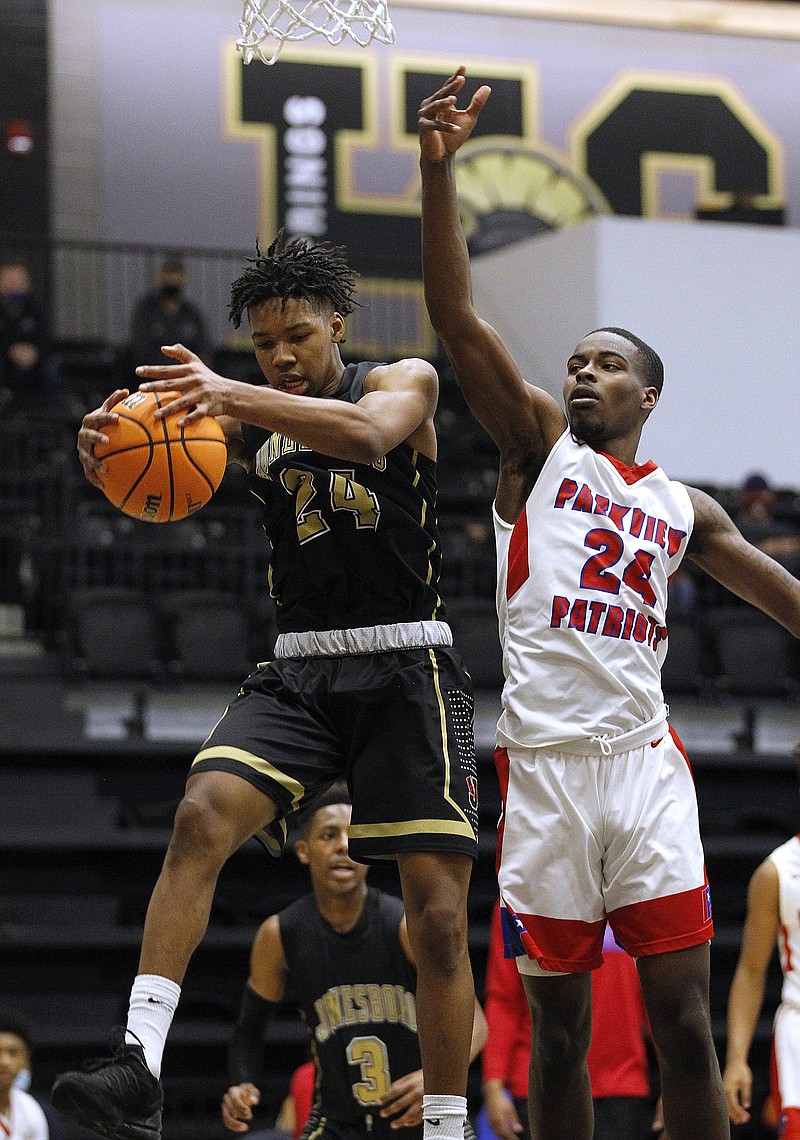 Jonesboro senior guard Kavon Pointer is one of the top returners for the defending Class 5A state champion Hurricane, who are ranked No. 1 in the Democrat-Gazette’s Class 5A boys Super Six. (Arkansas Democrat-Gazette/Thomas Metthe)

TOP TEAMS AT A GLANCE

NOTEWORTHY One of the top overall lineups in the state. ... The one starter Jonesboro lost was one of the best in program history in Keylin McBride. ... Isaac Harrell, a 6-7 junior, is going to be a force as well. ... The out-of-conference portion of the schedule may be the toughest Swift has assembled since he's been the head coach.

NOTEWORTHY Thurman has a group that'll hover near the top of the overall rankings all year. ... Wallace recently committed to the University of Central Arkansas. ... Kamanga is a solid defender and rebounder. ... Nate Coley (5-10, Jr.), J.K. Sanders (6-2, Sr.), Addison Shelton (6-0, Jr.) and Darius Miller (6-1, Sr.) are all steady players who bring energy and shooting whenever they're on the floor.

NOTEWORTHY The Forrest duo was already going to make Marion tough, but the others make them even tougher. ... Terrion Burgess is a big addition to this Patriot squad. ... This team will be stingy on defense, particularly on the perimeter. ... Several tournaments, including the Hoopin' For Hoodies Classic (at North Little Rock) and the Rumble in the Ridge (at Forrest City), are upcoming for Clark and his guys.

NOTEWORTHY The backcourt of Daughtery Jr., who's got multiple Division I offers, and Colby Garland, who was an all-stater at Magnolia and has a slew of offers as well, is going to be special. ... Length down low with Davillier and Thurman will be imposing. ... The Hornets reached the state championship game last season, where they lost to top-ranked Jonesboro 58-56.

NOTEWORTHY Ty Robinson is going to wow a lot of people this season. ... Pennington has already picked up where he left off a year ago by dropping 35 in the Wolves' season opener. ... This team is deeper than it was last season. ... Look for impressive outings from transfer guard Demetrius Sharp, who was big-game player at Pulaski Academy.

NOTEWORTHY Pine Bluff is still surging with a young team. ... Harris is a load anywhere on the floor for Dixon. He, along with Crutchfield, were all-state players last season. ... Overall guard play will be strong. ... The conference should be tough with Lake Hamilton, Hot Springs, El Dorado and White Hall all contending.

Can hurt teams in a multitude of ways and may have the biggest upside of anyone is his class, and that includes nationally. The sophomore, who's ranked as the No. 23 player in the Class of 2024 and a four-star prospect by ESPN, has offers from several Power 5 schools, including Auburn, Illinois, Texas A&M and Texas Tech. He'll be a household name in the state by year's end.

As soon as football ends, he'll jump right onto the hardwood and be just as effective. He can handle the ball and pull up whenever he needs to. Harris can also create for others, which is something Coach Dexter Hendrix loves to see. Harris is also a slasher and attacker, and that's also something Hendrix loves.

Not many people know about him, but they will soon enough. He turned heads at various summer camps, and it's only going to get better. Mississippi and the University of Arkansas at Pine Bluff have already extended offers but more will come. He poured in 25 points against No. 2 Little Rock Parkview on Thursday.

1. What does Jonesboro do for an encore?

There's a lot the Golden Hurricane can do but repeating as state champion is at the top. Jonesboro will play an extremely tough schedule, which will give them chances to make a name for itself on a national level. Swift will have these guys ready to play in each of those games. Once he gets his football players in and has his whole team intact, look out.

The deepest, from top to bottom, in the state. There's always the regulars, like Jonesboro, Little Rock Parkview and Marion. Pine Bluff, Lake Hamilton and Maumelle are all title contenders. Then, there's a young and improving White Hall team under Josh Hayes, Little Rock Christian is going to be good, Russellville isn't going anywhere and Benton has talent. To make it even more stout, Jacksonville is restocking, El Dorado is coming and Hot Springs isn't shabby.

3. Like other classes, is there an under-the-radar group that could slip into the title conversation?

Of all the aforementioned teams (outside of the Super Six), Little Rock Christian has a chance to be salty. The Warriors lost star guard Layden Blocker to Sunrise (Kan.) Christian, but his little brother Landren is a dynamic sophomore. Creed Williamson has offers from Arkansas, St. Johns and UAPB among others, Riley McGuirk is a knock down shooter and Jameel Wesley is a true playmaker. Little Rock Christian has more in the tank, too.

TOP TEAMS AT A GLANCE

NOTEWORTHY The defending champs will have a bull's-eye on their backs after winning the Class 5A title in March. ... Hardaway has signed with North Texas and Thomas has inked with Memphis. ... Freshman Allannah Orsby will be a good one for years to come. ... Lady Hurricane have challenging tests before getting into league play.

NOTEWORTHY The Lady Warriors begin life without Wynter Rogers, who left her mark on the program before heading to West Virginia. ... Elley has signed with Alabama-Birmingham. ... Smith, along with Katelyn Harris, solidifies Little Rock Christian's backcourt. ... Ashley Hopper and Sheridan Cross at one of the best rebounding tandems in Class 5A.

NOTEWORTHY The Lady Bulldogs will have to replace three very good players in Kinley Fisher, Ally Sockey and Shea Goodwin, not to mention others. ... Gray recently inked with Hendrix. ... Summitt could be in line for an impressive year after experiencing some big moments last season. ... Cartwright was an All-Arkansas player as a sophomore.

NOTEWORTHY The Lady Patriots' run to last season's semifinals wasn't exactly a fluke because that team had talent, just like this year. ... Jackson had 18 points in Marion's 33-point blowout of Hernando (Miss.) in its first game. ... Cail has committee to play volleyball for UALR.

She's still one of the best floor generals in Arkansas and will undoubtedly be the main catalyst for the Lady Raiders. Pena, a four-year starter, has signed with Murray State, where she'll have an impact immediately – much like she will this year. She'll carry the torch for Nettleton, which will try to get back into the state tournament after missing out last season.

She has the same skill set as former Parkview great Crystal Boyd, and that's a great thing for Coach Lahoma Howard. Davis gets it done at a high clip on defense, but she can put up buckets at an alarming rate on offense. Her mid-range game stand outs, particularly that jumper from 13-16 feet.

There aren't many who'll be able to slow down Tucker, a cat-quick guard who has a knack for getting to the basket. She led West Memphis in scoring last year at nearly 17 points per game and can rebound well for her size. The Lady Blue Devils are primed for a big year, and Tucker will be at the forefront of that.

1. How will Greenwood respond out west?

Coach Clay Reeves has a program in place, which means he'll be able to retool this year after losing so much offense to graduation. The Lady Bulldogs will have a different look to them, but they'll still be the hunted in the 5A-West. Vilonia lost key production as did Russellville (although the Lady Cyclones are on the rise). Greenbrier and Siloam Springs will be there to pose issues for Greenwood as well.

Every team will be a threat to the other. Jonesboro, Marion and West Memphis, which were all in the semifinals last season, bring a lot back. Nettleton still has Briley Pena and D'Maria Daniels, and Carson Defries is as good of a shooter in Class 5A over at Paragould. Batesville did lose Izzy Higginbottom, but her contributions only boosted the confidence of the remaining Lady Pioneer players. Greene County Tech should be improved as well.

3. What team or teams will surprise?

Count Little Rock Parkview as one that could make a run. The Lady Patriots showed glimpses last season of how good they could be. The problem was that they were inexperienced. They're still relatively young, but those players are a year older. Jasmine Davis and Tyra Robinson can score, Jada Page can get to the lane as good as anyone and both Jordan Gregory and Kylie Bell can shoot it. 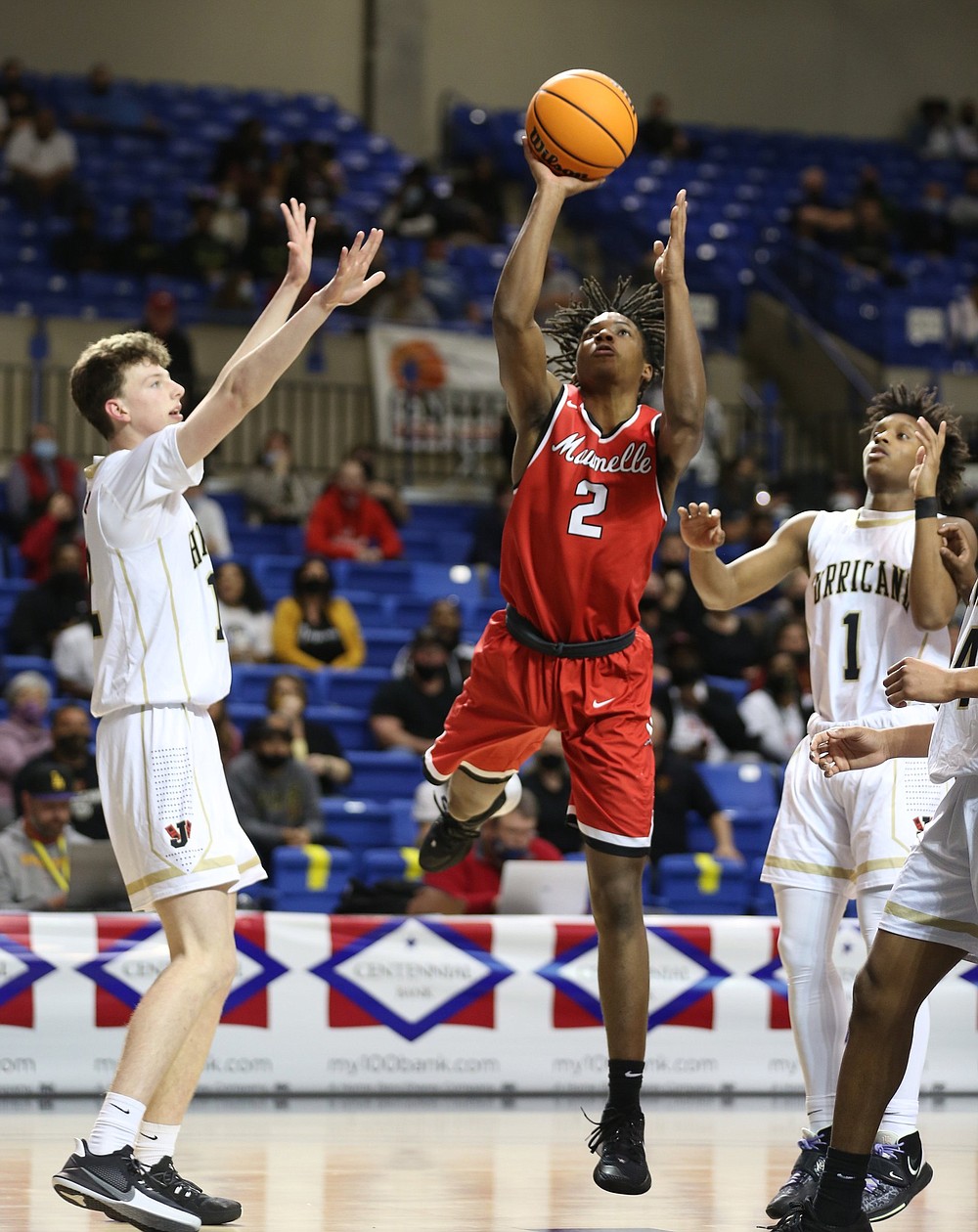 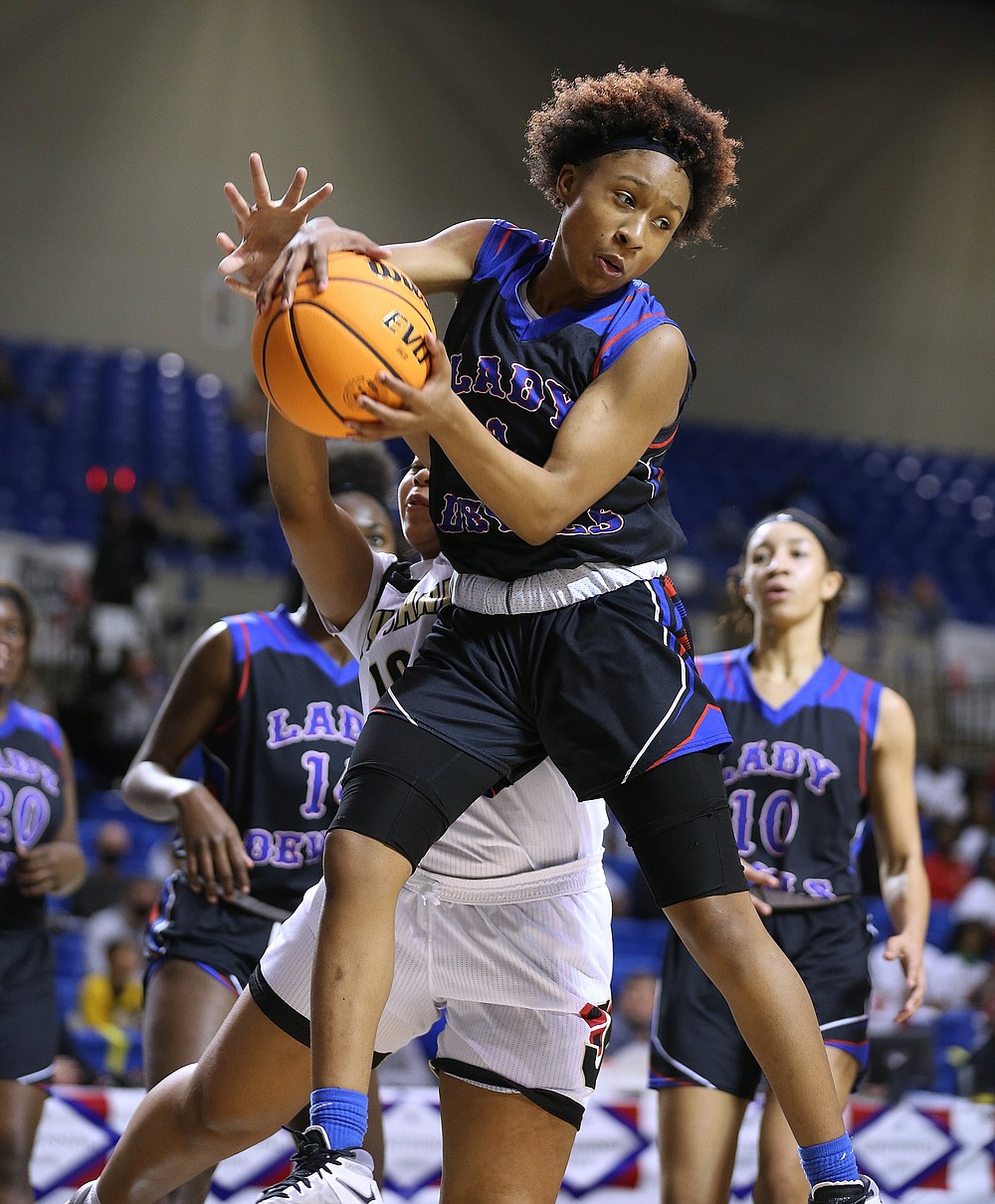 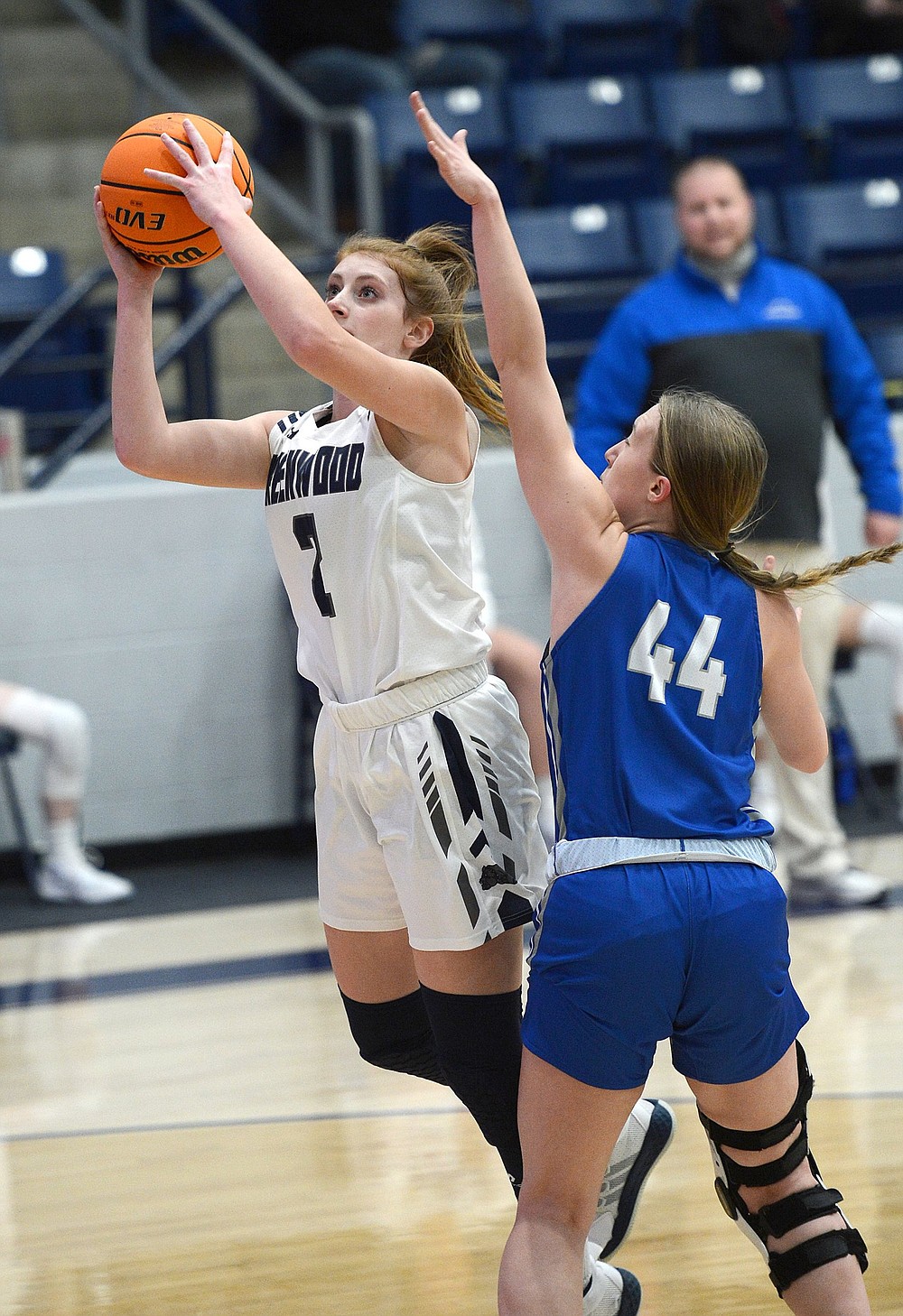 Greenwood will count on junior forward Mady Cartwright to keep the Lady Bulldogs among the top teams in Class 5A this season. (Special to the NWA Democrat-Gazette/Brian Sanderford)