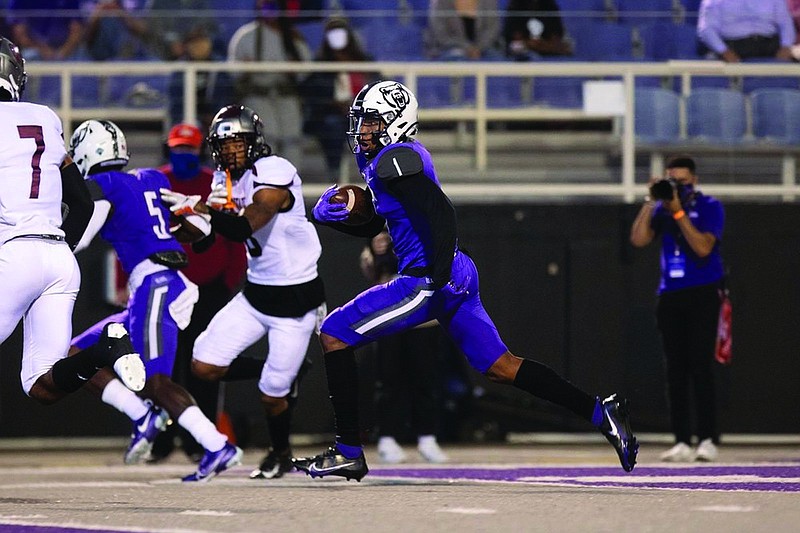 NOTEWORTHY UCA’s Breylin Smith and SFA’s Trae Self are both top-15 passers in the FCS, with Smith being No. 6 in the country in pass yards (2,721) and Self No. 15 (2,435). … The Lumberjacks’ main receiving threat, Xavier Gipson, is No. 3 in the FCS in receiving yards (1,013). … SFA comes into the week receiving votes in both the FCS Media and Coaches Poll, with a respective 54 and 38 points in each. … The Bears are expected to be without starting left tackle BK Collier this week, who’s missing the game for a death in the family. UCA did not release a depth chart ahead of this week’s game.

It didn't take University of Central Arkansas receiver Tyler Hudson long to break another record in last Saturday's 63-3 win against Texas Wesleyan. In fact, it only took him one play.

Hudson caught a pass that quarterback Breylin Smith threw from the Bears' own end zone to around their 45. And, with an open field in front of him, Hudson scored on a 93-yard touchdown on his first catch of the game.

Hudson, who has two years of eligibility remaining, came into the game needing 21 yards to break UCA's career record for receiving yards. His 93-yard score put him at 2,900 career yards, and he finished the game with 178, putting his career total at 2,985. He breezed by the previous record of 2,828, which was set by Desmond Smith, who played for the Bears from 2012 to 2016.

It's not the first record Hudson's broken this season, either. He broke the single-game record for receiving yards with 251 yards in UCA's 38-35 loss to Eastern Kentucky. The record stood for more than 40 years. Ron Mallett tallied 242 yards against Ouachita Baptist in 1980.

It's clear Hudson, who's No. 2 in the FCS in receiving yards, isn't surprised by his record-breaking success. If anything, he expects it. He said following last week's win that he came to UCA as a freshman with the goal of breaking as many records as possible.

As his career and season has progressed, Hudson's also had a chance to build rapport with some past notable Bears receivers. Those names include Mallett, Desmond Smith and Dezmin Lewis, who's also carved out his place in the UCA record books.

"I would think that that is one of the most unique fraternities ... when it comes to the history of a room at a school, and that's the way our wide receiver room is here at UCA. I mean we've got a deep history of great wide receivers," UCA Coach Nathan Brown said before listing off a dozen former UCA receivers. "All of them are connected by one thing -- being a UCA wide receiver.

"And that's what's neat, is to watch those guys, and even the older-era guys, really invest in our younger guys."

Brown, who's been the Bears' head coach since 2017, not only carved out a notable playing career for the Bears, but has spent his entire coaching career in Conway since it began in 2009. He's been around for several standout careers, including both Smith and Lewis.

Brown said he sees hints of both receivers in Hudson. Specifically, a shared natural athleticism with Lewis and an innate ability to track the football that's similar to Smith.

"We've been so blessed here at UCA to have guys like those three that we've mentioned," Brown said. "The ability of some of these players and wide receivers we've had in that room over the last 10 years has been phenomenal."

Lewis, who's fourth all-time in career receiving yards in school history, took to Twitter to congratulate Hudson after setting the career record Saturday.

"On the field, Tyler is right there," Lewis said. "It is weird to say this, because I'm watching him on film, but it just looks like he's just having fun out there. ... He's just going out there, being a kid and playing the game he's played his whole life, and I think that's a great mindset."

Lewis and Hudson, both native Texans, have built a relationship since the latter got to UCA, but Lewis isn't the only former receiver Hudson has met. Ahead of the Bears' 43-34 loss to Missouri State, Hudson actually got to meet Mallett.

"When I talked to him, he was telling me I just need to keep working, and one day I'll get there," Hudson said in reference to his conversation with Mallett. "I mean, eventually, I ended up getting there like two weeks later.

"It was really cool to see him, and then knowing that he had the record and that he was a UCA great and all that, and then to go and beat his record two, three weeks later. It was just a surreal moment for me."

Regardless of who he meets next, it's evident that, moving forward, Hudson's focused on carving out more space for his name in UCA's record books.

"To be able to accomplish this one already," Hudson said last week, "it's kind of motivating for me to go and break some other records."