Jefferson in charge for Hogs 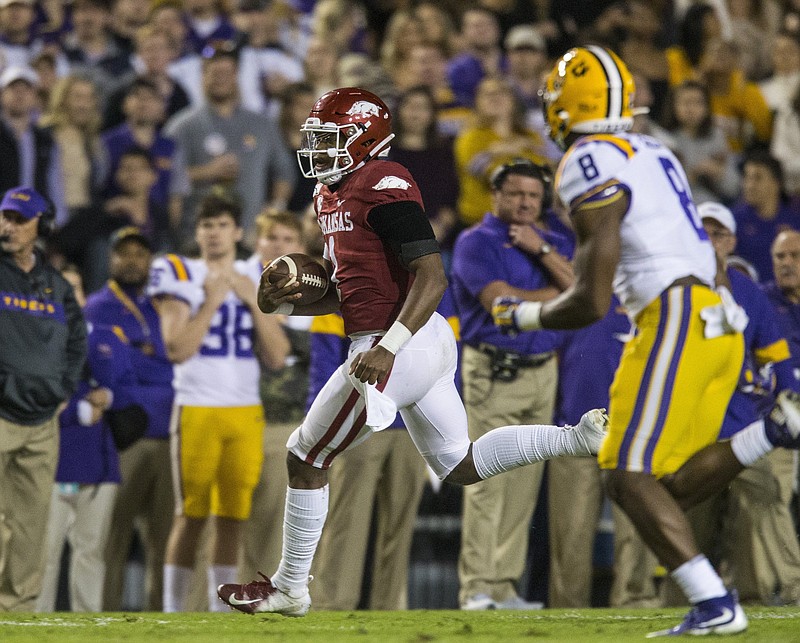 Arkansas quarterback KJ Jefferson made his first collegiate start in 2019 at top-ranked LSU. The Tigers won 56-20 and Jefferson left the game in the third quarter with a concussion. (Democrat-Gazette file photo)

FAYETTEVILLE -- Two years ago University of Arkansas quarterback KJ Jefferson was thrown into the fire as a true freshman, making his first career start at LSU's Tiger Stadium.

"Pretty cool experience just going down there," Jefferson said this week. "The only thing I really remember is it being very loud. Like, extremely loud.

"That's about the only thing I remember about Death Valley."

Jefferson, who completed 7 of 14 passes for 105 yards and was sacked 3 times, can be forgiven for not remembering too much about LSU's 56-20 victory considering he left the game in the third quarter after sustaining a concussion.

On the plus side for Jefferson, he led two drives that set up field goals and had Arkansas within 7-6 early in the second quarter before LSU -- which won the national championship with a 15-0 record -- pulled away.

Jefferson, a redshirt sophomore from Sardis, Miss., will return to Tiger Stadium for tonight's Arkansas-LSU game a far different quarterback.

"I just remember him being a raw, young guy, hadn't really played a lot of snaps going into that LSU game," said Razorbacks junior tight end Trey Knox, who also played as a true freshman at Tiger Stadium. "So just a little antsy in the pocket.

The drive was capped by Dominique Johnson's 4-yard touchdown after Jefferson had a 5-yard scramble on the play before -- when it looked like he might be sacked -- and completed 6 of 7 passes.

"On the last drive, he just made great decisions, stayed calm, and made plays," said Knox, who caught three passes on the drive. "That's what I think he is right now."

"When he took over he was young, but you could tell he was a great athlete, a beast, like a big defensive end back there," LSU Coach Ed Orgeron said of the Jefferson he remembered from 2019. "Big, physical guy. An athlete.

"He's going to be a load to tackle. We have to gang tackle him. He's a very, very impressive player."

Sam Pittman, in his second season as the Razorbacks' coach, said he hasn't watched tape of the Arkansas-LSU game from two years ago, but that Jefferson has made significant improvement from his lone start of 2020 at Missouri.

Jefferson, who started because senior Feleipe Franks was sidelined by a rib injury, completed 18 of 33 passes for 274 yards and 3 touchdowns with an interception and rushed for 32 yards and one touchdown in Missouri's 50-48 victory.

The Tigers won the game with a field goal on the final play after Jefferson led a 75-yard drive and hit Mike Woods for a touchdown and two-point conversion to put the Razorbacks ahead 48-47.

Pittman said that during the Razorbacks' open date last month, the coaching staff reviewed the Missouri game from last year because they'll have a short week to prepare for the Tigers this season with the game being on the Friday after Thanksgiving.

"Just looking at how he played a year ago to how he's playing now is quite different," Pittman said. "I think his confidence and how he sees the field. He's throwing the ball better than what he did before.

"His reads seem natural for him. ... I feel like he's just playing faster, and certainly smarter. All this experience that he's getting has certainly helped him."

Jefferson is one of 10 FBS quarterbacks to have more than 1,600 passing yards and 40 rushing yards.

"Him being able to step up for us in that game, in that type of environment, was big," Arkansas senior safety Joe Foucha said of Jefferson's start at LSU as a true freshman. "I think it helped him out a lot this year for those moments, because every game we play is going to be a big game.

"The growth that he's had these last couple of years, I feel like that game prepared him the most because he was thrown in the fire and he did pretty well. You can see how far he's progressed since then."

Jefferson said despite the Tigers knocking him out of the 2019 game, he's not out for revenge tonight.

"I mean, I just play ball," Jefferson said. "I don't try to look for revenge."