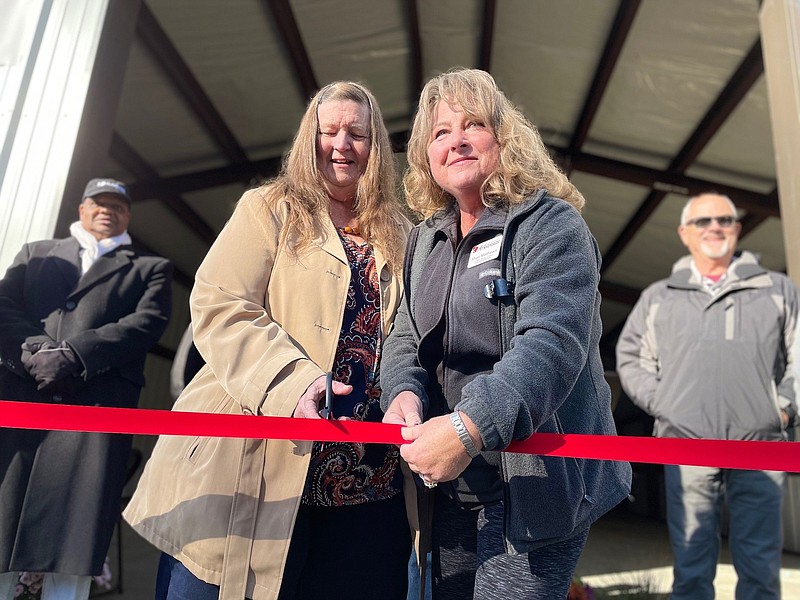 Janice Mann (holding scissors) prepares to cut the ribbon at the dedication of the Byron and Janice Mann United Methodist Disaster Response and Missions Hub in Conway on Nov. 6. Mann and her husband, Byron, will retire as the disaster relief coordinators for the Arkansas Conference of the United Methodist Church, a post that will be filled by the woman holding the ribbon, Sheri Mathews. (Arkansas Democrat-Gazette/Frank E. Lockwood)

CONWAY -- Arkansas Methodists dedicated their new emergency relief center this month, naming it in honor of a couple who have been ministering to storm survivors for more than 15 years.

The Byron and Janice Mann United Methodist Disaster Response and Missions Hub, which is behind Wesley United Methodist Church in Conway, will be a storage facility, a training and case management site, and a gathering spot for emergency relief and recovery teams.

At year's end, the Manns will retire as coordinators of the Disaster Response and Volunteers in Mission program for the Arkansas Conference of the United Methodist Church.

Byron Mann will continue to pastor in Jasper, leading "the only Methodist church in Newton County," he said.

Since responding to their first hurricane in the Bahamas in 2004, the Manns have repeatedly come to the aid of storm survivors. Most recently, they helped survivors of Hurricane Ida, which hit Louisiana hard in August.

Over the years, the Manns have inspired other Arkansas Methodists to get involved as well.

Most of the calls for help have come from the South.

"We made 11 trips and took 11 teams to Pass Christian, Miss., to do recovery work on Katrina," Byron Mann said. "We've done several others since then."

A city of 5,686 located 65 miles northeast of New Orleans, Pass Christian was nearly wiped out by wind, rain and a storm surge estimated at 28 feet.

"They were on the east side of the eye wall and there were a lot of houses there that were completely gone, just nothing but concrete slabs," Mann recalled.

Eager to help, the Manns made the 900-mile round-trip journey between southwest Arkansas and the Mississippi Gulf Coast again and again. They were joined, early on, by volunteers from Hope, where Mann was pastoring at the time.

At first, the emphasis was on debris removal and damage mitigation, placing tarps on heavily-damaged roofs and cutting up downed trees. Later, the emphasis shifted to recovery.

In 2009, the Manns were named disaster relief coordinators for the Arkansas Conference's Southwest District. Two years later, they were placed in charge of the statewide apparatus.

Since then, they have helped to recruit and train an army of volunteers.

The disaster teams partner with the United Methodist Committee on Relief, the denomination's global humanitarian aid and development agency.

"Their mission, as they state it, is to provide a caring, Christian presence in the aftermath of disaster," Janice Mann said. "That's our main goal."

In 2014, they provided disaster relief here in Arkansas, rushing to Vilonia and Mayflower after an EF-4 tornado left a 41-mile-long trail of destruction across Pulaski, Faulkner and White counties.

With winds between 166 and 200 mph, the April 27 storm claimed 16 lives and heavily damaged or destroyed hundreds of buildings.

Methodists rushed to help those affected by the storm.

Initially, the couple lived in an RV near the disaster zone so that they could devote more time to local relief and recovery efforts. Eventually, they rented a house in Conway.

Overall, they spent two years in and around the affected area.

In Arkansas and elsewhere, they collaborated with officials from other emergency response organizations, many of them faith-based.

"In disaster relief, all the denominational walls come down and we all work together ... for the same goal, and that's to help people that are hurting," she said.

As coordinators for more than a decade, the Manns have had a significant impact, according to Bishop Gary Mueller.

"They were here when I got there and I immediately started seeing how much a part of the fabric of the Conference [they are]," said Mueller, who became bishop in 2012. "They are so connected, not only throughout Arkansas but, really, throughout this whole part of the country."

Mueller portrayed the Manns as faithful and reliable.

"You've heard the phrase 'servant leader'? Their picture is in the dictionary when you look up that phrase. They are humble and hard-working," he said.

Roughly three dozen people showed up for the Nov. 6 dedication.

Following a prayer by Mueller, Janice Mann cut the ceremonial red ribbon as her husband looked on.

Afterward, the Manns participated in a table-top exercise with other Methodist disaster relief volunteers, imagining how they would respond in case Jonesboro was ever hit by an EF-3 tornado, with top winds between 136 and 165 mph.

Arkansas Methodists have applied for a $15,000 grant to help complete the facility.

"It's going to be awesome," Janice Mann said.

"We had stuff scattered, both equipment and supplies, scattered all over the state. Bringing it back to a central location that's easy [to] access anywhere in the state is going to be really beneficial," she said.

Moving forward, the Manns will dial back their involvement in disaster relief but they won't abandon it altogether, she said.

When disaster strikes, they will answer the call.

"Unless God changes it, our plan is to be here for Sheri as she transitions into leadership, [and to be] just regular volunteers for a change," she said.

They also hope to travel and "spend a lot more time with our grandkids," she added.