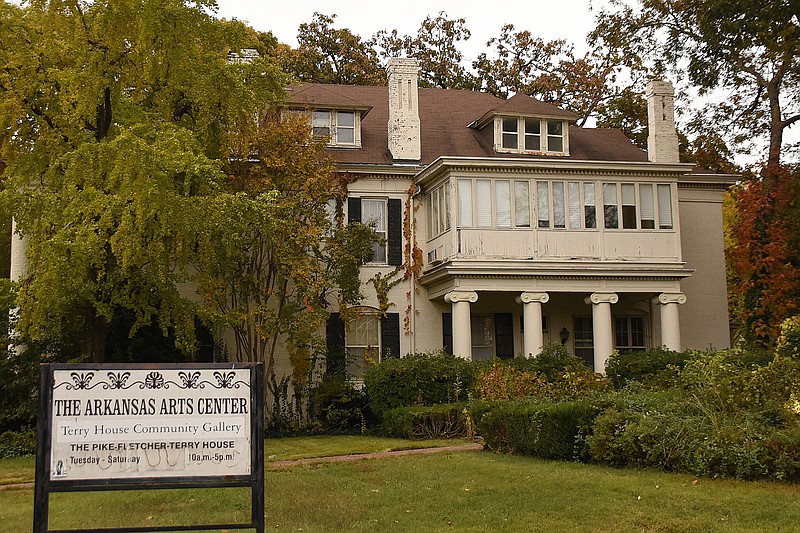 The Arkansas Museum of Fine Arts Foundation won't invest any more money in the historic Pike-Fletcher-Terry House, but it will keep paying the utility bills until June 30, according to an amended complaint filed Thursday in a lawsuit in Pulaski County Circuit Court.

The court filing is the latest salvo in a battle over who is responsible for maintenance and repair of one of Little Rock's most famous residences.

Built in 1840, the Pike-Fletcher-Terry House at 411 E. Seventh St. is one of the oldest buildings in Little Rock. It was home to three of the city's most prominent families. The two-story Greek Revival mansion, along with a well-shaded lawn, covers a city block spanning from Seventh to Eighth streets along Rock Street.

Warren Stephens, chairman of the Foundation's board of directors, and Little Rock Mayor Frank Scott Jr. knew the Foundation was going to relinquish operation of the historic Pike-Fletcher-Terry House, but months passed before anybody told the heirs of the two sisters who donated the house to the city in 1964, according to Thursday's court filing.

If the city breaches any conditions of the deed, title to the land reverts to the heirs of the donors.

According to the deed, the family gave the mansion to the city "for the use and benefit of the Arkansas Arts Center," which is now known as the Arkansas Museum of Fine Arts.

Stephens told the heirs on June 24 that he was going to send a letter to the city several months earlier to say the museum no longer had an interest in the property, but Scott told him verbal notice was sufficient, according to the court filing.

Stephanie Jackson, a spokeswoman for the mayor, confirmed that account.

"The city has been exploring, and continues to explore, all possible options for continuity of maintenance and upkeep," she said.

A capital campaign for a new museum building at MacArthur Park had raised $136 million as of January, surpassing its goal of $128 million, according to https://bit.ly/3Fs7DHR. Stephens is a co-chairman of that campaign, which has a new goal of raising $142 million.

"All monies were spent in accordance with the original intention of the donors," according to an Oct. 27 news release from Victoria Ramirez, executive director of the Arkansas Museum of Fine Arts.

When asked Friday if that meant the entire endowment for operation of the Pike-Terry-Fletcher House had been spent, she responded by email, "I am afraid we do not comment on matters in litigation."

The museum "does not own the building and has no contractual responsibility to operate or maintain it," according to the news release.

A spokesman for Stephens referred the Arkansas Democrat-Gazette to John E. Tull III, the attorney for the museum Foundation, who said "no comment" regarding the lawsuit.

Six heirs of Adolphine Fletcher Terry and Mary Fletcher Drennan filed a lawsuit Oct. 20 saying the Pike-Fletcher-Terry House has been neglected and fallen into disrepair, which violates the conditions set forth in the deed.

Their attorney is Richard H. Mays of Little Rock.

Claiming breach of contract, the heirs will take the building back if it's accompanied by the endowment, which could be used to restore the house.

Tull wrote in an answer to the complaint that the heirs can't legally recover money they didn't donate, and they lack standing to force an accounting of Foundation donations.

The initial $1 million for the endowment came from the estate of former Gov. Winthrop Rockefeller, according to court filings.

The money was to be used for "the purpose of endowing the operation of the Pike-Fletcher-Terry House," according to an Oct. 1, 1984, letter from Marion Burton, a co-trustee of the Winthrop Rockefeller Charitable Trust, to Robert Shults, who was an attorney for the museum and Foundation. The letter is included as an exhibit with the amended complaint.

[DOCUMENT: Read the amended complaint in the lawsuit » arkansasonline.com/1113terry/]

The amended complaint includes letters and news releases that weren't exhibits filed with the original complaint on Oct. 20. But no contract regarding details of how the endowment would be spent was included with either filing.

In addition to wanting attorneys fees, in the amended complaint, the plaintiffs are seeking an accounting of rental income generated by the Pike-Fletcher-Terry House.

"Such charges were not used by the Museum for the maintenance of the Property as required by the provisions of the Deed, but were used by the Museum and the Foundation for operating expenses or other purposes not related to the Property," wrote Mays. "The Defendants should be required to account for all use charges, fees and rentals, and the expenditure of such funds by them, and the Defendants be required to pay into the Endowment Fund for the Property all such income that was expended in violation of the restriction and condition contained in the Deed."

The house was built in 1840 for Albert Pike, who became a general in the Confederate Army, established a national reputation as an attorney and was one of the founders of the national Masonic fraternal organization, according to the lawsuit.

Later, the house was occupied by the family of Capt. John Gould Fletcher, a member of the Capitol Guards during the Civil War who became mayor of Little Rock and Pulaski County sheriff, according to the court filing. His son, John Gould Fletcher Jr., won the Pulitzer Prize for poetry in 1939.

His wife, Alolphine Fletcher Terry, was instrumental in forming the Women's Emergency Committee to Open Our Schools, which opposed former Gov. Orval Faubus' resistance to the desegregation of Little Rock Central High School in 1958, Mays wrote in a news release. The work led to the recall of three segregationist members of the School Board and the reopening of the Little Rock schools, according to the lawsuit.