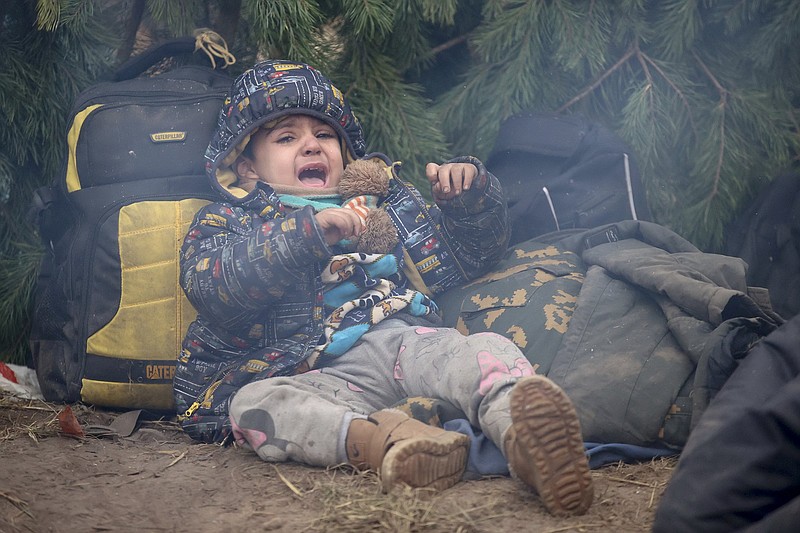 A child cries as other migrants from the Middle East and elsewhere gather Friday at the Belarus-Poland border near Grodno, Belarus. More photos at arkansasonline.com/1113belarus/. (AP/BelTA/Leonid Shcheglov)

European leaders accuse Lukashenko of orchestrating a migrant crisis on Belarus's border with the European Union in retaliation for sanctions, a claim Minsk denies. Lukashenko's approach has hardened Europe's position, with new sanctions being weighed.

Lukashenko's ally Russia has backed the Belarusian leader so far, but the Kremlin's rejection of his threat to cut Russian gas supplies transiting Belarusian territory to Europe showed limits to the degree of support from Moscow, especially where its gas interests are concerned.

Making clear that Moscow would not accept a minor transit player dictating its gas supply to Europe, Kremlin spokesman Dmitry Peskov said Russia would honor its obligations to Europe on gas regardless of what Minsk might do.

"Russia has been, is and will be a country that honors every obligation on gas supply to European consumers, as well as contractual obligations," Peskov said. "Russia's reliability as a supplier and a partner under current and future contracts is beyond doubt."

Peskov said the Belarusian leader did not consult Moscow before he spoke, although Putin has been in regular contact with Lukashenko.

"No, they [Lukashenko's statements] are not coordinated in any way. Yes, he is our ally, but it's a sovereign state," Peskov said.

[Video not showing up above? Click here to watch » arkansasonline.com/1113belavia/]

Natural gas prices in Europe fell back Friday after Peskov's remarks. On a benchmark futures market in the Netherlands, prices stabilized after a spike Thursday, Reuters reported.

European leaders do not recognize Lukashenko's legitimacy, rejecting the August 2020 presidential election and refusing to communicate with him. German Chancellor Angela Merkel twice turned to Putin this week to ask that he use his influence with the Belarusian leader to end the border crisis.

Putin responded that European Union leaders must engage directly with Minsk. Russia says it has no part in the migrant crisis unfolding on the border of Belarus and Poland.

With growing numbers of migrants stranded in freezing conditions in a forest on the border of Belarus and Poland, the Turkish civil aviation authority announced Friday that because of the crisis it would block citizens of Iraq, Syria and Yemen from flying to Belarus.

"Due to the problem of illegal border crossings between the European Union and Belarus, it has been decided that the citizens of Iraq, Syria and Yemen who want to travel to Belarus from Turkish airports will not be allowed to buy tickets and boarding until further notice," a statement from the Turkish aviation authority said Friday, offering refunds.

Belarus opposition figure Pavel Latushka told The Associated Press that Belarus has increased flights to Minsk from the Middle East, with about 40 a week from Istanbul, Damascus, Dubai and Beirut scheduled until next March.

[Video not showing up above? Click here to watch » arkansasonline.com/1113michalowo/]

According to Latushka and Belarusian human rights groups, migrants arriving in Minsk are being taken to hotels and other accommodation sites -- depending on how much they have paid. Once a group is formed, they are taken to the border, facilitated by Belarusian authorities and law enforcement officers, Latushka said.

Among the migrants are Iraqi Kurds and Syrians fleeing conflict, persecution or poverty. Many aim to reach Germany or other western European countries. German federal police say 1,246 unauthorized entries to Germany "with a connection to Belarus" were recorded in the first nine days of November. In all, there have been 9,087 such entries so far this year.

The situation is threatening to develop into a humanitarian crisis as winter approaches in the forested, boggy border area. It is also creating another point of tension between the West and Belarus' regime.

Poland has deployed thousands of troops to the border to prevent migrants from entering its territory, and Lithuania has constructed a 13-foot-high razor-wire fence on its border with Belarus.

Polish officials have accused Belarus of pushing migrants across the border into Poland, a claim Belarus denies. Belarusian Defense Minister Viktor Khrenin said Friday that Belarus's neighbors, including Poland, seemed ready to start a war on the border and "draw Europe into it."

Belarusian and Russian paratroopers conducted a joint tactical training exercise in Belarus as part of a readiness check, the ministry said Friday.

Lukashenko's government appears to be shifting migrants out of Belarusian cities and towns to a growing camp on the border, where authorities say more than 1,700 people have camped in the forest.

The migrant crisis came to a head Monday when a large column of migrants, escorted by armed Belarusian forces, walked toward the border with Poland to try to cross into the European Union.

The Belarusian State Border Committee said Friday that another group, of about 100 migrants, was moving toward the border. The Iraqi government has offered to arrange flights to help its citizens who wish to return from Belarus.

Information for this article was contributed by Robyn Dixon of The Washington Post and by Monika Scislowska, Vanessa Gera, Suzan Fraser, Vladimir Isachenkov, Yuras Karmanau, Lorne Cook and Samuel Petrequin of The Associated Press. 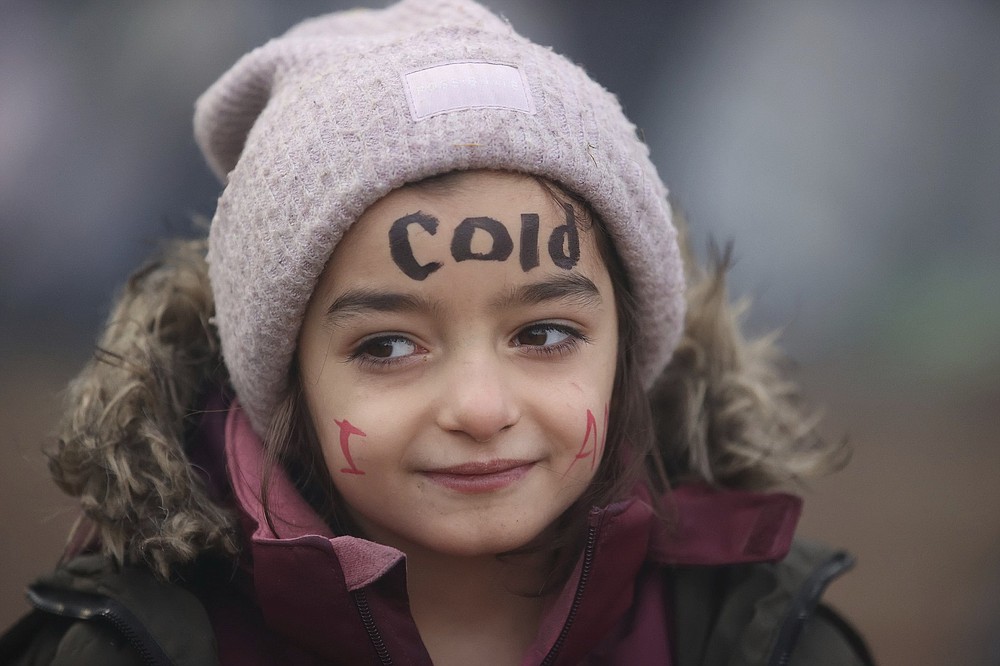 A migrant girl with the world Cold on her forehead poses for a photo as other migrants from the Middle East and elsewhere gather at the Belarus-Poland border near Grodno, Belarus, Friday, Nov. 12, 2021. About 15,000 Polish troops have joined riot police and guards at the border. The Belarusian Defense Ministry accused Poland of an &quot;unprecedented&quot; military buildup there, saying that migration control didn&#x27;t warrant such a force. (Leonid Shcheglov/BelTA pool photo via AP)
ADVERTISEMENT