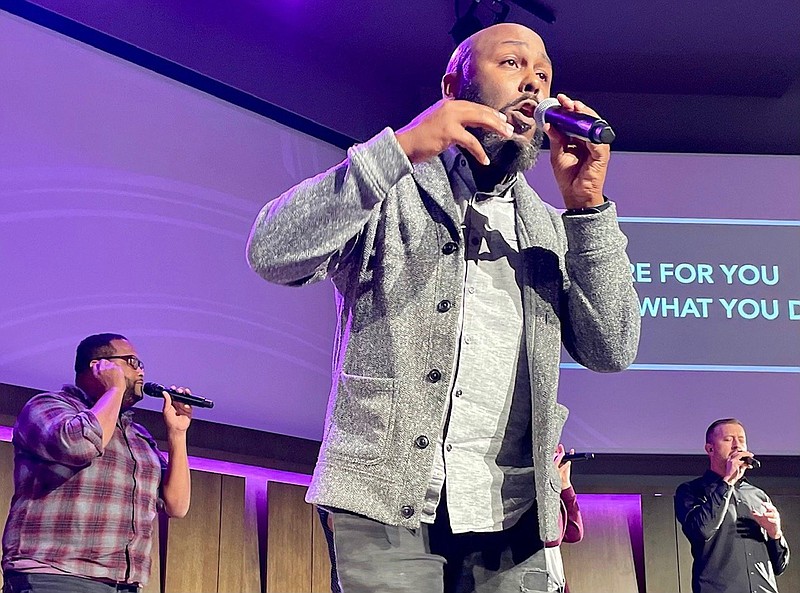 Derrick DePriest, worship minister at East Brainerd Church of Christ in Chattanooga, Tenn., sang at the Agape Conference, which emphasized building bridges between Black and white Christians and highlighted the way music can bring people together. DePriest is a member of United Voice Worship, which performed throughout the weekend at Pleasant Valley Church of Christ in Little Rock, site of the event; all of the music was a cappella. (Arkansas Democrat-Gazette/Frank E. Lockwood)

Members of the Churches of Christ from across the country gathered in Little Rock this month to discuss the need for racial unity and to look for ways to bridge the racial divide voluntarily.

In one session, people of color described the ways racism had affected them.

Nellie Beall, an immigrant from Malaysia, came to the United States to study at the University of Arkansas. She quickly discovered there were areas she was not welcome.

"I had a really good friend in the dorm that lived right next to me and she was from Harrison, Arkansas," she recalled.

When the holidays arrived, "she couldn't take me home at Christmas because she said it would be too dangerous for me," she said.

His family "had to prepare me to go back to his home, [warning] that people might look at me different and say stuff to me. And that was my first experience of really recognizing that my color made a difference," the Fayetteville woman said.

Glenda Thomas, who is Black, recalled attempting to to catch a ride to school on a rainy day in San Francisco when she was 8 or 9 years old.

A young neighbor invited her and her best friend to climb in; soon thereafter, the child's parent arrived and ordered them to get out, claiming "No room. No room."

Once the gradeschoolers had been evicted, the less-than-crowded car pulled away, the Little Rock resident recalled.

"If it was our car, my mom would have had all those kids in our car and taken us all to school," Thomas said. "It just let me know that there are people that will look at me [and] they won't see a little girl. They will see dark skin and turn away and turn me away."

HE DIED FOR OUR SINS

In his sermon Sunday morning, J.K. Hamilton of Dallas emphasized the equality of believers in the eyes of God.

"There's no such thing as Good, Better or Best in Christ. He died for our sins, all of our sins," said Hamilton, who leads a predominantly Black congregation, Mountain View Church of Christ, in the city's Oak Cliff neighborhood.

"Two patients in an intensive care unit have no business trying to develop a caste system because both of them are sick and need the same remedy. The same remedy. And this is what Jesus provided," he said.

United Voice Worship, a diverse group celebrating "the beauty of diversity through a cappella worship experiences," provided the music.

Earlier in the conference, Anthony Ray Hinton, a former death row inmate who was subsequently exonerated, described how racism had resulted in his incarceration for nearly 30 years in Alabama and the way his faith had sustained him despite the loss of his freedom.

The event also included breakout sessions on "Racial Healing Through Relationships" and on racial reconciliation and "the comfort and costs of segregation in a unity movement."

"I definitely think the Christian church should be integrated, and any church that stands against integration and that has a segregated body is standing against the spirit and the teachings of Jesus Christ, and it fails to be a true witness," King said.

While he favored using the power of government to secure access to public accommodations, King didn't believe the power of the state should be used to stamp out Sunday morning segregation.

"This is something that the Church will have to do itself. I don't think church integration will come through legal processes," he said.

While he led a historically Black congregation in Atlanta, King maintained that all who entered would be welcomed.

"I might say that my church is not a segregating church. It's segregated but not segregating. It would welcome white members," he said.

More than a half-century after King's assassination, most churches remain either predominantly Black or overwhelmingly white, noted Rodney Crownover, a training director at the University of Arkansas at Little Rock and one of the event's white panelists.

"Sunday is still the most segregated day of the week," he told the crowd.

"My friends say 'I don't see color.' I'm sorry. Folks, you see color unless you've got something wrong with your eyesight," he said.

Pleasant Valley's hallways are lined with photos of its members -- Black and white.

One of its goals, displayed prominently on its website, is to attain "30% multi-cultural leadership, membership and staff, representing the neighborhood around us" over the next decade.

Racial reconciliation "is a priority of the Christian faith," Storment said in an interview.

"God loves the whole world, not just your section of the world," he said.

Storment, who is white, was eager to welcome the Agape Conference "because Little Rock has got a history of racial tensions and I'm from here. I'm from Central Arkansas, born and raised, I grew up a racist and part of my conversion story was kind of walking away from that and making amends and repenting," he said.

As a young teenager, he used racist language that he now abhors.

But he attended a church where racism was portrayed as antithetical to the teachings of Christ, as sin.

"The preacher preached about this a lot so when I got baptized when I was 16 years old, I knew that is what it meant. I had to stop doing that stuff," he said.

Officials at Pleasant Valley Church of Christ say they're committed to continue building bridges; they plan to invite the Agape Conference to return to Little Rock in 2022. 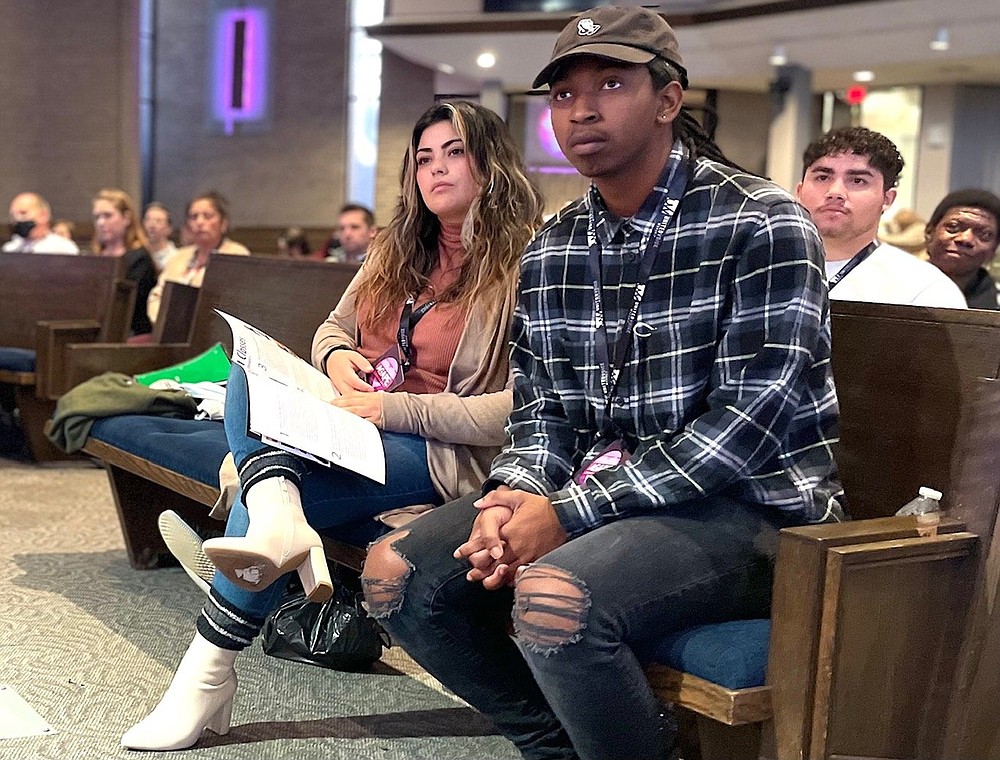 People from across the country gathered over the weekend for the Agape conference, which was held at Pleasant Valley Church of Christ in Little Rock. Black and white speakers portrayed racism as corrosive and contrary to the teachings of Christ, while also portraying diversity as a blessing. (Arkansas Democrat-Gazette/Frank E. Lockwood) 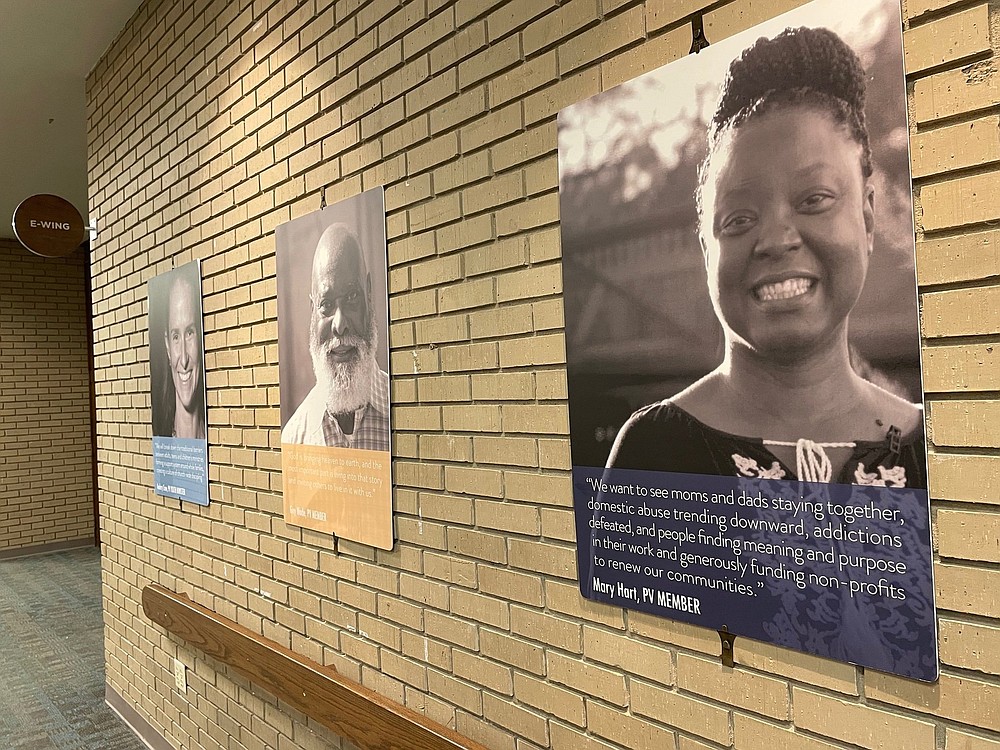 Photographs of members on the walls of Pleasant Valley Church of Christ reflect the congregation’s commitment to diversity. The church’s goal over the next decade is to have “30% multi-cultural leadership, membership and staff, representing the neighborhood” that surrounds it. (Arkansas Democrat-Gazette/Frank E. Lockwood)