Wolves get serious about ending skid 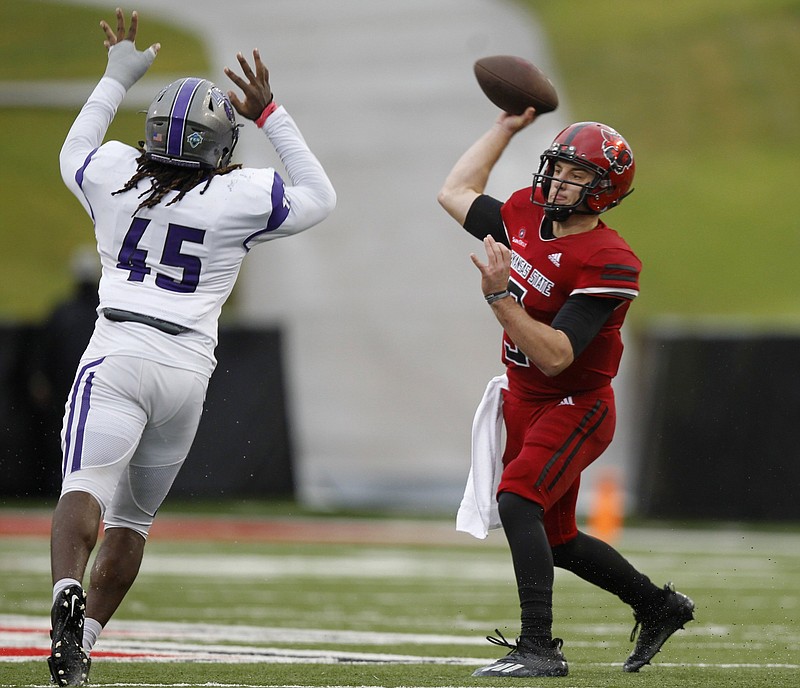 Arkansas State quarterback Layne Hatcher said the Red Wolves (1-8), who are riding an eight-game losing streak, are determined to turn things around. “We came here to win football games and we’re going to do that and we’re going to get on the right track,” he said. (Arkansas Democrat-Gazette/Thomas Metthe)

NOTEWORTHY ULM is a 3-point favorite over ASU. … The Red Wolves have won 11 consecutive games against the Warhawks — ASU’s longest winning streak against any single opponent in school history. … Red Wolves QB Layne Hatcher needs 9 completions to move into fifth place for the most in an ASU career. … ULM will be wearing alternate helmets and uniforms inspired by the Curtiss P-40 Warhawk plane used in World War II as part of its Military Appreciation Day. … ASU has not won a road game since its upset of Kansas State last September.

Nobody around the Arkansas State program is speaking of desperation, so it would be unfair to describe the Red Wolves' current situation as such.

Yet, Coach Butch Jones has made it a constant reminder that football is "a results-oriented business," and given that ASU has now gone two full months without a win, it's hard to imagine it not creeping into some players' minds.

"[Ending that streak] is very important, especially when you have a large group of competitors where everybody wants to win," quarterback Layne Hatcher said. "[Winning] really affects everything but you can't act differently based on circumstances. ... We came here to win football games and we're going to do that and we're going to get on the right track."

The Red Wolves may have their best remaining chance to get back in the win column today when they visit Louisiana-Monroe at Malone Stadium. Although the Warhawks have pulled out some surprising results in the past month, knocking off Liberty and South Alabama at home in back-to-back weeks, ULM is favored by only a field goal and sits four spots below ASU in ESPN's SP+ rankings.

If the Red Wolves are truly determined to capitalize on three seemingly winnable games at the end of an otherwise brutal season, they need to convert growth into results.

"We all know there's a job that needs to be done week to week regardless of the past," kicker Blake Grupe told reporters Tuesday. "You're starting to see some guys changing, you're starting to see [our] style of play. ... We are struggling, but the team has stayed together and we're always looking in the right direction."

ASU's defense hasn't put together a complete game all season, but two of its best single-half showings have come in recent weeks. Louisiana-Lafayette scored only seven points in the first 29 minutes and South Alabama managed just three over the third and fourth quarters.

Those are the Nos. 3 and 4 offenses in Sun Belt. ULM (4-5, 2-4 Sun Belt) ranks dead last, averaging more than 20 yards fewer per game than the next closest team.

It's hard to expect much from the Red Wolf defense. ASU (1-8, 0-5) remains the worst unit in the nation, the only team allowing more than 500 yards of total offense per game.

Ultimately, those same flashes from other teams have cost the Red Wolves. Opponents have had plenty of explosive plays and taken advantage of ASU's mistakes.

The Red Wolves want to be on the other end of things for once.

"It's hard to see success when you're not seeing the results you're measured by," Jones said. "We're working to be better every day and we're gaining ground. Sometimes, you can't see it. But we are."