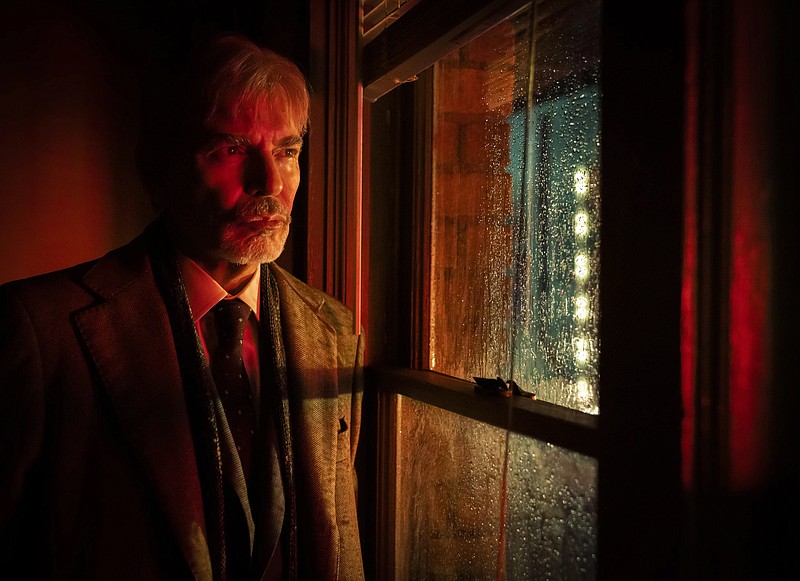 Billy Bob Thornton stars as Billy McBride in the fourth and final season of “Goliath.”

I don't know if I'm prepared to argue that "Goliath," created by David E. Kelley, a former lawyer known for his legal drama/comedies "The Practice," "Ally McBeal," "Boston Public," "Boston Legal" and "Harry's Law," is one of the great television series — my TV watching is selective and idiosyncratic.

I have been known to watch bad shows simply because I'm interested in the show's setting; I watched every second of Netflix's political potboiler "Marseille" — which a French critic once called "an industrial accident ... dung ... to watch it is to suffer" — and a whole lot of Sundance's trashy "Riviera." I have been hooked on several miniseries based on the novels of Harlan Corben, none of which are engaging on an intellectual level.

That's OK; we are free to like (or not like) anything for any reason. The heart wants what it wants and most of us are sophisticated consumers of entertainment products. We are free to respond to whatever knocks, and to disregard whether or not a situation is realistic or plausible or whether reindeer really know how to fly.

"Goliath" is not a realistic depiction of how lawyers work, and the character Billy Bob Thornton plays in the series, maverick attorney Billy McBride, likely does not exist in nature.

McBride is both a charismatic drunk and super-competent litigator, a man with mental demons and a moral code. He has a lot in common with classic noir detectives and Frank Galvin, the alcoholic lawyer Paul Newman played in 1982's "The Verdict."

In the hands of a lesser actor, McBride would be a cliche, and people who aren't intrigued by "Goliath" might dismiss him as such. If you aren't engaged by BBT's naturalistic acting, the character comes off as a trope.

The main reason I watched all four seasons of "Goliath" was because I like Billy Bob. As Bob Dylan said of Gregory Peck, I'd watch him in anything.

And I would guess that a lot of Arkansans watch "Goliath" for the same reason. BBT is our ambassador to Hollywood, the republic of manufactured images. While there are other actors from Arkansas working regularly in film and television (Mary Steenburgen might have a higher profile than Thornton), none seem quite so representative of the Arkansas sensibility.

Holder, who played John Ritter's "special friend" Albert in Thornton's "Sling Blade," plays himself. His fictional self blames Thornton for usurping his spot as the born-in-the-1950s Arkansan meant to be a movie star. It's tongue-in-cheek, but there's a real edge to it: They only need so many of our type.

Thornton's style — if it can be called a style — is so effortless-seeming that it hardly seems like work at all. (Which is the whole trick of it.) What Thornton does is both elegant and psychologically difficult; he doesn't so much build a character from scratch, starting either from the inside out (the American "Method") or from outward accoutrements and details (like classically trained British actors) but simply imagines himself installed in the character. So Billy McBride is Billy Bob Thornton with McBride's experience substituted for Thornton's.

He has Thornton's cadence and rhythms. He has Thornton's equilibrium and instinct for courtliness. Absent conflicting information, he can have Thornton's enthusiasms and history — he can be a St. Louis Cardinals fan, he could have been a promising schoolboy pitcher with a great slider. He acts as Thornton would act if Thornton were McBride.

Maybe this limits an actor's bandwidth; maybe it makes certain roles harder to play, but I don't think so. If Thornton needs to do another kind of accent, he can do it. His range is wide enough — he's played an air traffic controller and a dead-eyed hitman. But unlike, say, Gary Oldman or Tilda Swinton, actors who tend to disappear into their roles, Thornton's always recognizable in his.

Maybe it's because of this that a lot of us feel like we know him. Maybe this is particularly true in Arkansas, where a lot of us have mutual friends with Thornton, or might have crossed paths with him. We might feel that he's like a distant relative that we could, if we needed to, get in touch with him. (No, I will not pass along your screenplay.)

Susan Sontag wasn't the first to acknowledge the joy of "camp" — that "sensibility which revels in artifice, stylization, theatricalization, irony, playfulness, and exaggeration rather than content" — but she codified it in her 1964 essay "Notes on 'Camp.'"

"Goliath" is not what Sontag would describe as "pure camp" — which would be bad art that takes itself so seriously that the audience might perceive it it as hilarious — and it's not self-parodying "camp which knows itself to be camp" either. "Goliath" is glossy legal drama writ large, the sort of thing that John Grisham could knock out in a weekend.

The narrative content of each of its four seasons could probably have been whittled down into a two-hour feature without too much harm. In each season, a few of the characters seem extraneous (like Haley Joel Osment in season four), a few of the plot twists are ludicrous, and the courtroom dialogue is often over-the-top, but it isn't blatantly stupid about the law or the ways in which lawyers and cops and judges relate to one another.

The final season turns on a particularly fine point of law. It begins shortly after the end of season three, which left McBride laying in the dirt parking lot of a bar, having been shotgunned by a legal adversary. It was an ambiguous ending as McBride had been obsessed with his own imminent death throughout the season. A fair interpretation of the scene might have been that McBride had died had Amazon not subsequently ordered a fourth season of the show.

As the fourth season opens, McBride is still recovering from the wound, while his partner Patty (Nina Arianda) has taken a job at the white-shoe San Francisco law firm Margolis & True. Patty brings Billy into the firm after partner Tom True (Elias Koteas) disappears in the midst of a potentially blockbuster case against several pharmaceutical companies responsible for the opioid epidemic. True had a personal stake in the case; his teenage daughter became addicted to and eventually died after overdosing on opioids.

McBride is set up in a Chinatown apartment, not far from an acupuncturist who treats him for pain. Another of the acupuncturist's patients is Samantha Margolis (Jena Malone), the daughter of late Margolis and True founding partner Sam Margolis, who suffers from multiple sclerosis. Sam works at the firm and is worried about its continued survival.

Without going too deep into the weeds, it emerges that Sam hired Patty in order to bring McBride into the firm's case because he'd done some long-ago work for pharmaceutical magnate George Zax (J.K. Simmons), which will eventually require him to recuse himself from the case and prevent him from testifying. Sam means to throw the case in exchange for payoffs from Zax and other Big Pharma concerns at risk to ensure the continued existence of the firm.

It's really complicated, a little too clever, but also gives its audience credit for being able to grasp a nuanced attorney-client privilege, and how that might resurface as an issue decades after an attorney has reviewed a situation (and forgotten all about his role in reviewing it).

The ingenuous solution that McBride comes up with to — no spoiler here — thwart the evil drug companies is ethically dubious but genuinely heroic. And then, after the audience has finally caught up with what's going on, there's another twist that offers redemption to another character. 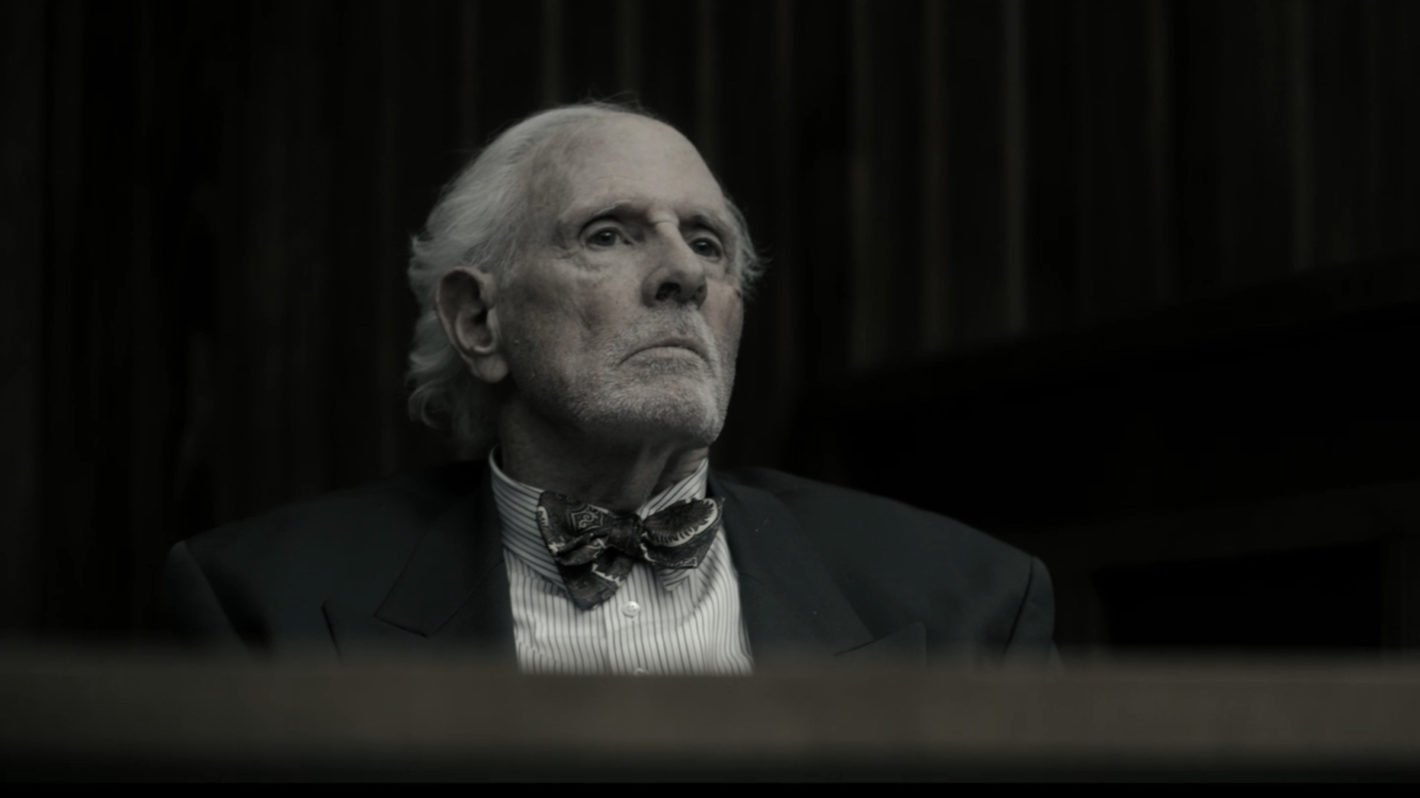 The narrative content of the season may be indefensible as "good TV," but the virtues of "Goliath" are strong. The art direction, the set design, the way the red lights pool in the shadows all make it worth watching. At times the first three seasons are a little too close to David Lynch parody, but the final season is more than a return to form — it is the strongest of the four.

And its treatment of the opioid epidemic, while not far removed from the way it's approached in Hulu's more conventional "Dopesick" and Showtime's "American Rust" or any number of documentary accounts of the epidemic, is highly effective, as it renders the now-familiar saga of the Sackler family into a Shakespearian drama.

Plus it has a loaded cast, with Bruce Dern (who Thornton directed in "All the Pretty Horses") playing Zax's older brother Frank, a tragically brilliant chemist who — like McBride — sometimes has trouble discerning reality.

More plot: In the early '90s Frank had been working on a non-addiction opioid, but couldn't quite get the formula right. His brother George chose to release the addictive form of the drug while claiming it was non-addictive.

But Frank's testimony against his brother is impeached because Frank is broken mentally. He argues that George pushed him out of the company to cover up the fact he knew the drug was addictive; George points to Frank's mental problems and the fact that he was committed soon after being fired as evidence of his unreliability. Whew.

A SHOW OF SUBSTANCE

It's a more poetic way of approaching the opioid problem, but not what makes "Goliath" worth watching. It's a dense show, to be enjoyed as much for certain qualities of risk (it is truly bonkers) as for its genuine merits, which include but are not limited to wonderful actors, sensational production design, and a smart way of calling back to old Hollywood movies like "Rear Window," "All That Jazz" and "High Noon."

Someone once observed that television doesn't require us to think, that it is more like an electronic hearth than a book. It bathes us in its rays, it settles and comforts us before bed. And that is sometimes true, and sometimes it is how we use it.

But it is also a medium that offers casual challenges, and the great thing about the present golden age is that there is so much variety that the adventurous need never be bored by it. The old cliche, as sung by Bruce Springsteen, goes that there are "57 channels and nothing on."

Now the content is oceanic, and there's always strange and crazy, dark and beautiful things to discover. And Billy Bob Thornton, our man in Hollywood, will surface somewhere else. I'd watch him in anything.