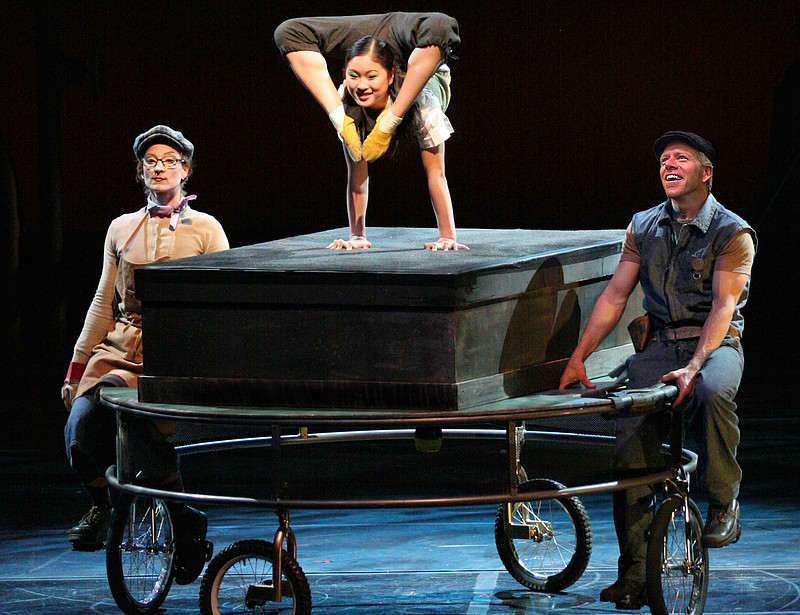 Cirque Mechanics' "Birdhouse Factory" is onstage this week at the University of Central Arkansas' Reynolds Performance Hall in Conway. (Special to the Democrat-Gazette)

Happenings in Arkansas entertainment, events and the arts:

The show focuses on a bird accidentally injured by the main steam boiler in a "widgets" factory circa 1935, where the workers (acrobats, contortionists, unicyclists, trapeze artists, etc.) subsequently are inspired to use their bodies and machines to build birdhouses in a joyful and soulful, though admittedly less efficient, way.

The Tony- and Pulitzer Prize-winning show, loosely based on Giacomo Puccini's opera "La Boheme," focuses on a year in the lives of artists and friends struggling to follow their dreams without selling out. It premiered off-Broadway at New York Theatre Workshop on Feb. 13, 1996, and transferred to Broadway on April 29, 1996.

◼️ "The Heart of Christmas: Songs and Stories of the Season," written and performed by Rob Sutton, an Arkansas native, a graduate of the University of Arkansas and a TheatreSquared alumnus, 7:30 p.m. Tuesday-Friday, 6 and 8 p.m. Saturday, 2 p.m. Sunday, Dec. 11-26 (no performance Christmas Day).

The concert is part of the church's Festival of the Senses. Admission is free. Attendees are requested to wear masks and observe social distancing. Call (501) 753-3578, email baxternan@aol.com or visit stlukeepiscopal.org.

The program includes "Garaje Gato" by Gordon Goodwin, "Pharaoh's Funk" by Erik Sherburne and arrangements of "Artistry in Rhythm" by Stan Kenton, "Besame Mucho" by Consuelo Velazquez, "Theme from 'The Summer of '42' " by Michel Legrand, "Spain" by Chick Corea, "Opus De Funk" by Horace Silver, "The Days of Wine and Roses" by Henry Mancini, "You've Got a Friend in Me" by Randy Newman and "Africa" by David Paich and Jeff Porcaro. Jim Lloyd conducts.

Admission is free; masks are required inside the auditorium. The concert also will be livestreamed at obu.edu/band. Call (870) 245-4197 or email lloydj@obu.edu.

The MacArthur Museum of Arkansas Military History, 503 E. Ninth St., in Little Rock's MacArthur Park, will screen the documentary "D-Day 360" as part of its "Movies at MacArthur" series, 6:30 p.m. Tuesday. The documentary, produced for the 70th anniversary of D-Day, focuses on the invasion of Omaha Beach by the American forces under Gen. Omar Bradley, using raw data gathered through forensic laser scanning, 3D computer modeling and eyewitness accounts. Admission is free. Call (501) 376-4602 or email MacArthur@littlerock.gov.

Tickets — $20-$65 — are on sale for a performance by actress and singer Lea Salonga, who won a Tony Award for her leading role in "Miss Saigon" on Broadway, 7:30 p.m. April 25 at the Center for Humanities and Arts Theater at the University of Arkansas-Pulaski Technical College, 3000 W. Scenic Drive, North Little Rock. Visit uaptc.edu/charts.