Defense keeps Razorbacks in the game until end 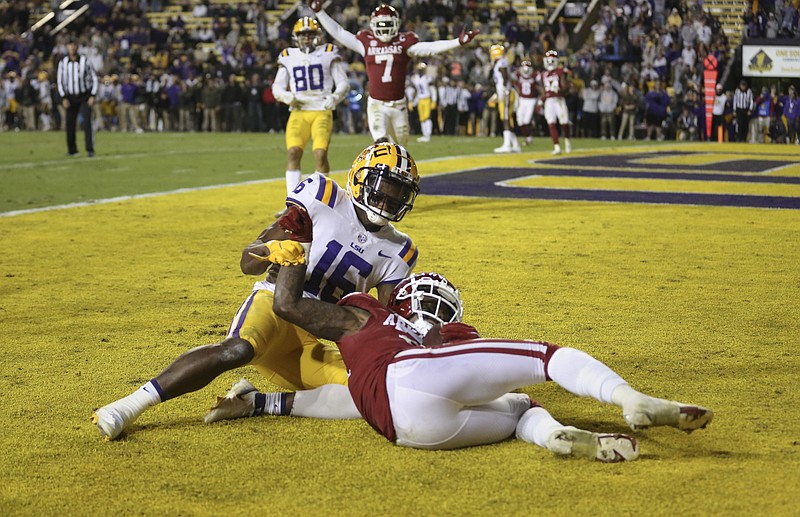 Even with an overtime period, the University of Arkansas held LSU to its few points of the season.

The Razorbacks forced three turnovers -- including cornerback Montaric Brown's interception of a Garrett Nussmeier pass in the end zone in overtime -- as Arkansas beat LSU 16-13 on Saturday night in Tiger Stadium.

The last time the Tigers played at home, they beat Florida 49-42 in regulation.

Arkansas even out-did Alabama in holding LSU down as the Crimson Tide held on to beat the Tigers 20-14 at Bryant-Denny Stadium last week.

The defense kept the Razorbacks in the game and within 10-3 of LSU at halftime after Arkansas was held to 94 yards in total offense in the first half.

"They saved us," Arkansas Coach Sam Pittman said. "They saved the team. And the offense has done that in different games where they've come back and scored.

"But yeah, they played big. LSU was going to run the ball to beat us and they just weren't able to run it well enough to beat us.

"You have to give [defensive coordinator] Barry [Odom] and his staff and them kids a lot of credit."

"It was just great team defense," Brown said. "Stopping the run, stopping the pass. Everybody just doing their job."

LSU had second and 7 from the Arkansas 8 in overtime with the game tied 13-13 when Brown intercepted a Nussmeier pass intended for Devonta Lee.

"Having that mindset that the ball is coming my way all the time," Brown said of getting his fourth interception of the season. "Just trusting my technique.

"That's what I do in practice. It just translates to the game."

LSU drove to the Arkansas 30 in the second quarter when nickel back Greg Brooks recovered a fumbled direct snap to running back Tyrion Davis-Price. The Tigers were at their 41 in the third quarter when safety Myles Slusher -- starting because of Jalen Catalon's season-ending shoulder surgery -- intercepted a Nussmeier pass.

"The defense played lights out," Arkansas quarterback KJ Jefferson said. "They did what they said they were going to do.

"When stuff wasn't going right, [the defensive players] came to me and they were like, 'It's going to happen [for the offense]. Just get it rolling."

LSU targeted Brown on several deep balls, and he was called for pass interference in the first quarter.

"I just love when a team targets me," Brown said. "It gives me more opportunities to make plays.

"As defensive back, you want the ball to come to you. I know I had a PI called in the first quarter. You've just got to have amnesia playing corner and got to have that confidence each play."