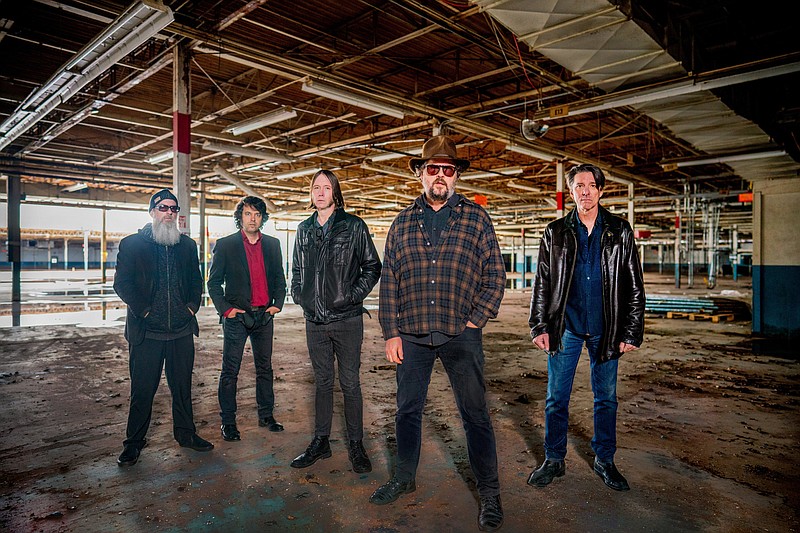 The Drive-By Truckers were gearing up for what looked to be a promising 2020. "The Unraveling," the group's 12th studio album, was released that January and touring had commenced.

And then ... well, yeah. Things unraveled.

"There wasn't really much we could do," Cooley says last month from his home in Birmingham, Ala., where he lives with his wife, Ansley, and their three daughters. "We'd call each other and vent about how frustrating and depressing it was and try to talk each other off the ledge ... It was just try to get through the day and try to find a reason to wake up the next day."

Streaming shows scratched the performance itch a bit and Cooley did some in-person sets with limited-capacity audiences, but it wasn't until this summer that the whole band played together for fans at a July festival in Whitefish, Mont.

"There was a huge crowd," says Cooley in his easy, Alabama drawl. "Everybody was obviously thrilled to be back out and doing things like that again. We ended up doing it with no rehearsal and not even a sound check. It was literally a year and a half off and we walk out onstage in front of a crowd. We had a few little bumps along the way, but it was mostly just like we'd left off."

Touring commenced in August, with more dates in October. The current leg of the trek brings Cooley, 55, and his bandmates to Little Rock on Monday for a show at the Rev Room. Blues singer-songwriter Carl "Buffalo" Nichols will open.

The Truckers request that patrons "be fully vaccinated or show proof of a valid negative covid-19 PCR test taken within the past 48 hours in addition to wearing a mask while at the show."

Of touring and attending shows these days, Cooley says: "There will be some minor inconveniences here and there, but for the most part it's like it was."

Alabama natives Cooley and his pal Hood — the son of Muscle Shoals Rhythm Section bassist David Hood — first teamed up in the band Adam's House Cat before starting the Drive-By Truckers in Athens, Ga., in 1996. Their debut album, "Gangstabilly," was released in 1998, followed by "Pizza Deliverance" the next year. Both were loose, alt-country affairs laced with a literate kind of Southern hu- mor and grit. But it was the ambitious, sprawling "South- ern Rock Opera," released on Sept. 11, 2001, that helped the band find a larger audience.

The concept album featured strong songwriting from Hood and Cooley and tackled subjects like Southern identity, race, rock 'n' roll, Alabama Gov. George Wallace, Lynyrd Skynyrd and more (it was also the first Truckers' record with cover art by Richmond, Va., artist Wes Freed, whose work has been featured on the cover of every subsequent Truckers album except for 2016's "American Band").

Cooley and Hood have been mainstays of the band, with Morgan, who joined after the release of "Pizza Deliverance," being the next longest-tenured member. Singer-songwriter-guitarist Jason Isbell signed on after the release of "Southern Rock Opera" and contributed songs for a memorable run of three albums — "Decoration Day," "Dirty South" and "A Blessing and a Curse" — before leaving in 2007 (he was also married to Shonna Tucker, who played bass in the band from 2003-2011).

After "The Big To-Do," "Go-Go Boots" and "English Oceans," the group dropped the righteously defiant "American Band," which featured some of Hood and Cooley's most politically and socially outspoken lyrics as the Trump era began. Writing about the record, Democrat-Gazette columnist Philip Martin called them "the world's best rock 'n' roll band."

In 2020, the Truckers released two albums that continued to address the troubled American landscape — "The Unraveling" and "The New OK."

"We just had some surplus material left over from 'The Unraveling,' so we used some of that," Cooley says of "The New OK." "Luckily, all of this happened when we had the technology to do some things from home and put it together. It was fun doing that. If I wanted to spend all day just messing around with one part, I could — and I did."

Cooley, Hood and Isbell were also part of "Live at the Shoals Theater," a 2014 show that reunited the three acoustic versions of Truckers' gems. The recording was released as a boxed set in June.

It's just one of several live albums he's been a part of with the band and solo. But for someone who has been at this as long as Cooley has, he admits it's still hard for him to listen to himself onstage.

"Listening to the live recordings, all I hear are the parts that make me cringe," he says with laugh. "But that's why you do it, to hear that and correct if it you can."

Cooley's songs — tracks like "Marry Me," "Zip City," "Cottonseed" and "Ramon Casiano," just to name a few — are an integral part to the band's Mariana Trench-deep catalog. Are there any of his compositions that he doesn't play that often that he'd like to dust off?

"Not necessarily. There are some that I try to reserve for solo shows that I can make a little different, but if there is something I don't play, it's probably because I don't like it anymore."

Being back out in front of crowds and on the road with his band has Cooley understandably happy.

"I'm ready. Actually, we were out long enough this time that I started missing being at home a little bit, and that felt good. I didn't know if I ever would again. I was a little afraid that I'd forgotten how to miss it."