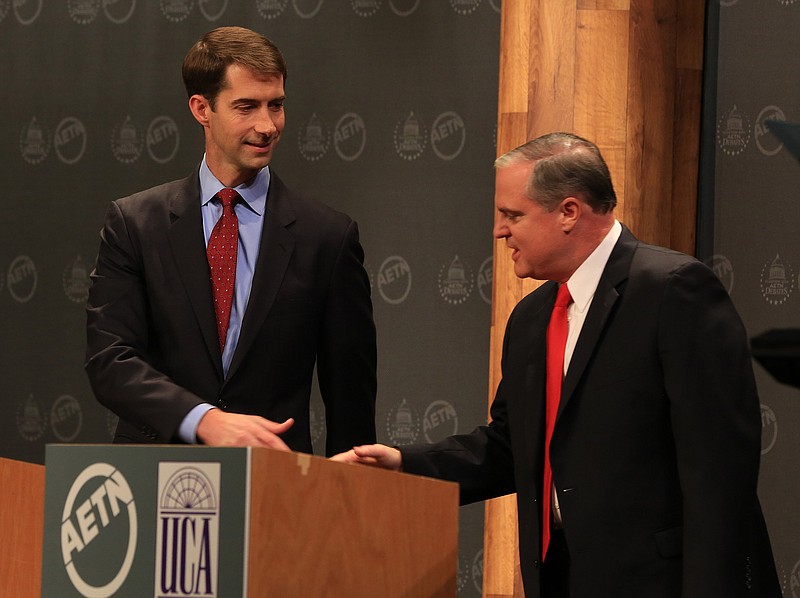 A gun-control group alleges that the National Rifle Association made illegal campaign contributions to U.S. Sen. Tom Cotton years ago as part of a larger scheme using shell companies to support Republican candidates.

The allegation was outlined in a Nov. 2 federal lawsuit from the advocacy group founded by former Democratic U.S. Rep. Gabby Giffords of Arizona, who was shot in the head at a constituent event in 2011.

Cotton, R-Ark., is not listed as a defendant in the lawsuit, and there is no indication in the litigation that he did anything wrong or directly coordinated with the NRA.

The group, named Giffords, is accusing the NRA of channeling up to $35 million in "unreported" and "unlawful" in-kind campaign contributions stretching back years.

Up to $25 million went to the 2016 campaign of former President Donald Trump, according to the lawsuit. The complaint, filed by the Campaign Legal Center Action on behalf of Giffords, argued the NRA violated contribution limits and disclosure requirements under the Federal Election Campaign Act.

In-kind contributions are services or goods that help a campaign, such as providing office items or sponsoring a fundraiser.

An NRA affiliate dished out $1.6 million to Starboard Strategic Inc. for expenditures "supporting Cotton or opposing his opponent" in the 2014 election cycle, according to the lawsuit. It describes Starboard as "functionally indistinguishable" from a political consulting firm being paid by Cotton's campaign committee.

Cotton's team spent $5.3 million on polling and media services from the consulting firm, which is named OnMessage, the lawsuit alleges.

"[OnMessage and Starboard] are led by the same people and located at the same address, and no internal separation or firewall exists between the staff who work for each entity," the lawsuit argues.

When a political committee hires the same company used by a candidate in certain situations, the payments must be recorded as in-kind contributions, which are subject to spending limits, the nonprofit argues in the suit.

The NRA did not respond to a request for comment from the Arkansas Democrat-Gazette last week. In a statement to The Washington Post, the group said the litigation is "as misguided as it is transparent."

OnMessage, which is not listed as a defendant in the litigation, did not respond to a request for comment from the Democrat-Gazette.

Neil Reiff, a campaign-finance lawyer, said it's a best practice for candidates to make sure media vendors have a firewall policy that separates employees working with outside groups and individuals working for candidates.

David Pucino, a senior staff attorney with the nonprofit's sister organization, the Giffords Law Center, issued a statement saying the litigation is aimed at holding the NRA accountable "for actions that corrupted politicians and undermined our democracy."

"The NRA has long acted like it is above the law, and it has done so flagrantly in the last several election cycles," he said in a statement, arguing that the litigation shows that the NRA "broke the law."

A federal court found that the gun-control group could sue the NRA after the Federal Election Commission did not act on complaints from Giffords.

"The FEC had the chance to do its job by taking action against the NRA for this massive coordination scheme,"said Molly Danahy, senior legal counsel for litigation at Campaign Legal Center Action, in a statement. "But as usual, the FEC failed to enforce the law."