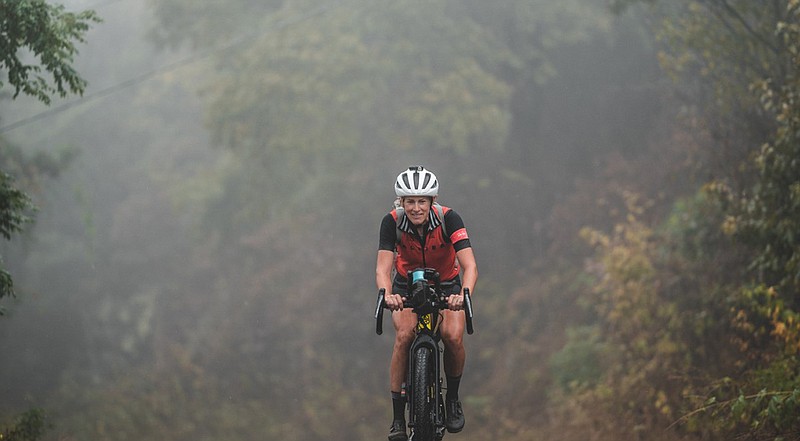 Scotti Lechuga was sitting in the Oark General Store and anxiously waiting her order when the familiar chime of her phone sounded. She had been bicycling over muddy gravel roads in the cold, pouring rain for the past eight hours. She was more interested in warm food than an incoming text.

A tall stack of pancakes, eggs, bacon, toast and coffee, or pretty much one of everything on the menu, was being spread across the table in front of her.

Yes, it had been a long and tiring ride. An equally draining ride lay ahead before her day was over. Her hope was this bounty of calories would help her continue cranking out mileage to the finish.

Chewing on a strip of bacon and cutting into a pancake, she pulled the phone from her vest pocket and then slipped it from its water-tight pouch. The text was from her husband, Ernie.

"Congratulations! You're the new leader of the Arkansaw High Country Race!"

The race uses the Arkansas High Country Route, a 1,200-mile bicycling adventure on a mix of gravel and paved rural roads that add up to more than 80,000 feet of climbing. Tracking through the Buffalo National River corridor, Arkansas River Valley, the Ozark and Ouachita mountain ranges, it has become a popular bike-packing tour for cyclists from across the nation.

Chuck Campbell of Russellville conceived the idea for the route in 2015. While perusing the catalog of bicycle touring maps produced by the Adventure Cycling Association, he spotted a gaping hole where there were no routes. To his surprise, this void turned out to be Arkansas.

Campbell contacted the association about creating a route in the state. They asked him to mark his proposed course on a highway map for them to review. Impressed by the plan, Adventure Cycling then posted the route on its blog, to gauge prospective interest. The response was explosive.

One of those whose interest was piqued was Gary Vernon, program officer with the Walton Family Foundation. The foundation gave a $100,000 grant to the Arkansas Parks and Recreation Foundation to map the route and make it a reality.

The gap in Adventure Cycling's maps has been filled. The association now publishes waterproof maps for the route, GPX digital packages, and it offers tours, too (see arkansasonline.com/1115route.)

Cyclists being cyclists, it wasn't long before they began traveling from across the country to Arkansas on a quest to own "best known time" bragging rights. In 2019, the first Arkansaw High Country Race began and ended at Little Rock; this time, racers set out Oct. 9 from Fayetteville. In 2022 and 2023, the race will be staged at Hot Springs (see arkansasonline.com/1115HS).

THE ROUTE TO VICTORY

Lechuga, born in North Carolina, has been athletic throughout her life, running track and cross-country in high school. Running got her a scholarship to Baylor University in Waco, Texas. After many injuries running at the university, she left the program to pursue an art interest.

In 2008, realizing she missed sports, she climbed on an old bicycle she pulled from a garage corner.

When road cycling proved less damaging to her body than running had been, she upped her training to crank out mega mileage. The high mileage and rugged conditions took their toll on her cheap hybrid bike.

Dealing with near-constant repairs, she became a regular at Chainwheel in Little Rock. She met a friendly mechanic at the bike shop named Ernie, who began providing cycling advice and eventually became her husband.

Ernie grew up on a bike, racing professionally for teams such as Defeet and Jelly Belly. He finished his professional cycling in 2004 and went to work for Orbea, headquartered at the time in North Little Rock.

After their twins, Eli and Ethan, were born in 2011, he helped Scotti enter the world of professional road-bike racing, including several years of competitions in Europe. The pair now enjoy racing ultra-off-road endurance competitions. In 2019, for instance, they won the pairs division in a 1,056-mile slog through mountainous Kyrgyzstan in central Asia.

They competed in two earlier High Country Race events as a pair, setting best known times (BKT) in the category each time. In 2021 they decided to compete solo.

Racing solo was a new experience for Scotti. She had to support herself. No sag vehicle. No food/gear/water caches. However, racers are allowed to use services available to everyone, such as bike repair shops, lodging and restaurants.

BACK TO THE RACE

The High Country Race attracts amateur and professional endurance bicyclists from across the country, with racers traveling from as far away as Connecticut. Lechuga's goals were to push her limits and finish the race, with no thoughts of winning.

During the early stages, she swapped the lead position with two male competitors. As the days passed, she settled into a solid third position. She realized the guys ahead of her were stronger than she was, but she believes in the staying power women possess.

For her, the race came down to making decisions that would prepare her to finish strong. She was always in the moment of problem-solving, thinking two steps ahead to prepare for the coming obstacles and what to do to set herself up for success.

This strategy paid off on the final night of her race. Seeing an approaching storm, she elected to sleep four hours in a Russellville motel, avoiding the worst of the lightning. Refreshed by her longest break of the race, she was better prepared to tackle the harsh, wet conditions left behind by the storm.

When Josh Allen of Rogers scratched from the race on Day 4 due to serious saddle sores, Lechuga moved up to second place. During that big breakfast in Oark, Ernie's text informed her that Spencer Ralston of Hebron, Conn., had scratched because of mechanical trouble and the fear of being struck by lightning. Lechuga found herself leading the race with only 80 miles remaining.

But she had competed in enough ultra-endurance events to know the victory was far from guaranteed. There had been 17 straight hours of rain. The climb over White Rock Mountain still lay ahead. Those rain-soaked gravel roads would smear like peanut butter, sucking onto her tires with each stroke. Also, her equipment and body were worn down.

She pushed on, though, and after five days, 10 hours and 49 minutes, she was the first racer to ride up the final hill and onto the historic downtown Fayetteville Square. She finished almost two days faster than the earlier BKT, set in 2020 by Ashley Carelock (see arkansasonline.com/1115win).

In addition to their racing, the Lechugas in February opened Natural State Rock & Republic, in the historic Magnolia Garden estate at 500 N. Main St. in Springdale. They offer cycling retreats, overnight stays, tours and cycling clinics. The 10-bedroom house includes an Arkansas Artists Gallery, too.

NOT JUST FOR RACING

The Arkansas High Country Route is not just for ultra-endurance racers. Using three interlocking loops to connect many of Arkansas' most scenic natural areas, it is well suited for most cyclists to tailor their own outdoor adventure.

Recently, I invited several cycling buds to join me on a five-day tour I mapped out on the route's Central Loop. It took us through the Ozark Mountains and the Buffalo National River area.

Adventure Cycling's hard-copy map is a great introduction to the route, illustrating the course and including turn-by-turn directions, as well as pointing out towns, camping, lodging, food, bike shops and other points of interest.

As we pedaled along our adventure, the association's GPX Data app proved more helpful. It provides the features mentioned above and your navigation location as you progress along the route. All a rider must do is follow the blue navigation dot.

At the onset of our ride, we began the first of many long, unceasing, mouth-drooling climbs that all cyclists have endured while ascending steep mountainsides on chilly mornings.

High Country is a very hilly route. It seems like you are always ascending or descending. I constantly reminded myself that as soon as I reached the top, the elevation would reward me with panoramic views of surrounding hollows and distant mountain tops.

As we pedaled along a gravel road north of Hagarville, we noticed a point of interest on the map that deserved checking out. We peered up the mountainside through colorful autumn foliage, and viewed a towering rock formation known as The Arkansas Sphinx. Just stunning.

At the end of a 50-plus mile day, and more than 5,200 feet of elevation, our weary group pedaled up to the Oark General Store for a well-deserved thick, juicy burger, french fries and a craft beer.

With our support vehicle hauling our gear, we continued another five miles up Arbaugh Mountain Road. We pitched our tents in an inviting clearing, lounged around a warm campfire and enjoyed more adult beverages while sharing experiences of the first day of our Arkansas High Country Route adventure.

Each day offered one-of-a-kind experiences. We stopped to enjoy a hike to Hawksbill Crag, rode past a string of beautiful waterfalls along Falling Water Road in the Richland Creek Wilderness Area and saw many more scenic natural wonders.

At the end of our daily rides, we rewarded ourselves with a hearty meal to fuel the coming day of riding. Then gathering around a roaring campfire with adult beverages, we reflected on the day's adventures.

Great memories. Once again, I was thankful to be living in The Natural State.