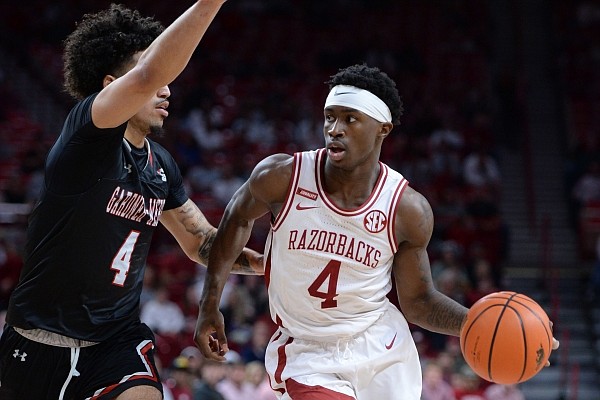 Arkansas guard Davonte Davis drives to the lane on Saturday, Nov. 13, 2021, as he is pressured by Gardner-Webb guard D’Maurian Williams during the second half of the Razorbacks’ 86-69 win in Bud Walton Arena.

FAYETTEVILLE -- The University of Arkansas basketball team finally played a game with more assists than turnovers -- and it wasn't close.

The game or the No. 16 Razorbacks' assist-to-turnover ratio.

Arkansas beat Gardner-Webb 86-69 Saturday in Walton Arena after building a 31-point lead in the second half, and the Razorbacks finished with 23 assists and nine turnovers.

In sweeping exhibition games against East Central (Okla.) University 77-74 and North Texas 68-60 and beating Mercer 74-61 in the season opener, Arkansas combined for 32 assists and 35 turnovers.

With the loss of Jalen Tate, who as a senior last season led the Razorbacks with 123 assists, Musselman appears to have found his new point guard in Davis.

"If we're going to be good, we need Devo to be good," Musselman said. "Plain and simple.

"I know Coach Muss has been talking about needing a point guard, so I'm just going to continue to evolve and continue to get better at the point guard position," Davis said. "I didn't play there much last year, so it's just about becoming a true point guard to get everyone involved so it can help the team out."

Three of Davis' assists came on baskets by junior forward Connor Vanover, who hit 7 of 12 shots and led Arkansas with 19 points.

"I expect him to have a lot of assists every night," Vanover said. "He has really good vision, can see everybody on the court. He knows how to make really good passes and finds people."

"There's probably not a 4- or 5-man in all of college basketball that has 10 assists through two games," Musselman said. "He's been absolutely incredible playing through him."

According to the NCAA stats, Williams is the only player as tall as 6-10 who has 10 assists in two games. Vanderbilt 6-10 senior Quentin Millora-Brown also is averaging 5.0 assists, but in one game when the Commodores beat Alabama State 91-72.

Razorbacks guard Stanley Umude and forward Trey Wade, both senior graduate transfers, each had three assists against Gardner-Webb as did sophomore Khalen Robinson.

Better passing and hustle helped the Razorbacks hit 13 of 27 three-pointers, including 4 of 7 by senior guard JD Notae and 2 of 3 by Davis. Notae scored 18 points and Davis 10.

"I thought our spacing was better," Musselman said. "We addressed trying to run harder.

"Every team says they want to fast break, but it's really hard. Like, it's hard to score 86 points. You've got to run."

Davis had two turnovers and Notae didn't have any.