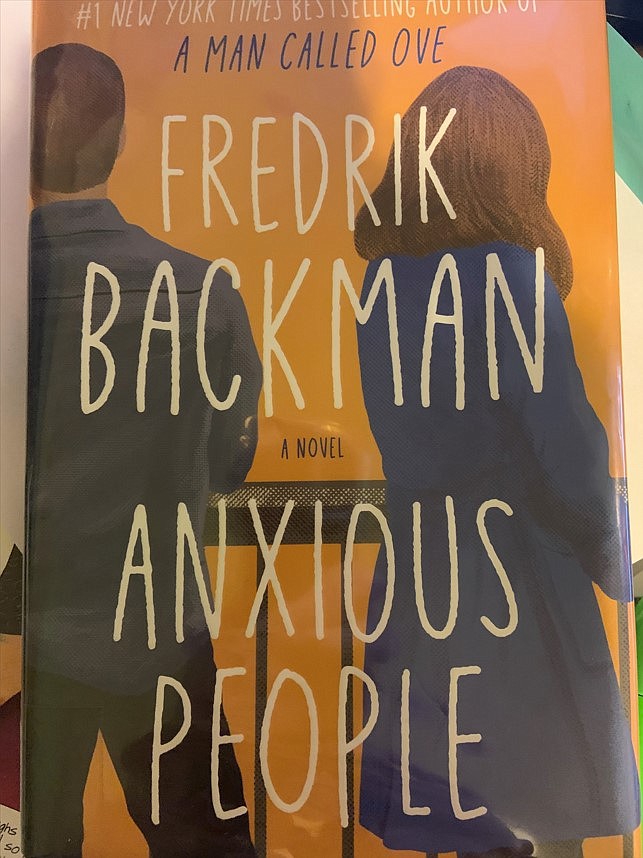 Anxious People by Fredrik Backman was our online book club book for November.  I loved his book A Man Called Ove, and enjoyed a couple of others, so I was prepared to love this book. It did not start out promising.  I absolutely loathed the first 150 or so pages.   I thought it was slapstick for literature—it fell flat for me.  Ultimately, the book basically states that people are complicated and how they act is based on their life experiences and circumstances.  It examines the cause and effect of life in general and covers some pretty deep issues, from depression, to suicide, homosexuality, father and son relationships, addiction, cancer, grief and of course anxiety.  The beginning of the book made me anxious with all the chaos.

I admit that I love a more linear read and want to get engrossed in a good story line with characters I like, if not love.   In the beginning, I pretty much despised all of the characters.  At the end, I understood them all but in reality, only liked one or two. I thought the best character was the young policeman.  One of our book club members thought the title should have been Guilty People, since almost all of the characters were suffering from guilt as much as anxiety.

Once again, we had a divided group.

One member really disliked the book, two liked it, one didn’t have it finished yet, but liked it so far, and then there was me—I would have ranked the beginning a 1 and the ending almost a 5.  If this had not been a book club book, I am not sure I would have soldiered on and finished it, and that would have been a mistake, because I am glad, I did.

Backman has lots of great quotes throughout the book and I started writing down the ones that I liked.  Here are just a few:  Loneliness is like starvation; you don’t realize how hungry you are until you begin to eat.

Humor is the souls last line of defense, as long as we are laughing, we are alive.

We liked the same voices in the same way.  (This referred to liking the same books)

The lowest rating was a 1.5 but overall it came in at 3.4 from all 5 of us.  It generated a lot of discussion.  Just like in life and these characters, our personal experiences and filters determine what we like and don't like in books.

Spoiler alert (so read no further if you haven’t read it and plan to):  I had no idea the bank robber was a woman.  Surprisingly enough for me, I had more sympathy for the bank robber as a man than as a woman.  I thought the man had been kicked out of his house to protect his wife and children, then lost his job.  For a mother to leave without fighting for her rights was worse (sexist on my part?!).  I thought the bank robber was a weak character and not very bright.  But then, the narrator told us at the beginning that the whole book was about idiots---another thing I didn’t like.  I don’t want the narrator or book to tell me what to think.  I did not like the third person narration either.