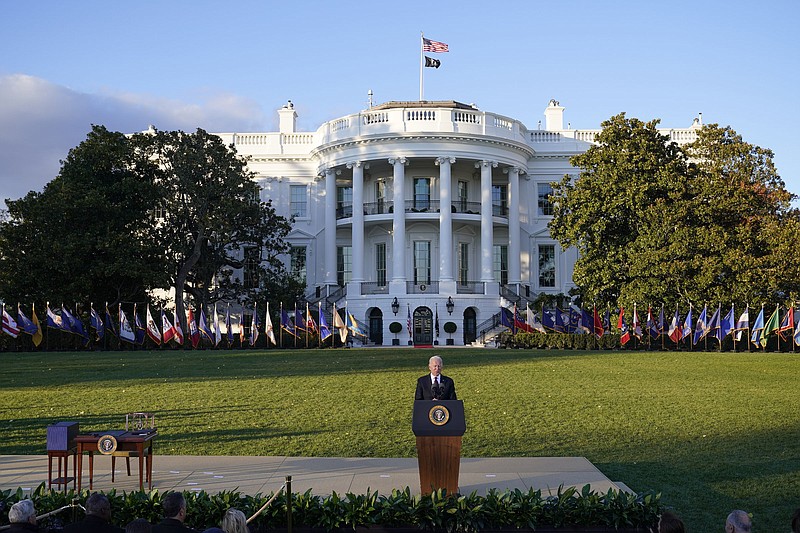 President Joe Biden speaks before signing the $1.2 trillion bipartisan infrastructure bill into law during a ceremony on the South Lawn of the White House in Washington, Monday, Nov. 15, 2021. (AP Photo/Susan Walsh)

Republicans and Democrats gathered at the White House as Biden signed the legislation, which is aimed at improving the country's roads, bridges, pipes, ports and internet connections.

"This is what can happen when Republicans and Democrats decide we're going to work together to get something done," Portman said.

Harris said the infrastructure push "will be a nationwide effort, the likes of which we have not seen in a generation." She also urged lawmakers to pass the Build Back Better plan, a second package that aims to overhaul the country's health care, education, immigration, climate and tax laws. The House is expected to take up the measure this week.

[Video not showing up above? Click here to watch » arkansasonline.com/1116deal/]

Several Republicans -- including Sens. Shelley Moore Capito of West Virginia, Bill Cassidy of Louisiana and Mitt Romney of Utah, and Rep. Tom Reed of New York -- were also in attendance.

The mood at the ceremony on the White House lawn was celebratory, with members of Congress expressing gratitude for the cooperation of those across the aisle -- a rare occurrence.

Biden, who has often spoken longingly about the days of compromise and consensus, seemed in good spirits as he touted the benefits of the new law and the bipartisan manner in which it was achieved -- with no mention of the vitriol that Trump and his supporters have lodged at the Republicans who voted for the infrastructure bill.

At one point, Biden praised Portman as a "hell of a good guy," then quipped: "I'm not hurting you, Rob, because I know you're not running again."

Within moments of the signing, Republicans and Democrats issued news releases detailing the projects that will be built in their home states and districts.

The Senate first passed the infrastructure bill in August with a 69-30 vote, the rare type of partnership Biden committed to in the 2020 campaign. The measure languished in the House for months, though, as liberal lawmakers sought to use their leverage to advance Biden's larger climate and social spending bill.

The bill finally passed the House earlier this month on a 228-206 vote, with 13 Republicans joining with most Democrats in voting yes.

Some supporters of the measure, such as New York Gov. Kathy Hochul, a Democrat, traveled to Washington for the event. The signing also included governors and mayors of both parties and labor and business leaders.

"With Arkansas set to receive $4B, the deal will greatly improve Little Rock's streets, public transit, and port," Scott wrote.

He later shared images from the White House event in a separate post, writing, "This deal is monumental for Little Rock and Arkansas. It'll provide our state $4B in unprecedented investments in our infrastructure."

Scott had been scheduled to appear Monday alongside federal and local officials at Stephens Elementary School in Little Rock as part of a White House tour of communities nationwide. His spokeswoman, Stephanie Jackson, told reporters at the news conference that Scott had been invited to the White House event.

"He sends his regrets, of course, but is thrilled to represent our city in the nation's capital as Little Rock stands to receive tens of millions of dollars for roads, bridges, broadband -- which is even a need here in Little Rock -- and so much more, of course," Jackson said.

Several House Republicans who backed the legislation have been threatened and harassed.

Senate Minority Leader Mitch McConnell, R-Ky., who voted for the bill and drew Trump's wrath, has even tried to give more credit to his Senate caucus for helping pass the package.

McConnell said the country "desperately needs" the new infrastructure money, but he skipped Monday's signing ceremony, telling WHAS radio in Louisville, Ky., that he had "other things" to do.

Prospects are tougher for further bipartisanship ahead of the 2022 midterm elections as Biden pivots back to more difficult negotiations over his broader $1.75 trillion social spending package.

[Video not showing up above? Click here to watch » arkansasonline.com/1116inequity/]

The president hopes to use the infrastructure law to build back his popularity, which has taken a hit amid rising inflation and the inability to fully shake the public health and economic risks from covid-19.

Biden also tried unsuccessfully to tie the infrastructure package to passage of a broader package of $1.75 trillion in proposed spending on families, health care and a shift to renewable energy that could help address climate change. That measure has yet to gain sufficient support from the narrow Democratic majorities in the Senate and House.

"My message to the American people is this: America is moving again and your life is going to change for the better," he said.

With the bipartisan deal, the president had to choose between his promise of fostering national unity and a commitment to transformative change. The final measure whittled down much of his initial vision for infrastructure. Yet, the administration hopes to sell the new law as a success that bridged partisan divides and will elevate the country with clean drinking water, high-speed internet and a shift away from fossil fuels.

Biden will get outside Washington to sell the plan more broadly in coming days.

He intends go to New Hampshire today to visit a bridge on the state's "red list" for repair, and he will go to Detroit on Wednesday for a stop at General Motors' electric vehicle assembly plant, while other officials also fan out across the country. The president went to the Port of Baltimore last week to highlight how investments from the law could limit inflation and strengthen supply chains, a key concern of voters who are dealing with higher prices.

"We see this as is an opportunity because we know that the president's agenda is quite popular," White House press secretary Jen Psaki said Monday before the signing. The outreach to voters can move "beyond the legislative process to talk about how this is going to help them. And we're hoping that's going to have an impact."

Biden continues to work to appease Democratic skeptics of the broader package, such as Sen. Joe Manchin of West Virginia, while also holding on to the most liberal branches of his party. Pelosi said in remarks at the Monday bill signing that the separate package will pass "hopefully this week."

Texas Sen. Ted Cruz expressed concern during a Fox News interview Sunday that Republican support for the infrastructure law could ultimately lead Democrats to rally and back the second package.

"They gave Joe Biden a political win," Cruz said of his fellow Republicans. "He will now go across the country touting, look at this big bipartisan win. And that additional momentum, unfortunately, makes it more likely that they whip their Democrats into shape and pass some multitrillion-dollar spending bill on top of this."

The haggling over infrastructure has shown that Biden can still bring together Democrats and Republicans, even as tensions continue to mount over the Jan. 6 assault on the U.S. Capitol by supporters of Trump. Yet the result is a product that might not meet the existential threat of climate change or the transformative legacy of President Franklin D. Roosevelt, whose portrait hangs in Biden's Oval Office.

"Yes, the Infrastructure Investment and Jobs Act is a big deal," said Peter Norton, a history professor in the University of Virginia's engineering department. "But the bill is not transformational, because most of it is more of the same."

Norton compared the limited action on climate change to the start of World War II, when Roosevelt and Congress reoriented the entire U.S. economy after the attack on Pearl Harbor. Within two months, there was a ban on auto production. Dealerships had no new cars to sell for four years as factories focused on weapons and war materiel. To conserve fuel consumption, a national speed limit of 35 mph was introduced.

Information for this article was contributed by Felicia Sonmez, Amy B. Wang, Mariana Alfaro, Jeff Stein and John Wagner of The Washington Post; by Josh Boak and Colleen Long of The Associated Press; and by Joseph Flaherty of the Arkansas Democrat-Gazette. 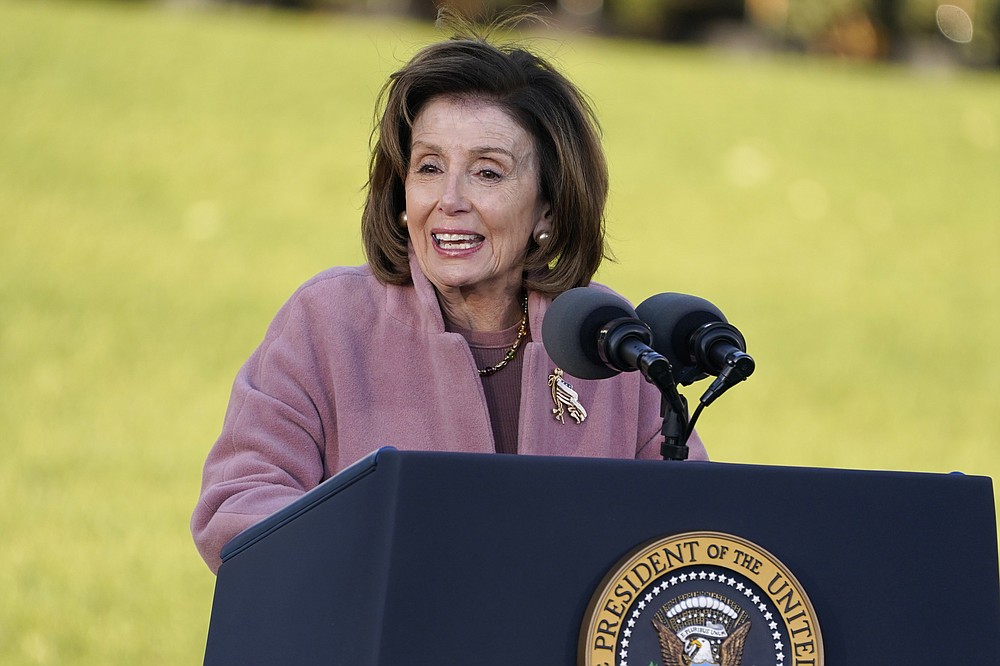