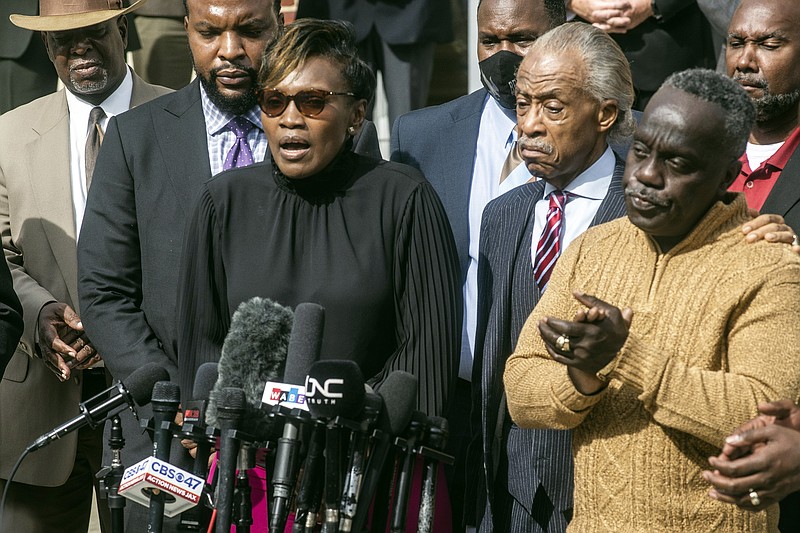 Marcus Arbery, right, applauds as his former wife Wanda Cooper speaks about the slaying of their son Ahmaud Arbery as Civil rights leader Rev. Al Sharpton stands between them outside the Glynn County courthouse, Wednesday, Nov. 10, 2021, in Brunswick, Ga. Rev. Sharpton led a prayer and spoke out against injustice during the noon break in the trial of three men charged with murder in Ahmaud Abery's shooting death. (Terry Dickson/The Brunswick News via AP)

BRUNSWICK, Ga. -- A judge denied mistrial requests Monday at the trial of three white men charged with murdering Ahmaud Arbery after defense attorneys claimed jurors were tainted by weeping from the gallery where the slain Black man's parents sat with the Rev. Jesse Jackson.

The morning's testimony was largely disrupted by arguments outside the jury's presence over Jackson's appearance. The judge said he found one defense lawyer's complaints last week about Black pastors to be "reprehensible" and no group would be excluded from his courtroom.

Father and son Greg and Travis McMichael armed themselves on Feb. 23, 2020, and pursued the 25-year-old in a pickup after spotting him running in their neighborhood. Their neighbor, William "Roddie" Bryan, joined the chase and took cellphone video of Travis McMichael shooting Arbery three times with a shotgun.

Tensions flared in the courtroom Monday morning soon after Jackson sat in the back row of the courtroom between Arbery's parents. Defense attorney for Bryan Kevin Gough asked the judge to make the civil-rights leader leave to avoid unfairly influencing the jury.

"There is no reason for these prominent icons in the civil-rights movement to be here," Gough said Monday. "With all due respect, I would suggest, whether intended or not, that inevitably a juror is going to be influenced by their presence in the courtroom."

Superior Court Judge Timothy Walmsley declined the request. Courtrooms are generally open to the public, although the judge has limited seating in the public gallery because of the coronavirus pandemic.

"The court is not going to single out any particular individual or group of individuals as not being allowed into his courtroom as a member of the public," Walmsley said. "If there is a disruption, you're welcome to call that to my attention."

Jackson told reporters outside the courthouse that he came to coastal Brunswick to support justice for Arbery's family, not in response to the attorney's previous remarks about Black pastors. He acknowledged that Arbery's mother wept "very quietly" in the courtroom after prosecutors showed a photo of her son to a witness.

"As the judge said, it was my constitutional right to be there," Jackson said. "It's my moral obligation to be there."

Gough's mistrial request was joined by the two other defense teams. Franklin Hogue, an attorney for Greg McMichael, said he fears the defendants aren't receiving a fair trial in the community.

Jason Sheffield, one of Travis McMichaels' attorneys, said the weeping caused some jurors to look and see Jackson, an icon "whose autographed picture hung in my mother's law office for decades."

"Several jurors did look over. Their faces changed, [showing] the emotion and sympathy they felt," Sheffield told the judge.

Walmsley warned the attorneys their own statements may have lured some high-profile figures to the courthouse.

"I will say that is directly in response, Mr. Gough, to statements you made, which I find reprehensible," the judge said.

Bryan and the McMichaels are charged with murder and other crimes. Prosecutors say they chased Arbery for five minutes to keep him from exiting the Satilla Shores subdivision outside the port city of Brunswick.

The chase ended when Arbery, trailed by Bryan's truck, tried to run around the McMichaels' truck as it idled in the road ahead. The video shows Travis McMichael confronting Arbery and then shooting him as he throws punches and grapples for the gun.

The McMichaels told police they suspected Arbery was a burglar after security cameras recorded him several times inside a home under construction, five houses away. Defense attorneys say Travis McMichael opened fire in self-defense.

On the witness stand Monday afternoon, a Georgia Bureau of Investigation firearms examiner testified that Arbery's T-shirt had large holes with singed edges suggesting the shotgun barrel was either pressed against him or almost touching when it was fired into his chest and armpit.

Robert Rubin, an attorney for Travis McMichael, asked firearms examiner Brian Leppard whether that meant the gun was within arm's length of Arbery.

"I think it's reasonable to say that, if the end of the shotgun can touch your shirt, if you were the victim then you could grab the shotgun," Leppard replied.

Information for this article was contributed by Kate Brumback of The Associated Press. 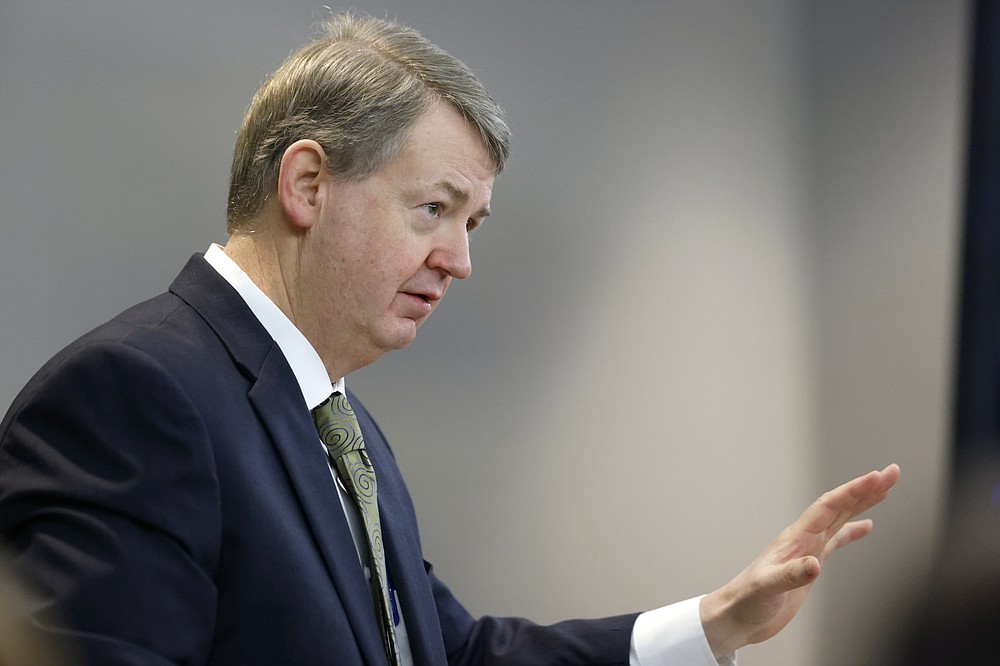 Defense attorney Kevin Gough speaks during opening statements in the trial of Greg McMichael and his son, Travis McMichael, and a neighbor, William &amp;quot;Roddie&amp;quot; Bryan, at the Glynn County Courthouse, Friday, Nov. 5, 2021, in Brunswick, Ga. The three are charged with the February 2020 slaying of 25-year-old Ahmaud Arbery. (Octavio Jones/Pool Photo via AP)
ADVERTISEMENT