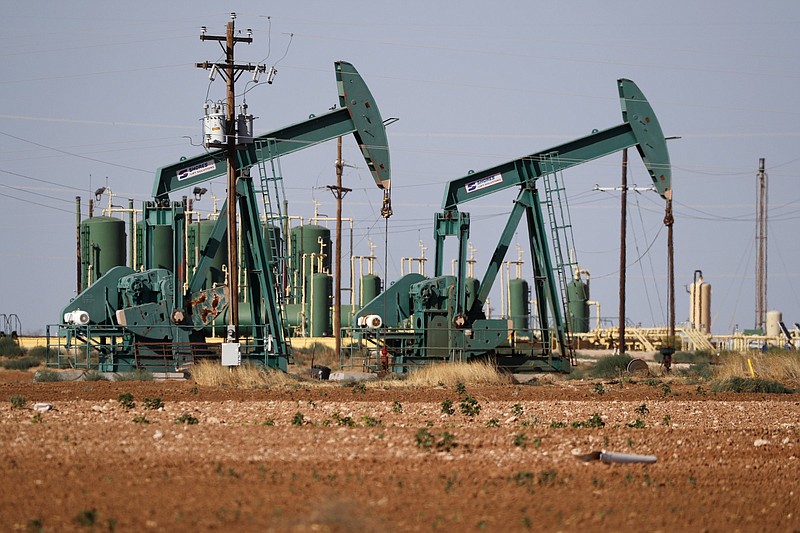 FILE - In this Wednesday, July 29, 2020 file photo, a view of a pump jack operateing in an oil field in Midland, Texas. A U.N.-backed study has found that the world needs to cut by more than half its production of coal, oil and gas in the coming decade to maintain a chance of keeping global warming from reaching dangerous levels. The report published Wednesday, Oct. 20, 2021 by the U.N. Environment Program noted that many governments have made ambitious pledges to curb greenhouse gas emissions. But it found they are still planning to extract double the amount of fossil fuels in 2030than what would be consistent withthe goal of keeping global temperature rise below 1.5 degrees Celsius (2.7 degrees Fahrenheit). AP Photo/Tony Gutierrez, File)(

Senate Majority Leader Charles Schumer, D-N.Y., urged Biden over the weekend to release oil from the nation's emergency reserves, saying consumers needed immediate relief at the gas pump. Energy Secretary Jennifer Granholm told CNN that the president is evaluating the tools he has available, including a release from the Strategic Petroleum Reserve.

U.S. retail gasoline prices Monday averaged $$3.42 a gallon, just 2 cents shy of the record set in 2012, according to AAA data. Prices averaged $2.126 a year ago. Wholesale gasoline for December delivery rose 2 cents Monday to $2.33 a gallon.

However, a release from the strategic reserves would be only a short-term solution and possibly worsen the problem, said Phil Flynn, senior market analyst at Price Futures Group.

"When you release oil to lower prices, it doesn't solve the underlying problem, which is demand is growing faster than supply," said Flynn.

As the U.S. considers a crude-supply release, Saudi Arabia and the United Arab Emirates signaled that OPEC Plus will continue to be cautious in its plans to raise output. The group has been adding 400,000 barrels a day of production each month on paper, although its members have failed to pump that much in practice so far. The modest release comes as oil has surged to multiyear highs as economic recovery and a global energy crisis have fueled demand.

The Organization of the Petroleum Exporting Countries and its allies are particularly wary about the stability of demand in the coming months. Already in Europe, a handful of smaller consuming nations have reimposed restrictions as a result of covid-19 cases. Biden was also meeting virtually with President Xi Jinping of China, the world's largest oil importer, on Monday.

The Biden administration's deliberations to release oil from the reserve comes as gasoline prices have hit a seven-year high, a political problem for Democrats who are experiencing sinking approval ratings. Even climate-conscious Democratic senators urged the president to act quickly to dampen prices by either tapping the reserve or banning U.S. crude exports. Similarly to a reserve from the reserve, a U.S. oil export ban could do little to provide immediate relief to American drivers while upending global markets.

Oil refineries on the Gulf Coast have restarted after being shut down in August by Hurricane Ida. That recovery was "earlier than expected," Farzin Mou, vice president of Enverus Intelligence Research, said in a note. That could ease pressure on gasoline prices, but the underlying cost of crude oil should remain high, in part because of the recovery in demand for jet fuel and diesel fuel.