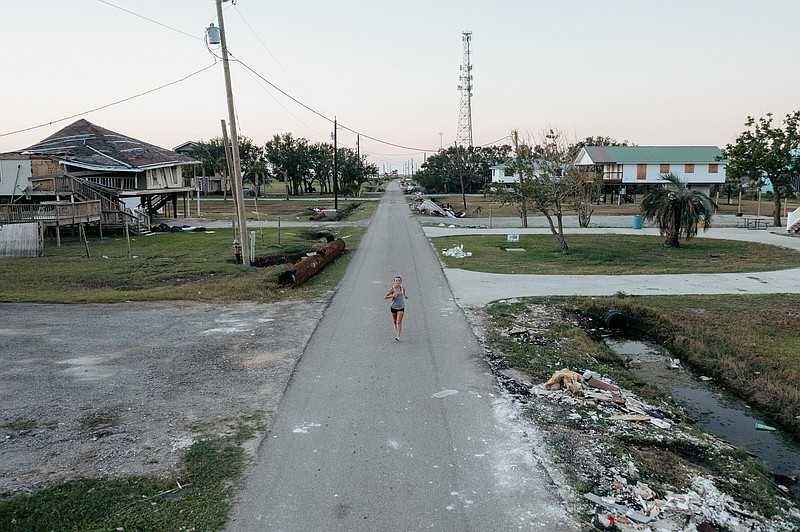 Londyn Resweber, 14, a member of the Grand Isle School cross-country team, runs down a street in Grand Isle, La., on Oct. 25. Hurricane Ida knocked down much of Grand Isle, but the town’s cross-country team was determined to compete in the state championship meet, which was held Monday. (The New York Times/Bryan Tarnowski)

GRAND ISLE, La. — On an afternoon in late October, Londyn Resweber, 14, ran into the twilight of disaster. Little was intact two months after Hurricane Ida pummeled Louisiana's only inhabited barrier island with sustained winds of 150 mph and a storm surge measured as high as 11 feet. Almost everything that holds a town together had been blown apart.

Londyn ran past Grand Isle School, which may not reopen for in-person learning until after Christmas. Past dunes of sand bulldozed from the main road. Past a Green Lantern action figure that someone placed on the beach in seeming hope and defiance, as if only a superhero could protect this resilient but vulnerable place against the next major storm.

For Londyn, running is one of the few things that remains familiar, habitual, customary. The Louisiana high school cross-country championships were Monday. Grand Isle is a power among the smallest schools: The Trojans won a boys' state title in 2016 and finished as runner-up in 2019 and 2020. Last year, as an eighth grader, Londyn finished fifth in the varsity girls' race. She aspired to win this year, training daily, posting her times online with her teammates, who remain scattered like roofing shingles across Louisiana, Texas, Alabama, Mississippi and Ohio.

Seven miles long, Grand Isle is a hive of rebuilding, hope and blue-tarp uncertainty. It serves as a vital storm-surge buffer for New Orleans, which is about 50 miles north across a vast estuary, and is renowned for its fishing and birding. But, in being battered regularly by storms, the island has become a stark symbol of the challenges that Louisiana faces with climate change: rising sea levels, coastal erosion, more muscular hurricanes, rapid intensification, heavier rainfall.

The runners, their coach and school officials hope that competing in the cross-country championships signaled, in some small way, that this drowned island is determined to regain its buoyancy.

"You've got to pick up the pieces," Londyn said.

Grand Isle School coach Denny Wright and his wife, Peggy, store their belongings in the car they have been living out of since Hurricane Ida. (The New York Times/Bryan Tarnowski)
Fortunately for her family, their home, built nearly 20 feet off the ground, sustained relatively minor damage. But most everything on the island seemed battered and oddly rearranged when they returned after evacuating to Mississippi. An aluminum boat was creased and folded like a dollar bill. Two-by-4s had blown off a nearby roof and stuck into the side of their home like arrows. For a time, the family flushed the toilet and washed their hands with treated water pumped from the swimming pool. They bathed with boxes of water heated on the porch by the sun.

"They looked like boxes of chicken broth," Londyn said.

Her grandfather is the police chief of Grand Isle and her father is a state trooper, both bound by duty to be here while the island tries to recover. But Londyn was the only member of the cross-country team to have returned by late October. Perhaps as few as 150 of the town's 1,400 permanent residents were back, according to the mayor. Almost every home sustained damage; 25% were destroyed.

The regional energy company had restored electricity with mega-generators, but Grand Isle's water was still not drinkable. Donations of bottled water were available at the school. Internet connections remained spotty. Fifty-two of the 136 students who attended Grand Isle School before the hurricane in pre-K through 12th grade had enrolled elsewhere.

People here are adaptable and deeply rooted, but it is anyone's guess how many dispersed students will return to Grand Isle when school reopens. Only 20 children could be found for a community Halloween party. Christine Templet, the principal, fears that virtual learning — forced last school year by the coronavirus pandemic and this year by the hurricane — will be insufficient.

"I really worry about their ability to have this learning stick with them," Londyn said. 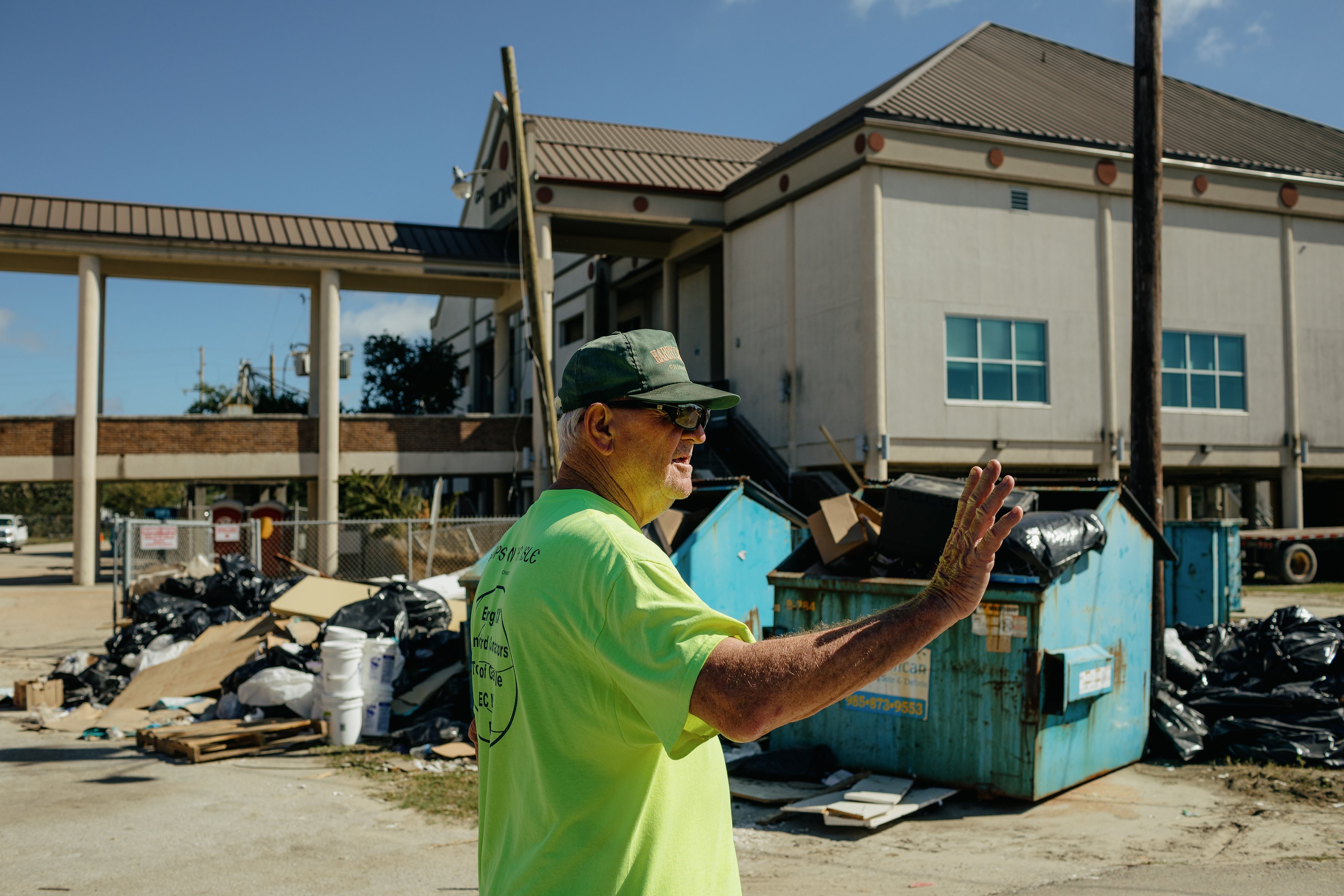 Grand Isle School coach Denny Wright walks by the school in Grand Isle, La. “I know the island is coming along. But what coming along means, I don’t know,” Wright said. (The New York Times/Bryan Tarnowski)
WORTH THE COST

Local, state and federal officials are facing hard questions about what resources should be put into restoring the island. A recent headline in The Times-Picayune/New Orleans Advocate asked a searing question: Is Grand Isle worth the cost of protecting against another storm with the destructive power of Ida?

"People are devastated mentally, emotionally, financially," said Denny Wright, 70, a physical education teacher at Grand Isle School and coach of the girls' and boys' cross-country teams and the boys' basketball team. "I know the island is coming along. But what coming along means, I don't know."

He and his wife, Peggy, have driven more than 4,000 nomadic miles since the hurricane struck Aug. 29, staying with friends and family in Louisiana, Mississippi, Alabama and Tennessee. In late October, their clothes hanging from a rack in the back of their SUV, they returned to Grand Isle to check on their home. It sustained roof damage during the hurricane, leaving moldy cabinets hanging from the walls. Contractors had since gutted the place and installed new drywall.

Peggy Wright, 67, stood on the porch, surveyed her skeletal house and catastrophic damage to others nearby and worried that many people would not be able to afford to return, given the cost of insurance and rebuilding. Tears rolled down her face.

For 48 years, Denny Wright has been a coach, mostly of basketball at the college and high school level, "always calling a timeout somewhere."

He sat in the shade of his carport and, using his laptop and a hot spot, taught a physical education class to eighth graders. With the state cross-country championships, he told Jaide McCullough, 13, and another of his evacuated runners: "Y'all need to pick up the pace. We need to make sure we're pushing ourselves."

Logan Camardelle, 18, a senior who finished 10th in the state meet as a sophomore in 2019, is living with his sisters in Austin, Texas, and San Antonio while taking classes virtually at Grand Isle School. He runs outside with his brother-in-law and sometimes jumps on a treadmill for a few miles. Fluid buildup in his knees forced him to stop training for a brief period, but Camardelle said he would return for the championship.

"When I got 10th, I felt so good and I could imagine getting a better place, top five," he said.

He is a cousin of Grand Isle's longtime mayor, David Camardelle, 65, who frequently says that he will remain in Grand Isle as long as there is enough sand to plant an American flag. Logan yearns to return home, for the beauty and tranquility of the island, for the discipline of cross-country running and basketball, but he knows that storms will keep coming. A friend of his father's lived in a $210,000 house on the beach for only two months before it was wrecked by the hurricane.

"I don't know how many people's houses can withstand something like that again," Logan Camardelle said.

David Camardelle speaks of Grand Isle being "the first line of defense" for New Orleans. He has urgently called for more large rocks to be placed just offshore in the Gulf of Mexico to serve as breakwaters and to preserve Grand Isle's beach. And he has called for clay, not merely sand, to fill the fabric tubes that serve as the spine of the island's 13-foot dune and levee system. The structure, known locally as the burrito levee, ruptured in places during the hurricane, leaving 5 feet of sand along sections of Louisiana 1, the only road in and out of town.

Peggy Wright (right) and friend Mark Scardino survey damage to the home Peggy and her husband, Denny, lived in before Hurricane Ida, in Grand Isle, La. “Ooh, my heart,” was all she could muster. (The New York Times/Bryan Tarnowski)
VULNERABLE COAST

At a recent meeting of the Louisiana Coastal Protection and Restoration Authority, its chairman, Chip Kline, said the federal government needed more creative ideas to shelter Grand Isle. During Hurricane Ida, the sand levee melted in spots like sugar in coffee. Many scientists have expressed support for programs to assist people in moving from Louisiana's vulnerable coast, where federal resources for recovery and rebuilding could drain away as storm damage becomes more widespread.

"It's not a question of if Grand Isle at some point becomes completely unlivable; it's a question of when," said Torbjorn Tornqvist, a coastal geoscientist at Tulane University. "That applies to a lot of places in Louisiana. Ultimately, that applies to New Orleans as well."

Bobby Jackson, 15, a sophomore cross-country runner and basketball player at Grand Isle School, was training five days a week before the storm. He evacuated with his grandparents to Robertsdale, Ala., and planned to compete in the state meet even though he had lost enthusiasm to train for it.

"I'm used to training with all my teammates," he said. "They push me. I don't have that here."

His grandparents' home, where he lived, lost its roof during the hurricane and most of the interior was ruined, he said. The fiberglass backboard on his basketball goal was shattered. He is not certain that his grandparents will return to Grand Isle. They are aging and, he said, "It's hard to go back to something like that. Depressing. It's going to take forever to rebuild."

His father, a fisherman, has remained in Grand Isle. Bobby said he will join him if his grandparents do not return once school reopens. He hopes to play basketball.

"I refuse to go anywhere else but the island," Bobby said. "To me, it's perfect."

The Reswebers feel the same unwavering attraction. As Londyn ran several miles through town in late October, she passed a reopened restaurant whose marquee was a spray-painted door scavenged from the storm. Green street signs were scoured white by wind and sand. Narrow streets felt like tunnels of devastation.

She would try her hardest to improve on her fifth-place finish at last year's cross-country championship, Londyn said.

The Louisiana High School Athletic Association's cross-country championships were held Monday, with the results posting too late to publish in this report. To check the results visit https://www.lhsaa.org/cross-country