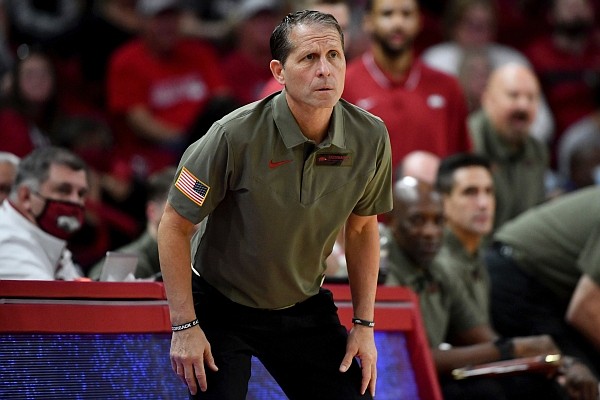 FAYETTEVILLE -- Coach Eric Musselman's University of Arkansas men's basketball team remained at No. 16 in The Associated Press poll released Monday after a 2-0 start.

The Razorbacks' recruiting class is ranked much higher.

"It's great company to be in," Musselman said Monday. "It's hard to be in the top 10, let alone in the top three or four or whatever.

"I think the big thing is, you want those players when their time is up, that they've developed properly and go on to have great careers. I'm ecstatic with each of them."

Smith, from North Little Rock, is rated a 5-star recruit and the No. 6 player nationally by ESPN. He's the third-highest rated signee ever for Arkansas behind Corliss Williamson and Al Jefferson.

Williamson, a 6-7 power forward from Russellville, ranked as the No. 1 or No. 2 high school player by every recruiting service. He was an All-American who led the Razorbacks to the 1994 national championship as a sophomore.

Jefferson, a 6-10 center ranked the No. 3 player nationally, never made it to Arkansas and instead was an NBA first-round draft pick by the Boston Celtics at No. 15 out of Prentiss (Miss.) High School.

"Nick is a special, special player," Musselman said. "He was as good as any player at the highest, highest level of AAU.

"I don't think I saw anybody even close to him at times. Confidence-wise, being able to go from an off guard to a point guard."

Walsh, from DeSoto, Texas, and Link Year Prep in Branson, is rated the No. 7 player nationally by ESPN.

"It is just incredibly exciting to watch Jordan play," Musselman said. "He's electric. He can play a lot of different positions. I can tell you right now, he's as athletic as anybody in college basketball."

Ford, from Magnolia, signed with the Razorbacks on Sunday. He's a 4-star recruit rated the No. 55 player nationally by 247Sports.com.

"Derrian is a guy that's so strong, so explosive," Musselman said. "He physically has the body of a college player."

Dunning and Pinion are 4-star recruits and rated among the top 100 players nationally by ESPN with Dunning at No. 76 and Pinion at No. 93.

"I think to keep the three in-state guys was really important," Musselman said of Smith, Ford and Pinion. "But all the guys are important. All five of them have significant importance to us."

This is the second top-five signing class Musselman has put together at Arkansas.

The 2021 class with guards Moses Moody, Davonte Davis and Khalen Robinson and forward Jaylin Williams -- all from Arkansas -- was ranked No. 5 by ESPN.

Moody started all of last season, became a first-team All-SEC player and AP honorable mention All-American and was a first-round draft pick at No. 14 by the Golden State Warriors. He was the first one-and-done NBA player for the Razorbacks.

Davis and Williams joined Moody in the starting lineup for Arkansas' NCAA Tournament run to the Elite Eight and are starters this season. Robinson was sidelined after 11 games last season because of foot surgery as a freshman, but is playing this season.

Chance Moore, a 6-5 guard, is the Razorbacks' only freshman signee this season as Musselman brought in six experienced college players through the transfer portal.

"I've done enough history to see that there's going to be some peaks and valleys with classes," Musselman said of high school recruits from Arkansas. "Which is great, because it kind of times everything up perfectly, to be honest with you.

"We're pretty stoked with Moses' class and now we have another group. To me, it's awesome."

Moody's highest ranking as a recruit was No. 37 by 247Sports.

"Last year at this time, I had no idea Moses was going to be a one-and-done," Musselman said. "Certainly when he committed and signed, we thought that was a possibility. He wasn't on many mock drafts. He was for the following year.

"But he had a great year. It was an easy decision. It was a great decision."

Musselman, who is 56 and coached on the pro level for 25 years before breaking into the college ranks, said what Moody accomplished last season helped him set higher goals for recruiting.

"It was good for me at my age to coach a guy like Moses," Musselman said. "We've got to go get more guys like that.

"And that's why this class is what it is, because we understand the significance. And also, transfers, quite frankly, are being completely over-recruited right now.

"There's a lot of mistakes in the transfer market -- a lot. It wasn't that way four years ago, but now a lot of Power 5 teams are going after transfers that probably aren't Power 5 players, to be completely honest.

"So we made a conscious effort a year ago to let everybody else go chase transfers and let's try to get involved with some of these high school guys. I'm happy we did it that way, to be honest."

With five seniors among the Razorbacks' 12 scholarship players this season, there is still one scholarship available for this recruiting class if the other seven players with remaining eligibility return next season.

But Musselman said it's impossible to know how the roster will shake out, given the increasing popularity of the transfer portal.

"What the total roster looks like next year, I don't know, just like everybody in the SEC doesn't know what their roster is going to look like," Musselman said. "I mean, you look at all the SEC guys that transferred and went to other SEC schools."

Seven players transferred from one SEC school to another after last season, including Jaxon Robinson from Texas A&M to Arkansas and Ethan Henderson from Arkansas to Texas A&M.

"I have no idea what the roster will look like, because I don't think anybody does in any sport right now, especially in men's basketball," Musselman said. "That's just a truthful answer. We'll have transfers, I'm sure."