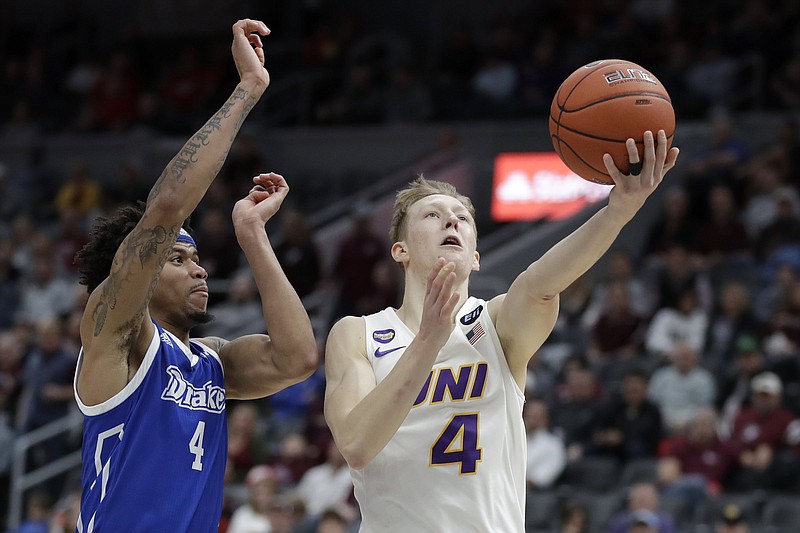 FILE - In this March 6, 2020, file photo, Northern Iowa's AJ Green, right, heads to the basket as Drake's Anthony Murphy defends during the second half of an NCAA college basketball game in the quarterfinal round of the Missouri Valley Conference men's tournament in St. Louis. (AP Photo/Jeff Roberson, File)

FAYETTEVILLE -- The last time Northern Iowa played a nationally-ranked team on the road two years ago, the Panthers beat No. 23 Colorado 79-76.

It was no fluke.

Northern Iowa is 25-22 against teams from Power 5 conferences the previous 15 seasons under Coach Ben Jacobson.

Starting with a sweep of Iowa State and Iowa during the 2006-07 season, the Panthers have beaten at least one Power 5 team in 11 of 14 seasons. Their game at Wisconsin last year was canceled because of covid-19.

Northern Iowa's Power 5 opponent this season is the No. 16 Arkansas Razorbacks, who take on the Panthers at 7 tonight at Walton Arena.

"We cannot bring our B or C game and expect to win," University of Arkansas Coach Eric Musselman said Monday night on his radio show. "If we don't come with our A game, they're going to do what they do every year, which is upset somebody and come away with a big win."

That's one more victory over a No. 1 team than Arkansas, which is 1-11 all-time.

"I like the fact that has happened with our program," Jacobson said of accumulating so many notable victories. "What comes to mind first is we've had some very good players.

"I've certainly enjoyed those games and doing it with the guys that we've had."

Northern Iowa (1-2) still has the bulk of its team that finished 25-6 during the 2019-20 season and won the Missouri Valley Conference championship with a 14-4 record.

"I think they're the most veteran team in all of college basketball from an experience standpoint playing at the same place," Musselman said.

The Panthers' record this season is deceiving, Musselman said, because they weren't at full strength in their first two games they lost 72-68 at home to Nicholls State -- favored to win the Southland Conference --and 71-57 to Vermont -- favored to win its sixth consecutive America Conference East title.

Northern Iowa redshirt junior guard AJ Green, the MVC player of year in 2019-20 when he averaged 19.7 points per game, was shaking off the rust last week after missing all but the first two games last season because of hip injuries that required surgery.

Green, averaging 9.3 points, is the MVC preseason player of the year. He averaged 22.0 points last year before being sidelined.

Sophomore point guard Bowen Born, the MVC freshman of the year last season, missed the first two games because of a wrist injury, but played off the bench in the Panthers' 95-58 victory over Dubuque on Sunday.

"They were banged up injury-wise their first two games," Musselman said. "They're now back healthy."

Jacobson has a 302-191 record at Northern Iowa and has led the Panthers to four NCAA Tournament appearances along with three MVC regular-season championships and four MVC Tournament titles.

"This team is really good," Musselman said. "We scheduled them because we thought they were a team that could win their conference.

"Obviously, they've got some other good schools in their conference, but that's what we think of them. I think their coach is one of the best coaches in the country."

Jacobson said the Panthers were dealing with getting healthy last week, but that they also need to improve on offense and defense.

"I feel like we certainly need to do better and should have done better in terms of defensively with some rotations and covering up some actions that we had scouted," he said. "Some things offensively in terms of execution and pace."

Arkansas, which is 19-0 in nonconference home games under Musselman, beat Gardner-Webb 86-69 last Saturday after building a 31-point lead.

"We knew when we scheduled Arkansas that we were going to be playing one of the top teams in the country," Jacobson said. "They have the versatility to put a big team on the floor and a very effective team, but can go a little bit smaller and still be a very effective team.

"They play really hard and put constant pressure on you with their transition offense and picking up full-court man defense. They get to the offensive glass and run good stuff in the half-court.

"He has the ability to score in all ways. His range is good on his jump shot. He can shoot it off the bounce, going either way. His catch and shoot is good. His mid-range game is good."

"They run offense through him, and he can score the ball as well," Musselman said.

"He's an important guy for us," Jacobson said. "He's got a big body, but he's mobile and he does pass the ball well.

"He's a guy that we'll throw it and need him to get some points for us on the block. He shot quite a few free throws."

Northern Iowa 6-6 sophomore forward Noah Carter has hit 6 of 14 three-pointers this season and is averaging 10.0 points off the bench. He hit 34 of 109 (31.4%) three-pointers last season, including 9 of 13 in the opener against Western Kentucky.