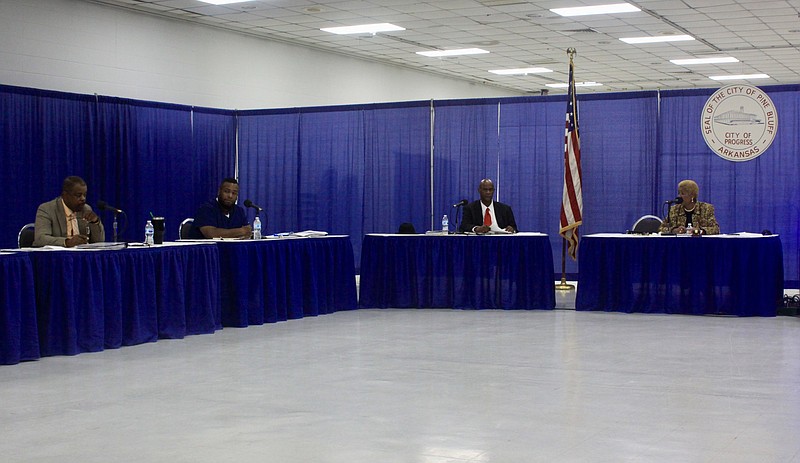 Pine Bluff council members meet Monday at the Convention Center to go over ideas on how to use funds from Go Forward Pine Bluff. (Pine Bluff Commercial/Eplunus Colvin)

Council Members Ivan Whitfield, Glen Brown Sr., Steven Mays and Bruce Lockett voted to take funds now being used by Go Forward Pine Bluff and the Urban Renewal Agency, which is funded by GFPB, to remove blight and redevelop the city and instead use the funding for a new firetruck for the Fire and Emergency Service Department, for the purchase of cameras and other equipment for the Pine Bluff Police Department, and for acquiring property where a racetrack is proposed.

According to City Attorney Althea Scott, Go Forward Pine Bluff's five-eighths percent sales tax is a city-use tax that could be used for general purposes by the City Council. But if the money is approved for GFPB for the next year, as has been done in the past, then the funds cannot later be pulled back. Council members saw an opportunity to create line items on the budget to fund other pressing needs using the five-eighths percent sales tax while others felt the move would cause problems with projects currently in process or underway.

"I support this on the basis we need to set priorities for the city with our tax dollars now," said Lockett, who agreed that purchasing a firetruck was needed.

Whitfield said the need for the firetruck was long overdue, a request the fire chief has made year after year. He said the available funds should be used in public safety.

The amount and payment schedule would be the same for the Police Department camera equipment.

A sum of $1 million was also requested to acquire the property for the drag strip, which is proposed at a location near Grider Field Airport.

Council Member Glen Brown Jr. said that while he was in support of the resolutions, he didn't support going into the sales tax.

"I don't think that is the right decision to make," said Brown Jr., who has noted that the $4 million Pine Bluff Aquatic Center loan was being paid for with the GFPB sales tax proceeds. "A lot of those monies are committed to projects, some which have already started. Pulling money from the sales tax is creating a bigger problem."

Brown Jr. also said it would not be good to break a promise to the voters about what the funds would be spent on. Organizers of GFPB worked for more than a year getting input on what Pine Bluff needed to do to upgrade a number of areas and in 2017 went to voters to ask for money to fund those improvements. Voters approved the tax increase, which sunsets after seven years. The Pine Bluff City Council voted successfully in 2019 to take a large chunk of the GFPB tax proceeds, but that vote was rescinded on the promise that other funding would be found to pay for needed expenditures.

Brown Jr.'s father, Glen Brown Sr., disagreed with his son and said he felt that as members of the legislative body, they control the tax money and should be able to use it for anything dealing with the city.

GFPB CEO Ryan Watley said during public comments that diverting the tax dollars would violate city ordinance 6647, and Chandra Griffin, interim executive director of the Urban Renewal Agency, suggested the council spend time developing a comprehensive financial plan to continuously fund needed equipment for the city and for initiatives and not use GFPB's tax money as a "one-time fix."

"My concern is the abrupt change that these resolutions will have on the impact and the goals for Urban Renewal and its mission for blight removal and redevelopment on Third and Fourth on Main Street, proposed downtown housing between Walnut and Pine streets and proposed Go-Kart at 2100 Harding," said Griffin. "The opportunity to continue will be interrupted and possibly stopped with these resolutions."

Council Member Joni Alexander was torn, as the racetrack was a venture she has worked on for several months. Several supporters packed the room as she voted against all three resolutions, including the drag strip.

Alexander said buyers from across the United States have reached out to the property owner to purchase the land before the city could, with some attempting to prevent Pine Bluff from having a drag strip.

"The council technically does not have a pot to you-know-what in and a window to throw it out of," said Alexander. "It is insulting that we even have to ask Go Forward, the mayor's special project fund or A&P for money."

Alexander expressed frustration, saying council members are not allowed to play a part in developing a vision for Pine Bluff and are relegated to simply approving the payment of the city's bills.

"Other people have a vision that they are able to pursue; we do not," said Alexander. "It's frustrating to be in this position because we are the ones being held accountable."

As her defense for Go Forward Pine Bluff took a turn to the negative, other members of the council said they didn't see how the public-private relationship was working in their favor, either.

Mayor Shirley Washington said the private-public relationship was respectful and that the projects executed so far were moving the city forward. Washington said that plans were already in the works and discussions had already been had on acquiring a firetruck and cameras for the Police Department.

Alexander and Whitfield both said that if they had known from the mayor's office that plans were already being discussed, these items would not have been placed on the agenda, and they suggested better communication going forward.

Lockett, however, said the private-public relationship wasn't working for the council, and Whitfield said he felt as if city projects were taking priority over public safety.

"When the council says they want to do something, we hear, 'Oh, we have promises to keep,'" said Lockett. "I'm saying this partnership is broken."

Whitfield said he was disappointed that all resolutions had failed for a lack of a majority.

The City Council did agree to a resolution that would support the funding and development of the Delta Rhythm and Bayous Cultural District Blues, Arts and Wellness Plaza.

According to the resolution, Jimmy Cunningham Jr. with the Pine Bluff/Jefferson County National Heritage Task Force will apply for a grant of up to $2 million to the United States Department of Commerce Economic Development Administration.

The city would match a required 20%.

"We are very excited about what we're doing with the Pine Bluff/Jefferson County Heritage Trail Task Force, A&P and the Delta and Rhythm Bayous Alliance," said Cunningham. "We have come together and built what is effectively the largest outdoor commemorative blues and soul venue in the United States."

With those funds, the city will purchase downtown property for the development.

The Parks and Recreation Department will manage, maintain and oversee the completed project.

In other city business, a resolution authorizing the mayor to execute an agreement with DataScout LLC regarding the revision of the city's voting districts to reflect the 2020 census data was approved.

Washington said she hopes to have voting districts that reflect the population changes by January. 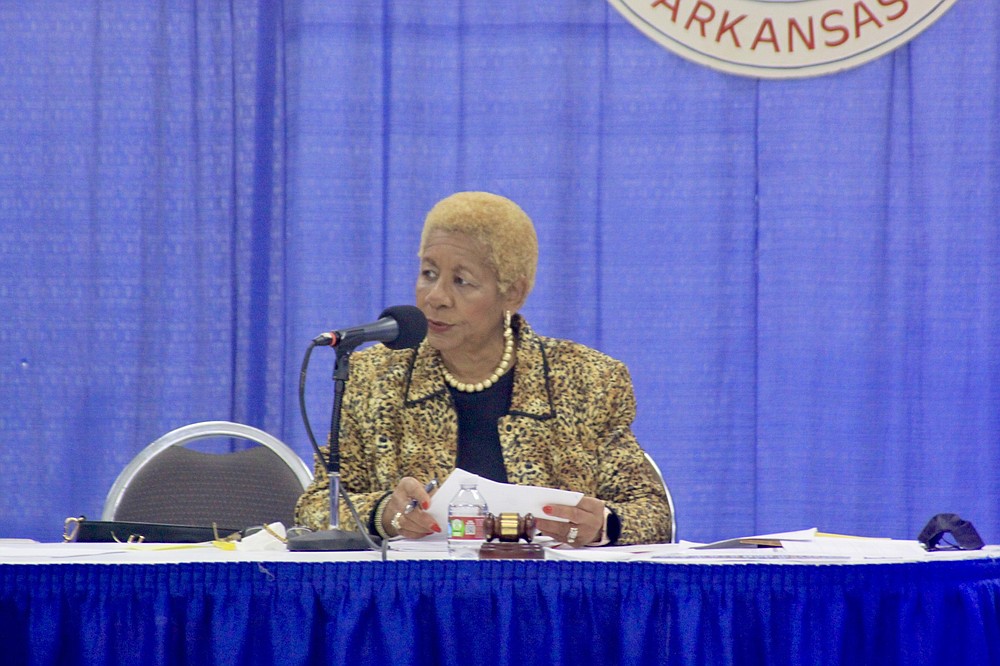