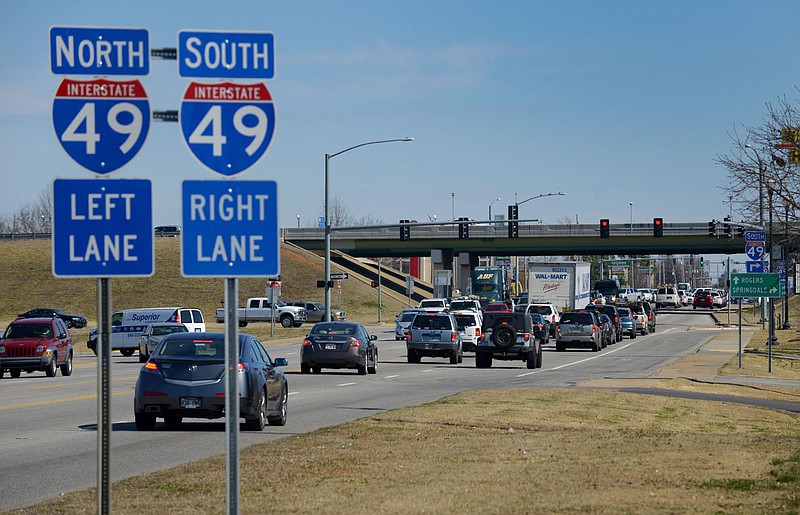 FILE — Traffic moves along at the intersection of S.E. Walton Boulevard/W. Walnut Street and Interstate 49 at the city limits of Bentonville and Rogers in this Feb. 26, 2016 file photo. (NWA Democrat-Gazette/BEN GOFF)

Shares of electric vehicle maker Canoo were up nearly 24% Tuesday, a day after the company said it plans to establish a headquarters and other facilities in Northwest Arkansas.

Late Monday, Canoo said it will locate its company headquarters in Bentonville along with a production facility for small package delivery vehicles while adding a research and development center in Fayetteville. The operations and other investments by the company are expected to bring a minimum of 545 jobs to the Benton and Washington counties, according to Canoo.

[Video not showing up above? Click here to watch » arkansasonline.com/1117canoo/]

"Canoo's investments in Bentonville and Fayetteville will have a transformative impact on the region's already fast-growing economy," Nelson Peacock, president and chief executive officer of the Northwest Arkansas Council, said in a Tuesday statement. "Gaining more than 500 cutting-edge jobs in the electric vehicle sector offers Northwest Arkansas the opportunity to become a hub for a burgeoning industry with growth potential on a global scale."

In response to emailed questions Tuesday, Canoo said it would provide more details on where exactly the operations would be located and timelines on hiring when that information is available.

Canoo also said Monday it plans on further development in Tulsa, including research and development, software development and customer support operations. It said in June it will open its U.S. manufacturing facility in Tulsa on 400 acres in the MidAmerica Industrial Park which will include a production plant.

The Tulsa operation is expected to open in 2023 and employ more than 2,000. While the new facility is being built, Canoo is working with VDL Nedcar to bring its first vehicle to market by the fourth quarter of 2022.

During its Monday earnings call for its third quarter for fiscal 2021, Canoo Investor Chairman and CEO Tony Aquila said the company expects about $100 million in state and local incentives for its most recent plans in Arkansas and Oklahoma, on top of $300 million in incentives expected for the Oklahoma manufacturing operation. He said along with these deals, Canoo is targeting $100 million in vehicle orders with both states and universities in those states but those deals are not yet finalized.

Chelsea O'Kelly, director of communications for the Arkansas Economic Development Commission, said in an email the commission would disclose the incentive package for Canoo once it was finalized, adding the proposed incentives were all performance-based and linked to job creation and targeted wages.

During the third quarter earnings conference call, Canoo's Aquila said the Arkansas operation would be different from what is planned for Oklahoma. He said the Arkansas location will be used for product innovation, advanced prototyping and to produce vehicles for unique uses.

"We are designing for people who work hard, play hard and need something reliable, that will last and give you value," Aquila said in a statement at the time. "We're for the 99% not the 1%. Our vehicle line-up is built for the backbone of America -- to give you value so you can work smarter."