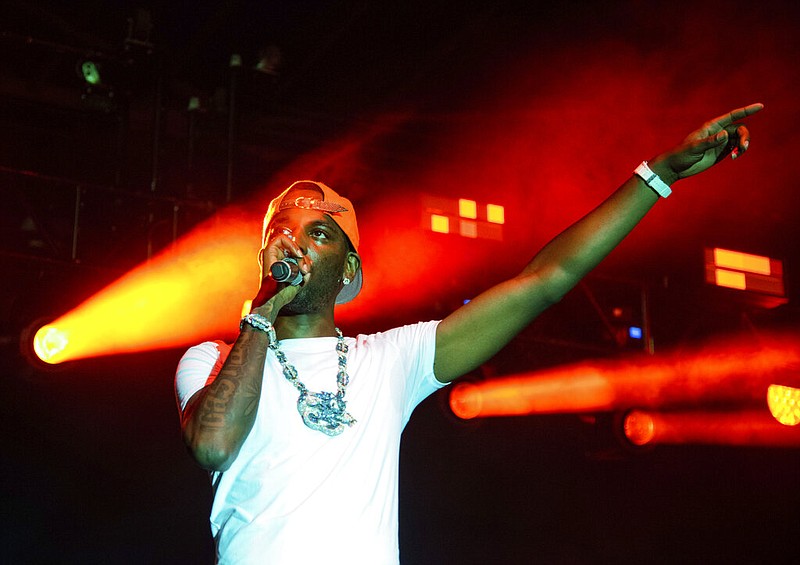 Young Dolph performs on stage at The Parking Lot Concert in Atlanta in this Aug. 23, 2020, file photo. (Photo by Paul R. Giunta/Invision/AP)

MEMPHIS — Rapper Young Dolph was shot and killed Wednesday at a cookie shop in his hometown of Memphis, and a search is underway for the shooter, authorities said.

Police tweeted that they had no information to release about a possible suspect in the shooting, which took place at Makeda’s Cookies near Memphis International Airport.

“The tragic shooting death of rap artist Young Dolph serves as another reminder of the pain that violent crime brings with it,” Memphis Mayor Jim Strickland said in a statement.

The Daily Memphian newspaper reported that Young Dolph’s cousin, Mareno Myers, said the rapper had been in town since Monday visiting an aunt who has cancer and was also giving out Thanksgiving turkeys.

“He was inside [Makeda’s], and somebody just rolled up on him and took his life,” Myers said.

Just last week, the cookie shop posted a video on Instagram of the rapper promoting the store’s cookies, saying he returns to the store whenever he is in Memphis.

Like the Los Angeles rapper Nipsey Hussle, who was killed in 2019, Young Dolph had been admired by many in the industry for his independent approach to the music business. His Paper Route Empire label retained control over his music.

The 36-year-old rapper was born in Chicago as Adolph Thornton Jr., and moved to Memphis when he was 2, according to The Commercial Appeal.

He released numerous mixtapes, starting with 2008’s “Paper Route Campaign,” and multiple studio albums, including his 2016 debut “King of Memphis.” He also collaborated on other mixtapes and albums with fellow rappers Key Glock, Megan Thee Stallion, T.I., Gucci Mane, 2 Chainz and others.

In his music, Young Dolph rapped about being a drug dealer and life on the streets in Memphis. He recently performed at a concert at the University of Memphis and has performed during the halftime of a Memphis Grizzlies game. He was admired in Memphis as a torchbearer of the city’s rap legends, Three 6 Mafia.

Young Dolph had survived previous shootings. He was shot multiple times in September 2017 after a fight outside a Los Angeles hotel. In February of that year, his SUV was shot at in Charlotte, North Carolina, more than 100 times. The incident was the inspiration for the song “100 Shots.” He said he survived because he had bulletproof panels in his vehicle, The Commercial Appeal reported.

Memphis officials, athletes and numerous members of the music industry posted their condolences on social media.

“R.I.P. to my friend Dolph this broke my heart,” Gucci Mane posted on Twitter.

Record producer Omen also posted a message on Twitter, saying, “we losing too many black men to poor health, racism, jail, etc. already. we gotta find a way to heal and not add to that with our own violence. prayers for young dolph family and friends. RIP.”

The rapper’s talent agency, APA, said it was shocked and saddened by his death.

“The world has lost an icon, a great man and beloved artist who has been taken too soon,” the agency said in a statement. “His dedication, drive, hard work and loyalty to all those around him always came first and he will be deeply missed.”

“I never knew what anxiety meant until My doctor just explained to me that I have it this morning,” another tweet posted that day said.

In an August tweet, he said: “Still can’t believe i got to where im at in life. still feel unreal.”

It is the fourth high-profile shooting in the Memphis area in the past two months. Others include a school shooting in which a 13-year-old student wounded a classmate, the fatal shooting of two postal employees by a third postal worker who then killed himself, and a mass shooting at a Kroger grocery store in the Collierville suburb that left two people dead, including the shooter, and more than a dozen wounded.