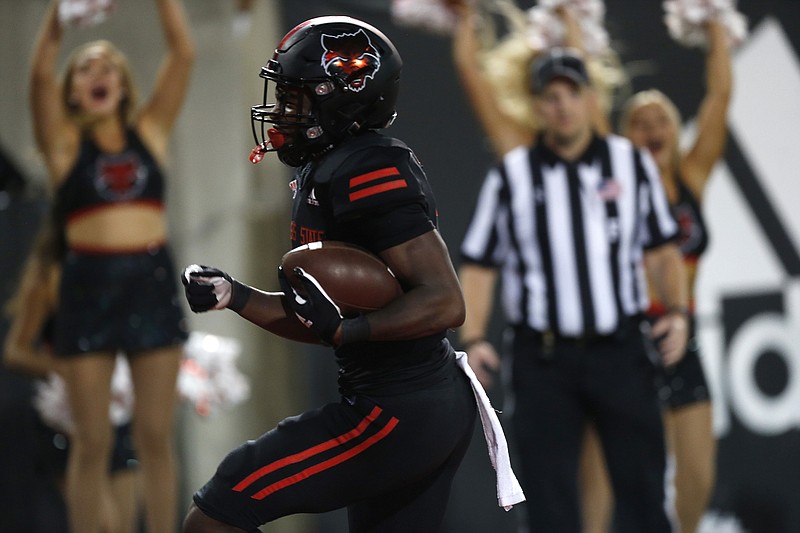 JONESBORO -- With Louisiana-Monroe running back Malik Jackson breaking through the Arkansas State defense on the first play of Saturday's second half, it felt all too familiar a scene.

It was a 75-yard score, the Warhawks' second touchdown in less than a minute of game time, and what was a 10-0 ASU lead had dissipated into a 14-10 deficit. When ULM added another touchdown at the 10:01 mark of the third quarter, the game seemed ready to unravel for ASU.

Sure, it's fair to rationalize one of the Red Wolves' better defensive performances of the season -- the Warhawks have the worst offense in the Sun Belt Conference, ranking among the bottom 20 in the nation.

But outside that six-minute stretch, ASU held ULM to three points in the Red Wolves' 27-24 victory. And it often looked like a group playing closer to its level rather than one that had given up 40-plus points in six of its previous nine games.

"Just based on the reps we've taken, we've grown more confident," ASU linebacker Caleb Bonner said Tuesday. "I really feel like that's what happened [in the second half]. People are more confident and want to make the plays, and now you're seeing the results."

With a new defensive coordinator and a new system, it's taken time for the Red Wolves to figure out who they're going to be on that side of the ball.

What's unfortunate for them is that three of the four players who were on the field for at least 70 of ASU's 78 defensive snaps won't be on next year's team -- Bonner, Joe Ozougwu and EJ Alexander will exhaust their collegiate eligibility. Another, Kivon Bennett, has just one year remaining.

It's all the more reason why the Red Wolves need performances from young players like the one they got Saturday from cornerback Samy Johnson, who had three tackles, allowed only one catch on three targets and hauled in the game-sealing interception.

"There are a lot of building blocks [in] that they're young," Jones said. "We have to have a great offseason but that'll be for the offseason. We have two games left and they're very, very critical."

Those final games, however, are perhaps a chance to see some of those young faces.

Parks played just 19 defensive snaps against Louisiana-Monroe and Hassler appeared only on special teams. Linebacker Charles Willekes -- a transfer from Michigan State with two more years of eligibility -- has seen the field in three of the past four weeks not after taking a defensive snap in any of the first six games.

Purely on the numbers, the Red Wolves' defense can only go up.

It's going to be incumbent on those who remain into next year to take them there.

"Just sticking together, that's the best part of this defense coming up," Ozougwu said. "There are some young guys that are developing and it's going to be a bright future for them."