Auction on 308 tracts within U.S. reserves first under Biden by MATTHEW BROWN AND JANET McCONNAUGHEY THE ASSOCIATED PRESS | November 18, 2021 at 1:48 a.m. 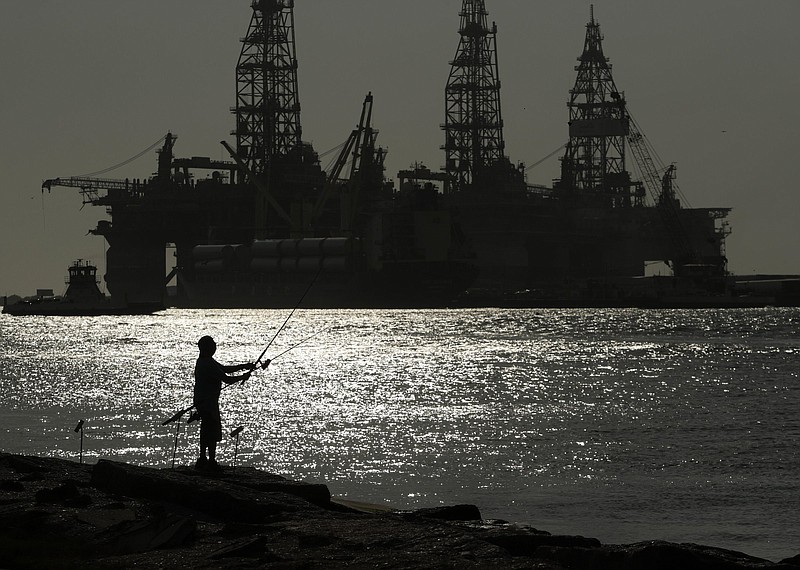 A man fishes near docked oil drilling platforms in Port Aransas, Texas. The U.S. Interior Department on Wednesday auctioned vast oil reserves in the Gulf of Mexico estimated to hold up to 1.1 billion barrels of crude. (AP)

NEW ORLEANS -- Energy companies including Shell, BP, Chevron and ExxonMobil offered a combined $192 million for drilling rights on federal oil and gas reserves in the Gulf of Mexico on Wednesday, as the first government lease auction under President Joe Biden laid bare the hurdles he faces to reach climate goals dependent on deep cuts in fossil fuel emissions.

The auction came after attorneys general from Republican states successfully sued in federal court to lift a suspension on federal oil and gas sales that Biden imposed when he took office.

Companies offered bids on 308 tracts totaling nearly 2,700 square miles during a virtual auction hosted by the Interior Department's Bureau of Ocean Energy Management. It marked the largest total acreage and second-highest bid total from a government auction since Gulf-wide bidding resumed in 2017.

Driving the heightened interest are a rebound in oil prices and uncertainty about the future of the government leasing program, industry analysts said. Biden campaigned on pledges to end drilling on federally owned lands and waters, which includes the Gulf.

"Prices are higher now than they've been since 2018," said Rene Santos with S&P Global Platts. "The other thing is this fear that the Biden administration is here for another three years. They're certainly not going to accelerate the number of lease sales and they could potentially have fewer sales."

It will take years to develop the leases before companies start pumping crude. That means they could keep producing long past 2030, when scientists say the world needs to be well on the way to cutting greenhouse gas emissions to avoid catastrophic climate change.

Yet even as Biden has tried to cajole other world leaders into strengthening international efforts against global warming, including at this month's climate talks in Scotland, he's had difficulty gaining ground on climate issues at home.

The administration last week proposed another round of oil and gas lease sales in 2022, in Montana, Wyoming, Colorado and other western states. Interior Department officials proceeded despite concluding that burning the fuels could lead to billions of dollars in potential future climate damages.

Emissions from burning and extracting fossil fuels from public lands and waters account for about a quarter of U.S. carbon dioxide emissions, according to the U.S. Geological Survey.

"The thing that is really bedeviling people right now is this conflict between the short term and long term when it comes to energy policy," said Jim Krane, an energy studies fellow at Rice University in Houston. "We still need this energy system that is basically causing climate change, even as we're fighting climate change."

Wednesday's livestreamed auction invited energy companies to bid on drilling leases across 136,000 square miles -- about twice the area of Florida. Federal officials estimated prior to the sale that it could lead to the production of up to 1.1 billion barrels of oil and 4.4 trillion cubic feet of natural gas.

Shell Offshore Inc., the largest leaseholder in the Gulf, said the 20 tracts on which it successfully bid $17.9 million could offer development opportunities near existing platforms or new areas.

"Regardless of today's outcome, the need absolutely continues for continued competitive leases in the U.S. Gulf of Mexico," said Shell spokeswoman Cindy Babski.

ExxonMobil bid nearly $15 million in two areas off the Texas shoreline. Those 94 tracts are in shallow water -- less than 656 feet deep -- where oil has mostly played out and there are few active leases.

Not far away in the Houston Ship Channel, Exxon is pursuing a government-industry collaboration that would raise $100 billion to capture carbon dioxide from industrial plants, carry it away in pipelines and inject it deep under the floor of the Gulf of Mexico, a process known as carbon capture and sequestration.

A company spokesman declined to say if there was a link between that proposal and the tracts it bid on Wednesday. Spokesman Todd Spitler said the company was evaluating the geology beneath the sea floor for "future commercial potential."

"We will work with the Department of Interior on plans for the blocks once they are awarded," he added.

Environmental reviews of the lease auction -- conducted under former President Donald Trump and affirmed under Biden -- reached an unlikely conclusion: Extracting and burning the fuel would result in fewer greenhouse gases than leaving it.

Similar claims in two other cases, in Alaska, were rejected by federal courts after challenges from environmentalists. Climate scientist Peter Erickson, whose work was cited by judges in one of the cases, said the Interior Department's analysis had a glaring omission: It excluded greenhouse gas increases in foreign countries that result from having more Gulf oil enter the market.

Federal officials recently changed their emissions modeling methods, citing Erickson's work, but said it was too late to use that approach for Wednesday's auction.

An attorney for environmental groups that sued the Biden administration over Wednesday's sale said it was held in violation of the law based on "incorrect data" that doesn't reflect its impact on the environment.

"By selling these leases, the Biden Administration is not solving the oil prices of today, but instead increasing the United States' climate heating emissions tomorrow," said Earthjustice attorney Brettny Hardy.