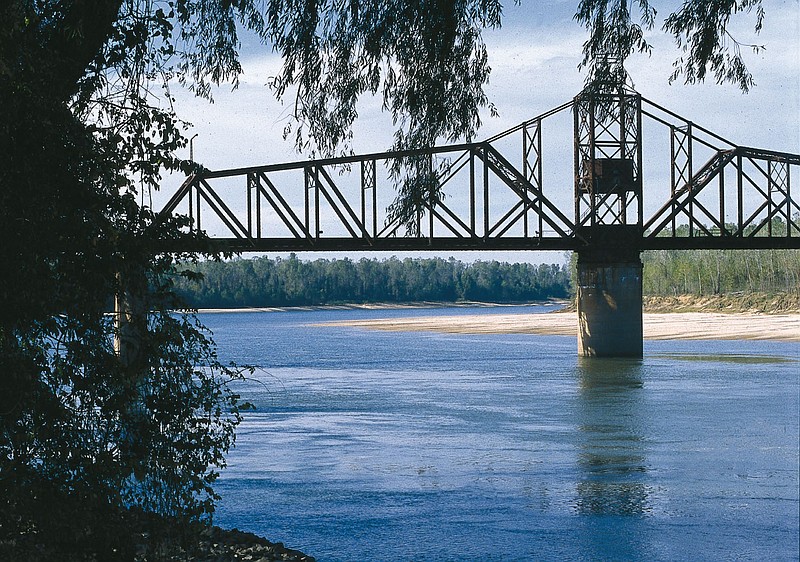 The lower Arkansas River flows past the Yancopin Bridge, part of the Delta Heritage Trail, in Desha County in this undated file photo.

The U.S. Department of Transportation has awarded a $20,482,208 grant to the Arkansas Department of Parks, Heritage and Tourism to construct the final 13.4-mile section of the Delta Heritage Trail, an 87-mile-long pedestrian and bicycle trail in southeast Arkansas.

The grant is being matched by $20 million from the Walton Family Foundation, which was announced in January 2020.

"This grant will enable State Parks to leverage the previous commitment from the Walton Family Foundation to generate new recreational and tourism opportunities from Lexa to Arkansas City, making a significant impact on the economy, quality of life and well-being of the Arkansas Delta," said Stacy Hurst, secretary of the Department of Parks, Heritage and Tourism.

Work is still being done on a 36.4-mile section of the trail, which includes the 13.4 miles being funded with the Department of Transportation grant.

Hurst said the entire trail is scheduled to be completed by 2025.

In July, members of Arkansas' congressional delegation sent a letter to Secretary of Transportation Pete Buttigieg advocating for funding for the project through the Rebuilding American Infrastructure with Sustainability and Equity grant program, according to a news release from U.S. Sen. John Boozman's office.

In 2019, an economic impact assessment indicated the completed trail is expected to create $7.7 million in economic benefits per year as well as new jobs and opportunities for the impoverished Delta region, according to the letter to Buttigieg.

"This grant is critical to completing this long-awaited project and will further stimulate the local economy," said U.S. Rep. Rick Crawford, a Republican from Jonesboro. He represents Arkansas' First Congressional District, which is where the Delta Heritage Trail is located.

"Our rich heritage and scenic landscapes make Arkansas the 'Natural State' and draw lovers of the outdoors from across the nation," said Crawford. "The Delta Heritage Trail provides a safe pathway for folks to enjoy the unique wildlife that can only be experienced in southeast Arkansas."

Gov. Asa Hutchinson said the grant will achieve a goal 30-years in the making.

"The completion of the Delta Heritage Trail will provide bikers and hikers yet another beautiful view of the Natural State and will highlight the beauty of the Delta," said Hutchinson. "I appreciate the advocacy of our federal delegation in winning this grant. This is another great project to enhance tourism in southeast Arkansas."

Portions of the trail are on levees or former railroad lines that have been converted to bike/pedestrian routes, according to the Walton Family Foundation's 2020 news release announcing its $20 million contribution.

"The compacted, crushed rock trail leads visitors through a variety of natural settings," according to the release. "From the shaded canopy of native hardwoods to the vast open skies alongside agricultural fields, guests can enjoy the diverse robust beauty of the Arkansas Delta."

Scott Fisher, a cyclist who lives in Pine Bluff, said he has ridden sections of the trail and its completion will be significant for the state.

Lexa, the northern point of the Delta Heritage Trail, is about 14 miles south of Marianna, which is the southern terminus of the 73-mile Big River Trail. That trail goes along the top of a Mississippi River levee northeast to Memphis.