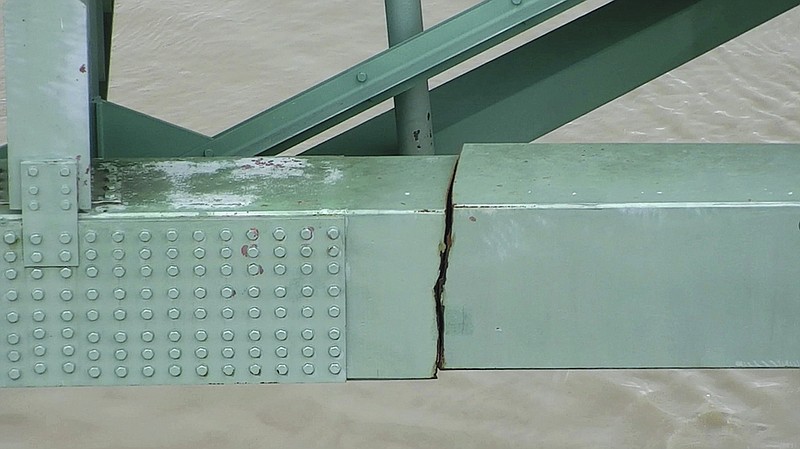 Officials with the Arkansas Department of Transportation told legislators Wednesday the decision to allow two veteran employees to retire instead of being outright terminated for their role in the months-long closing of the Interstate 40 bridge at Memphis was an act of compassion instead of an attempt to mislead the public.

Lorie Tudor, transportation director, presented to the Highway Commission Review and Advisory Subcommittee the results of the department's investigation into how the structural fracture at one of the state's major bridges was overlooked.

The results of the agency's investigation, a Federal Highway Administration review and a forensic analysis of the fracture all led department leaders to conclude that among the "changes/enhancements to strengthen and improve" the bridge inspection program was placing the heavy-bridge maintenance section "under new management," according to an After Action Report that the department prepared.

Rep. David Ray, R-Maumelle, asked Tudor if the retirement of Steven Hill, the heavy-bridge engineer and a 26-year agency veteran, as well as his assistant, Stewart Linz, a 36-year veteran, were connected to this report that concluded a failure in management when it came to bridge inspection.

Their section was responsible for inspecting and maintaining 60 of the largest and most unusual bridges in Arkansas, including the I-40 bridge connecting West Memphis and Memphis.

Tudor confirmed both were given the option to retire after they were found to be responsible for the failure to catch the fracture earlier.

"We felt they didn't manage the program the way it should have been and that is the reason why we felt new management was needed to move forward," she told the legislative body.

Rep. Frances Cavenaugh, R-Walnut Ridge, questioned Tudor on the reason the two engineers were even given the option to retire.

"Why didn't we terminate somebody for a job that could have cost millions of dollars and human lives?" she asked.

Tudor said they felt it was the decent thing to do.

"They were good engineers and it wasn't done intentionally," she said.

The two retirements came after the dismissal in May of Monty Frazier, the bridge inspector who missed the crack during inspections in 2016, 2017, 2019 and 2020. The 2018 inspection was performed by an inspector who had never examined the affected part of the bridge. He since has been counseled and will receive more training.

The review found that the culture fostered by heavy-bridge maintenance program management allowed shortcomings and shortcuts to be overlooked and suggested Frazier's deficiencies were common knowledge within the program.

"Management's failure to adequately act on reports by employees concerned with the terminated inspector's job performance perpetuated a culture where team members did not feel they had the authority or support to question a lead inspector's procedures or thoroughness," according to the report.

Ray said the statement on the two engineers retiring that was released to the press seemed too vague in his opinion since it didn't go into detail about their responsibility when it came to the bridge closure.

"Shouldn't you guys have proactively said something about this when it came to their retirement," he said. "Because if we didn't ask the questions, this wouldn't have been made public."

Tudor said as department officials navigated through this entire process, they wanted to be as transparent as possible, but when it came to personnel action, they wanted to take the high road.

"We didn't want to slam somebody in the press," she said "We tried to say it in a way that they can retain some dignity. We could have made it a lot different."

The partial fracture in the I-40 bridge was discovered by chance by an engineer with Michael Baker International under contract to inspect another portion of the bridge.

The engineer who discovered the crack immediately moved to have the 48-year-old bridge closed to traffic. The bridge, also called the Hernando DeSoto Bridge, is part of a major freight corridor that carries 40,000 vehicles daily, 30% of them big trucks. It took weeks to unsnarl the delays caused by the bridge closing and cost the trucking industry millions of dollars in delays and additional fuel use.

Mississippi River barge traffic also was briefly halted to allow time for crews to inspect the bridge and stabilize it.

In all, $10 million was spent to repair and inspect the bridge, according to the department's after-action report.

After being asked by Rep. Jimmy Gazaway, R-Paragould, Rex Vines, deputy director and chief engineer, told the committee he couldn't put an exact number on how close the bridge was to "catastrophic" failure, but the likelihood was high when the crack was discovered.

"It was very close to system failing," Vines said.

Robert Moore Jr., chairman of the Arkansas Highway Commission, expressed his confidence in Tudor and the direction of the Department of Transportation to the committee after the investigation was presented.

"We all know we are trying to learn from this situation," he said. "It has become a catalyst of an in-depth investigation into our bridge program and the director has acted very swiftly. She took ownership for the past and the after-action report summary details the correct actions we need to take and gives us a road map for the future."