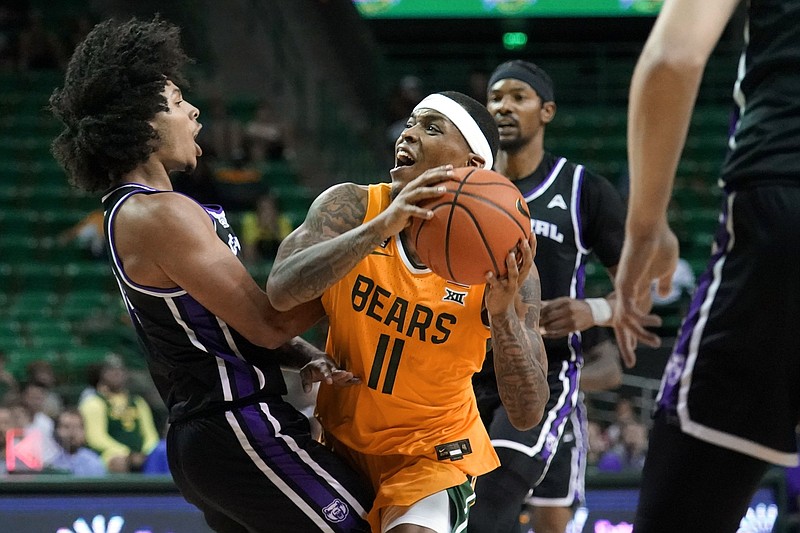 University of Central Arkansas guard Collin Cooper (left) takes a charge Wednesday on a drive to the basket by Baylor guard James Akinjo (11) during the second half of No. 9 Baylor’s 92-47 victory in Waco, Texas. (AP/Tony Gutierrez)

WACO, Texas -- That was quite a steal for ninth-ranked Baylor.

LJ Cryer scored 20 points for the second game in a row and freshman Kendall Brown had 19 in a 92-47 win over Central Arkansas on Wednesday night, when the homestanding Bears tied a school record with 21 steals while forcing 29 turnovers overall.

"Overall it doesn't matter who we play, we're always trying to lock in defensively and to be aggressive," Brown said. "Our motto is to speed them up and have them turn it over, and that's what we did."

James Akinjo, a senior transfer from Arizona, had 18 points and 10 assists for Baylor (3-0). Matthew Mayer had 12 points despite going 0 for 6 on three-pointers, and made a team-high five steals. Freshman forward Jeremy Sochan grabbed 13 rebounds.

The defending national champions extended their home winning streak to an arena-record 16 in a row.

Central Arkansas Coach Anthony Boone said he felt this year's Baylor squad, even after losing three standout guards, could beat the one that cut the nets down in Indianapolis last spring.

"I would love that to be the case," Baylor Coach Scott Drew said. "This year's team has got talent, doesn't have quite the experience of last year's team. Obviously, we haven't gone through the rigors of the Big 12, haven't played the meat of our non-conference schedule. ... We like the possibilities and the upside of this team."

Eddy Kayouland had 14 points for Central Arkansas (0-3), while Vincent Reeves and Darious Hall each had 10. Hall also grabbed 10 rebounds.

"Baylor is really good. They are very athletic, and they got us sped up," Boone said. "We haven't seen that kind of pressure yet. ... It was just a little bit of a shock, especially coming out in the first half."

Tyger Campbell had 13 points, making all four of his three-pointers, 6 rebounds, 6 assists and no turnovers in 26 minutes for the Bruins (4-0). Jules Bernard added 15 points. UCLA notched its third blowout win of the season, having beaten Cal State Bakersfield by 37 points and Long Beach State by 21.

The Ospreys kept it close in the first 10 minutes. Although they never led and once fell behind by nine, they got to 27-24 on a basket by Jonathan Aybar.

Mitchell averaged 18.8 points and 7.2 rebounds last season as a sophomore at Massachusetts and was on the all-Atlantic 10 Conference first team. He was one of seven players who joined new Texas Coach Chris Beard through the NCAA transfer portal.

The Patriots (4-0) let a 10-point lead dwindle to 59-56 before Cooper made a layup and Schwartz made a three-pointer for an eight-point cushion with 3:06 to go. That was just enough to provide George Mason with its first win over a ranked foe since 2007 and its first-ever victory over Maryland (3-1), which won the previous nine games against its Virginia-based opponent.

The Terrapins used a pair of three-pointers by Eric Ayala to get to 67-66 in the final minute before Josh Oduro scored inside for the Patriots. Ayala then missed a potential game-tying three-pointer, dooming Maryland to a humbling defeat.

Donta Scott had 18 points and 10 rebounds, and Ayala tallied 17 points for the Terrapins. 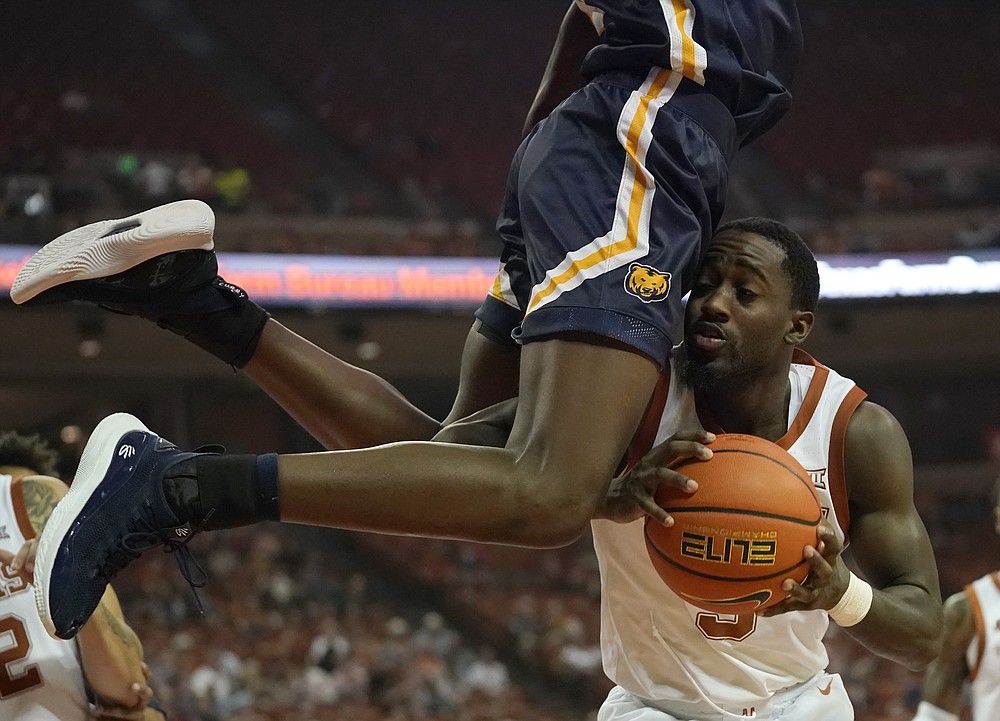