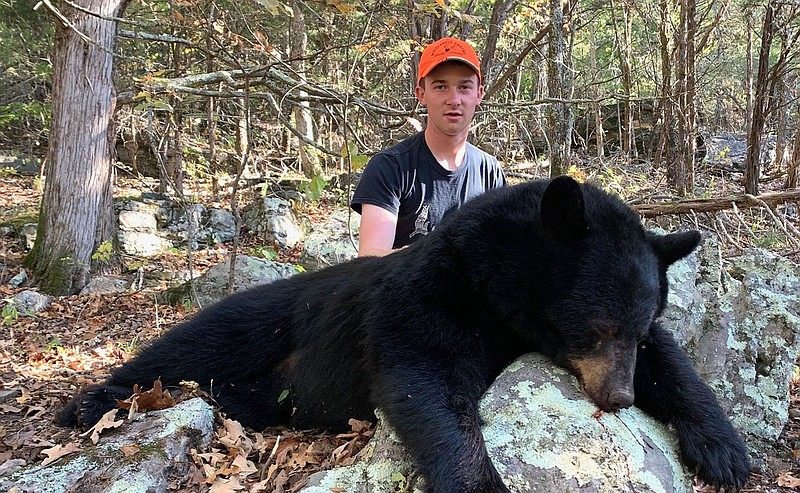 Wesley Spray, 15, of Myron bagged this black bear (shown) Oct. 20 while hunting with his father in the Sylamore Wildlife Management Area. He took an 11-point buck in 2019. (Photo submitted by Lisa Spray)

Seeing a black bear on public land in Arkansas is rare, but it happened twice to Wesley Spray of Myron (Izard County), in the same spot.

Spray, 15, a homeschooled student, missed a bear in the Sylamore Wildlife Management Area in 2020. He was disappointed, but on Oct. 20, while hunting for deer with a muzzleloader, a different bear appeared in the same place. This time, Spray's shot was true, and he checked in what he said was a mature sow that weighed 190 pounds after field dressing. Spray said its live weight was probably about 240 pounds.

"It wasn't the same bear as the year before," said Spray, who killed the bear in Trimble Hollow while hunting with his father.

Spray said his father Joseph knew the area from having hunted there years before. The terrain was exceedingly steep and rugged, but Spray said there was an abundance of food in the form of white oak acorns and muscadines.

"There was tons of really good sign," Spray said. "The spot I was hunting, I didn't think I would see deer, but I found bear sign. I missed one last year, but I was blessed to get a second chance."

Nestled amid the protective cover of big rocks, Spray said he was sitting under a big oak tree when, about 20 minutes before dark, he heard what he described as popping sounds.

"A bear walked out in a cedar glade about forty yards away," Spray said. "I waited for it to step out from behind the cedars, and I got a good shot on it."

The bear ran and crashed down a long, steep slope for about 100 yards. When the commotion stilled, Spray said he heard the bear in its death throes.

"I called my dad. He was hunting not very far from me," Spray said. "During the phone call, I heard several bawls, like roars. Dad said they make that sound right before they die."

Spray said he knew where the bear went, but he and his father didn't find enough blood to track in the gathering darkness.

"We almost walked over the bear, but the terrain was so rough that we didn't see it, so we decided to try to find it the next morning," Spray said.

In daylight, Spray said he and his father found the trail that the bear followed down the slope. The bear lay dead on a rock ledge.

Spray said he began hunting at a very early age, and that hunting is an essential part of his identity.

"It has always been a part of me," Spray said. "The older I get, the more I love being out in the woods."

With its abundance of game and hunting opportunities, the central Ozarks is an ideal place to grow up, Spray said.

"It's wonderful. I realize how blessed I am to live in this area," Spray said. "I just love this country. The terrain is beautiful. I just love being out in the woods, and even though I may not always take an animal, it's always refreshing to be out there seeing God's creation."

The bear is the latest in Spray's hunting adventures. In 2019, while hunting on his family's property, he killed an 11-point white-tailed buck that scored about 130 on the Boone and Crockett scale.

"I hunted almost every day the week before," Spray said. "From the sign I found, I knew there was a really good buck in the area. The second weekend of modern gun season, I hunted a spot where bucks chase does a lot. He came in silently into a cedar glade, and I got him with a 30-06, a Remington Model 700."

Spray, who loves to read history books and biographies, said he's considering becoming a surveyor when he completes his high school education. Already, his resume is eclectic.

"I work odd jobs for some people," Spray said. "I recently started doing just a little bit of concrete work."

Whatever vocation Spray chooses, it had better be flexible enough to allow some hunting time. 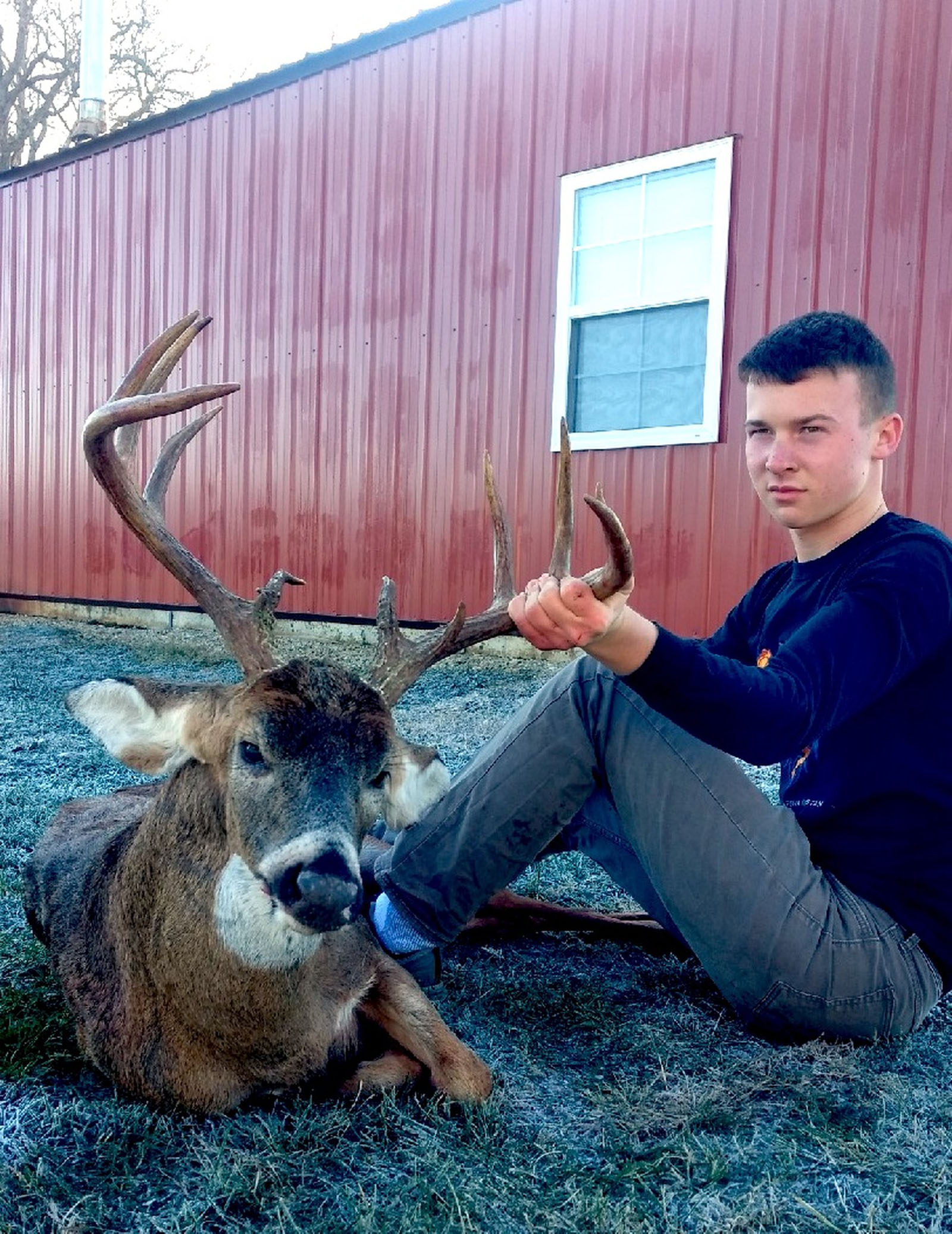 Wesley Spray, 15, of Myron bagged this black bear Oct. 20 while hunting with his father in the Sylamore Wildlife Management Area. He took an 11-point buck in 2019 (shown). (Photo submitted by Lisa Spray)
ADVERTISEMENT